“We were already in the process of putting people in hotels and taking them bottled water, and the Navy was still saying there was nothing wrong with the water.” 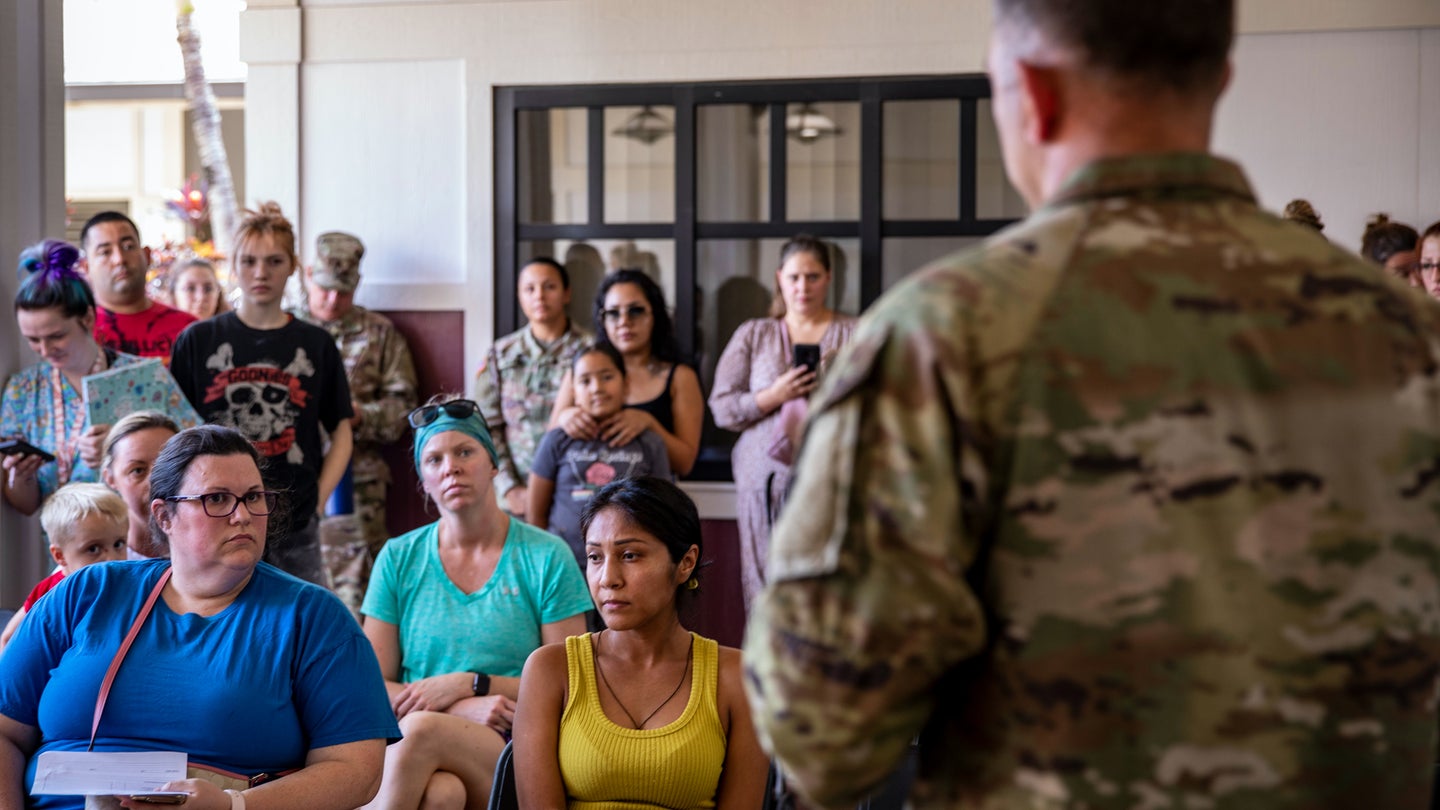 Amid a water contamination emergency in Hawaii impacting thousands of military families, the Army gave the Navy a master class in how to respond to a crisis. Where the Navy was criticized as slow, the Army was seen as fast; where the former was accused of being dismissive at times, the latter was praised for their handling of the situation. While the Navy said repeatedly on Facebook, at first, that preliminary tests showed no contamination in the water, the Army was sharing locations where residents could get clean water.

Internal messaging obtained by Task & Purpose, and public criticisms from residents affected by the water contamination issue at Joint Base Pearl Harbor-Hickam, shows a stark difference in how the Army and Navy responded to the crisis, almost from the very beginning. Since late November, military leaders in Hawaii have been responding to a fuel leak from the Red Hill fuel storage facility servicing Joint Base Pearl Harbor-Hickam and surrounding communities. The Navy fuel storage complex was built during World War II and serves roughly 93,000 people, supplying almost 20% of the drinking water in Honolulu.

The water smelled like chemicals and in many instances had an oily appearance, residents said. Families reported feeling sick after ingesting it, getting stomach pains, headaches, and nausea, and in one tearful testimony, a woman said her dog had to be put down after being sickened by the water.

“We are looking at every aspect of our response to the water incident, and continually adapt and look to improve how we communicate with our families and our communities,” Navy spokesperson Lt. Cmdr. Marissa Huhmann said in a statement. “We are committed to getting this right, and that includes listening to those impacted and communicating via multiple channels to address concerns and questions. We value the feedback we get and appreciate our community as we work together to provide support to those impacted and restore safe water.”

One Army official familiar with the service’s response in Hawaii recalled the very first town hall meeting that the Army held with the Navy in early December.

“The Navy was kind of trying to be very logical, trying to explain about their testing that said there was nothing wrong and … this lady gets up, and she’s very emotional, and she says, ‘But I can’t bathe my children.’ And you know, that’s that very instinctual, emotional-level argument, and they were just meeting her with logic,” the official said. “And as a mom sitting in the room, I was just kind of like, wow, this is two people speaking past each other. And, you know, with town halls, on one hand, a lot of leaders talk to their audience. But in fact, they are there to listen.”

A similar moment was captured on video days later when on Dec. 6, a Navy spouse confronted senior Navy leaders about the issue, saying her infant son was “throwing up for days on end” after drinking and being bathed in the water, and that she and her husband had a litany of “mysterious symptoms.”

“My husband has gladly and readily served this country,” she said. “And I have stood by his side and stood up for this community on a number of occasions … I have wrongly assumed that this leadership would be doing the same for us.”

The Navy began receiving reports from residents at Joint Base Pearl Harbor-Hickam that their tap water had a fuel or chemical smell on Nov. 28, though some residents have said that they were exposed before that. While the Navy owns the fuel storage facility at the center of the problem, the Army also has a significant footprint in Hawaii and saw some of its soldiers and families impacted by the fuel leak, specifically in the Army-owned Red Hill and Aliamanu Military Reservation (AMR) communities.

By Dec. 2, the Army stood up Task Force Ohana to help lead their response efforts, which included sending more than 250 soldiers door-to-door delivering water to residents. The task force worked out of a central location, where residents could get medical attention or veterinary services for their pets, as well as information about temporary lodging.

Since the first reports, over 3,000 military families have been forced from their homes, the Washington Post reported on Tuesday.

Huhmann, the Navy spokesperson, said both the Army and Navy began offering temporary lodging allowance and reimbursements on Dec. 3, yet the impression among residents remained that the Navy was not acting quickly enough. An Army senior non-commissioned officer in Hawaii told Task & Purpose that several of their soldiers were relocated to hotels because of the water contamination. All of them were “taken care of” by the Army, the soldier said, and “everything was really streamlined,” but it seemed the Navy lagged far behind.

“It seemed like we were lightyears ahead of them,” the NCO said. “We were already in the process of putting people in hotels and taking them bottled water, and the Navy was still saying there was nothing wrong with the water.”

Email communications obtained by Task & Purpose showed just how differently the Army and Navy responded to the crisis. Col. Jeffrey Schroeder, the chief of staff of the Army’s 311th Signal Command in Honolulu, said in an email to his team on Dec. 6 that a Navy town hall held the day before “did not go well as the residents were not happy with the lack of urgency, sincerity, empathy, and answers provided by Navy leadership.”

“There were no clear answers provided, still a lot of studying the problem going on,” Schroeder said in the email which was meant for internal situational awareness.

The next day on Dec. 7, Schroeder sent another email with updates regarding the contamination issue and the work Task Force Ohana was doing. In it, he said Chief of Naval Operations Adm. Michael Gilday “toured AMR and TF Ohana with Gen. Flynn to understand the Army’s effort.”

“There is still a messaging gap between the Army and the Navy as the Navy is stating the water is safe to drink, bath [sic], cook, and wash clothes in and the Army does not agree at all and deems the water unsafe to use,” Schroeder said.

On Dec. 8, Schroeder’s email said the messaging gap between the Navy and the Army “is closing,” but that the Navy was “still stating the water is safe to drink, bath [sic], cook, and wash clothes in since we don’t have any [additional] tests that have indicated contamination.”

“However, until we can render the environment safe the Army will continue to state the water [is] unsafe to use,” he said.

During the Navy’s first town hall, officials repeatedly told residents that their initial testing of the water did not detect an issue and that they were waiting on additional test results to determine the source of the contamination. But Kate Needham, a founder and the director of operations of Armed Forces Housing Advocates, a non-profit advocating for military housing families, said the repeated claim that the Navy had already tested the water when it was “obviously contaminated,” undermined the tests’ credibility.

“Just say it: It’s contaminated, and let’s make a plan to make it better. … There is no harm in telling the truth when you already have this huge cloud of doubt around you that, frankly, was self-induced at this point,” she said.

Although the Army may not typically be known for flawless communication, the service has had plenty of practice in responding to crises over the last year. The Army, and specifically the Army National Guard, had to respond quickly to the COVID-19 pandemic, assisting with testing and vaccinations in communities throughout the country; civil unrest in the wake of the death of George Floyd; an attack on the U.S. Capitol in January this year; and natural disasters like hurricanes.

The Army’s response over the last month has been praised by some residents. In the Facebook comments on a town hall meeting with residents and Army officials on Dec. 3, one person who identified themselves as a Coast Guard family member said the Army has “been nothing but amazing.”

“I’m [grateful] for every soldier who’s come to my home to bring water, filling my container full of potable water to providing hot meals,” the person said.

“All other branches are literally riding the coattails of what the Army has done,” another person commented.

A second Coast Guard family member commented that “we are feeling so blessed to be living under Army command. You’ve blown us away.”

The comments were much different on the same day during a Navy town hall. “So much more disorganized and cold hearted than the Army town hall,” one woman said.

“Ugh I almost wish I didn’t watch the army’s… I felt so good and cared about after that one… Then came over to this one and it’s just really saddening/disheartening,” another person said.

That sentiment still existed more than a week later, when on Dec. 14, one person commented during a Navy town hall, “Can we just have the Army run the show?”

And as the services look towards resolving the problem, Needham said there’s one major piece of the puzzle that is being left out: military families in the Exceptional Family Member Program, for those with special medical or educational needs.

The voices of those families are “getting lost in this,” Needham said. “It’s terrifying” for those families who chose specific military housing because of its proximity to a certain hospital, or for one family Needham mentioned whose child is now on more medication after ingesting the contaminated water.

“The EFMP families are getting lost in this as well because they have an entire other layer of problems they have to deal with besides just figuring out what hotel they’re going to be in that night,” she said.

And really, Needham said it all comes back to one main issue: That it is “high time that people who serve our country and their families get treated with the dignity and respect that they deserve.”