Roughly two and a half thousand Marines are flying halfway around the world just to spend two weeks in isolation amid the global coronavirus pandemic. 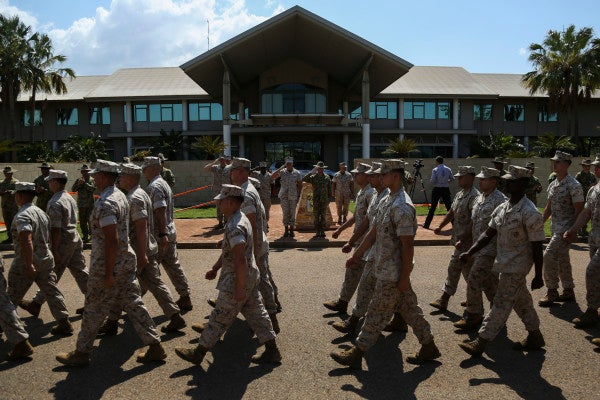 Roughly two and a half thousand Marines are flying halfway around the world just to spend two weeks in isolation amid a global coronavirus pandemic.

Stars and Stripes reports that Marines deploying to Australia as part of Marine Rotational Force – Darwin will start their scheduled six-month rotation with 14 days of self-quarantine in line with the coronavirus response adopted by the Australian government.

Health authorities announced the isolation period in mid-March to help halt the spread of the novel coronavirus that's sickened roughly 681 Australians, per the New York Times.

“Once we have ensured those quarantined are free of the virus, operations will proceed as scheduled,” Marine Corps spokeswoman 1st Lt. Bridget Glynn told Stars and Stripes. “We are taking all reasonable precautions to prevent the spread of the disease.”

The force of Marines, scheduled to arrive in the country between April and July, “will be restricted to their rooms with access to necessary supplies, until the isolation period has passed,” Stars and Stripes reports.

As of Thursday, the Defense Department had identified 51 service members who tested positive for the novel coronavirus.

Two weeks stuck inside during the balmy Australian autumn is a real bummer, especially since those Marines will likely end up in self-quarantine at the Robertson Barracks in the country's Northern Territory that's been the official home to the MRF-D since 2016.

And here's the thing: coronavirus quarantine sucks the big one. Consider the case of an anonymous soldier who described his isolation experience to The Daily Beast: cooped up in a 15-by-15 room with three other soldiers at Fort Bliss, subsisting on canned tuna and tortillas.

“Prisoners receive better care and conditions than that which we are experiencing at Fort Bliss,” the soldier told The Daily Beast. “The Army was not prepared, nor equipped to deal with this quarantine instruction and it has been implemented very poorly.”

There are two ways this could go down: either these Marines maintain an extraordinary amount of good order and discipline for two weeks and wait out the isolation period with good humor and a fighting spirit, or things descend into some Lord Of The Flies-style belligerence the likes of which Australia has never seen before.

Go ahead and guess which one is more likely.