After two weeks pent up at Marine Corps Air Station Miramar, the first group of coronavirus evacuees to arrive in San Diego finally got to leave Tuesday 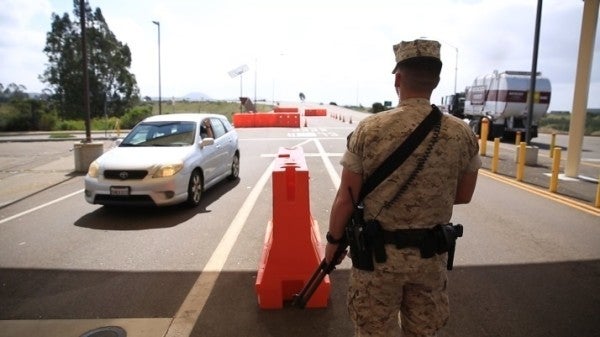 SAN DIEGO — After two weeks pent up at Marine Corps Air Station Miramar, the first group of coronavirus evacuees to arrive in San Diego finally got to leave Tuesday.

Shortly after a final round of health checks, a procession of white tour buses began rolling out, helping families and individuals quite literally get on with their lives after 14 days spent under constant monitoring by a group of public health workers keen on spotting every sneeze, sniffle or cough.

Two buses arrived at San Diego International Airport about 11 a.m. local time, spilling roughly 100 former evacuees onto the sidewalk. Many were wearing surgical masks as they moved to pull their bags from cargo compartments, every movement recorded by a swarm of television cameras. Others who live within driving distance had a quieter, less public departure, climbing into private vehicles once their time on base was complete.

The U.S. Centers for Disease Control said in a short statement that 166 of the 167 people who arrived from Wuhan, China, on Feb. 5 would depart for home Tuesday. One person on those first two flights tested positive for COVID-19 infection and remains in a UC San Diego Health hospital, as does a second who arrived on another flight that landed at Miramar on Feb. 7. There were an additional 65 people on that later flight, and all who pass health checks later this week are expected to depart, ending the current federal quarantine at Miramar.

Simultaneously, evacuees were released from other U.S. military bases, including San Diego resident Yanjun Wei, who finally made it home with her 3-year-old son Rowan Burnett and 1-year-old daughter Mia Burnett and who spent the last 14 days quarantined at Travis Air Force Base in Fairfield, Calif.

The CDC stressed that all those who were released Tuesday “pose no health risk to the surrounding community, or to the communities they will be returning to” after either showing no symptoms during what is believed to be the maximum incubation period for the coronavirus or testing negative after showing possible symptoms.

Confronted by a throng of media, many of the arrivals at the airport Tuesday morning declined to give their full names.

One man, who gave his name as John, said he was heading back to Minnesota with his wife. They had both been in Wuhan visiting her family and, when factoring in the Chinese leg of their quarantine, had been isolated almost a month, he said.

“We didn't leave the house in China for a little more than 10 days, and then Miramar for two weeks,” he said as he left the first bus from Miramar. “So, in total, about 24, 25 days (in quarantine). It is very difficult. It's exciting to be back.”

Another man, who said he was from Boston and gave his name as Phil, said he enjoyed the weather in San Diego but found the U.S. government didn't communicate well with the evacuees.

“The accommodations were nice, the government treated us well,” he said. “It could have been better organized … maybe they'll have a plan for the next one.”

He said the most stressful part of the ordeal he and his wife went through was just getting out of China.

“I was so paranoid that I wouldn't be able to get on one of the evacuation planes because of the difficulty getting to the airport from where we were in a car,” he said. “There were roadblocks, there were police everywhere — the highways were empty. It was quite unnerving.”

Toward the end of the quarantine, he said, people started loosening up.

“As our quarantine came to an end, our whole community started to have little social gatherings,” he said. “It started to become fun and sociable. It was nice toward the end.”

Phil agreed with John that communication from officials was lacking.

“We'd ask a question and the answer would be, 'Well, we'll get back to you,' ” he said. “That was a little discouraging, to not know anything. It would have been nice to have known what was going on a few days ahead.”

It was not all evacuees departing at Lindbergh Field on Tuesday.

Kenneth Burnett, a San Diego father and husband who told of the frustration of being in San Diego while his family was so far away, flew to Sacramento so he could accompany his wife and kids home.

Arriving at San Diego International on Tuesday afternoon, Burnett said the joy of reunification sneaked up on him a little bit.

“I wasn't too emotional until, but now I think it hit me,” he said.

Yanjun Wei smiled wearily at her husband as she pushed their daughter in a stroller, son Rowan excitedly wheeling around a piece of luggage.

“I desperately need some sleep,” she said. “I'm very emotional since the beginning, and now I'm just exhausted. I feel like my emotions have already shut down.”

Wei said that the accommodations at Travis Air Force Base, about 45 minutes south of Sacramento, were extremely comfortable.

But taking care of her two small children in quarantine has left her drained.

“They wake each other up, which has left me with very minimal sleep, like three to four hours at night, sometimes without a nap during the day,” she said. “The desperate need for sleep is the biggest challenge that I have at the moment.”

Wei said a staff member at the base regularly helped her with childcare so she could, among other things, take showers.

“If I wasn't having two little ones with me, I'd enjoy it like a getaway vacation,” she said.

Wei left her parents in Wuhan when she was evacuated by the U.S. State Department two weeks ago. She said she worries about them as the city of 11 million people continues to operate under quarantine.

While most seemed a bit stunned to find themselves at the center of so much attention after a fortnight in seclusion, some expressed their relief at finally getting to go home.

Some, such as Yu Lin, 48, of Minneapolis had been communicating with the public through social media since shortly after arriving at Miramar on a government-chartered flight from China.

Lin made it clear on Twitter that he, and many who wrote thank you notes for base staff, have appreciated the work that has gone into the quarantine effort. He posted a “graduation” picture Tuesday morning of his fellow evacuees throwing their medical masks in the air after clearing their final health checks, the final step before processing out of the quarantine area.

On Friday evening, UC San Diego Health hospitals were caring for two Miramar evacuees who had tested positive for COVID-19 infection last week, and had five more people in isolation rooms with possible coronavirus symptoms. A UC San Diego spokesperson said in an email Tuesday morning that all five had tested negative, leaving only the two positive cases still in hospital isolation rooms.

Meanwhile, Ben Capon and Nadine Bialostozky, a couple who grew up in the San Diego neighborhood of Carmel Valley and were on the Westerdam cruise ship in the South China Sea when the outbreak started, finally made it back to their apartment in Mexico City after their ship docked in Cambodia on Friday.

Capon said in an email Tuesday that he was stunned to learn that a fellow passenger who had been on the ship had tested positive and that Westerdam passengers still waiting to leave Cambodia would not, for the moment, be allowed to proceed to Malaysia and then on to their final destinations.

As soon as he learned of the passenger who tested positive, Capon said, he tried contacting Holland America, the Westerdam's owner and operator, to find out if he and his fiancee need to submit to additional testing. But so far, he said, there has been little additional information available.

“Holland America is not responding to our phone calls,” Capon said. “We called the Westerdam emergency crisis line four times and have spoken to four different reps who have 'escalated' our requests for contact with a supervisor. We have also emailed multiple times to no avail.”

No Mexican or American health agency has gotten in touch either.

“Since we have returned, we are holing up in our apartment for fear we may have been in contact with someone on the ship with corona,” Capon said.

As they watch the Westerdam situation unfold from afar, the couple has started to wonder about the facts surrounding the single positive case attributed to the ship they were so recently aboard.

“How is it possible that this person shared a cabin with her husband for two weeks, yet he is not sick?” Capon said. “She was presumably in public places during the two-week voyage, but not a single one of the 2,000-plus passengers or crew were also infected? None of it makes sense to us.”