The U.S. military is preparing to face a new enemy in the Asia-Pacific region: the burgeoning coronavirus epidemic 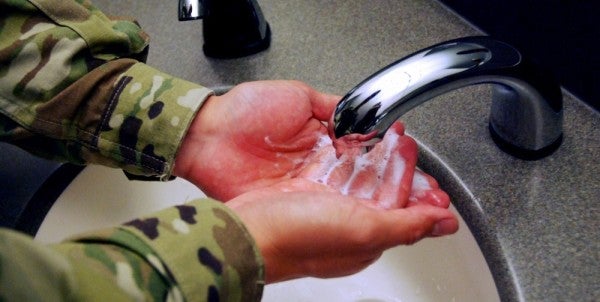 The U.S. military is preparing to face a new enemy in the Asia-Pacific region: the burgeoning coronavirus epidemic.

“Gen. Abrams and Gen. Park are looking at scaling back the command post training due to concerns about the coronavirus,” Defense Secretary Mark Esper told reporters on Monday.

So far, neither commander has decided whether to make any changes to the training schedule, said South Korean Defense Minister Kyeong-doo Jeong said at a Pentagon news briefing.

A USFK spokesman declined to comment on the possibility that combined training between U.S. and South Korean troops could be curtailed.

“Any decision regarding combined training will be an U.S.-ROK [Republic of Korea] alliance decision,” said Army Col. Lee Peters, who did not say when the command post training is scheduled to take place.

USFK recently raised the risk level for all service members on the Korean peninsula to “high” after the widow of a retired soldier tested positive for the coronavirus.

The command is advising personnel to avoid shaking hands and unnecessary contact with others, avoid non-essential gatherings, and to avoid going to work or school if they feel sick and seek medical attention immediately, Peters said.

Meanwhile, the Japan-based 7th Fleet has begun screening all personnel for the coronavirus before the can have access to ships and aircraft, said fleet spokesman LT Joe Keiley.

Stars and Stripes reporter Caitlin Doornbos first reported on the screening measures for all crew, visitors, civilians, contractors, which began on Monday.

“These additional screening requirements will include newly gained personnel and those returning from leave,” Keiley told Task & Purpose. “At this time, there are no indications that any U.S. 7th Fleet personnel have been affected by Coronavirus Disease 2019.”

So far, 7th Fleet has not had to cancel any port calls as a result of the coronavirus, he said.

Soldiers and their families assigned to Japan can attend a town hall on Wednesday to discuss health and housing concerns, said Maj. Elias Chelala, a spokesman for U.S. Army Japan.

No U.S. Army Japan personnel have been diagnosed with the coronavirus, Chelala told Task & Purpose.

“U.S. Army Japan is following travel restrictions implemented by INDOPACOM [U.S. Indo-Pacific Command] which states that all DoD travel to the People’s Republic of China (including Hong Kong and Macau) is restricted,” Chelala said. “This travel restriction applies to all military, civilian employees and contractors.”