“We’ve approached it similarly to how we operate in combat.” 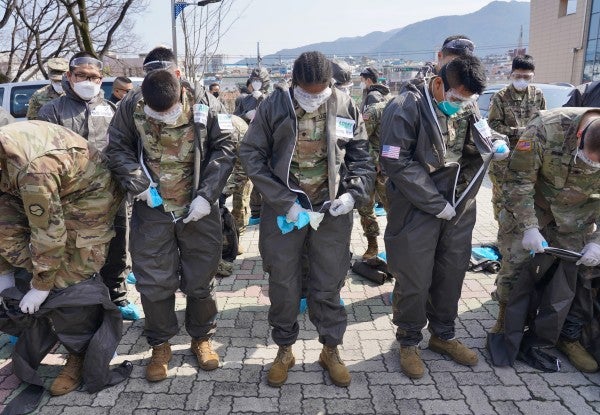 While the U.S. scrambles to get a handle on the spreading COVID-19, one military command has been leading the way on fighting the virus: U.S. Forces Korea.

Troops with USFK have been dealing with the outbreak since January as South Korea became a major hot zone for the coronavirus. Yet USFK has kept its infected numbers low, despite thousands upon thousands of cases spreading throughout the country.

Gen. Robert Abrams, the four-star commander of USFK, told reporters on Friday that only nine people affiliated with the command — and, of them, only one service member— have tested positive for COVID-19. All nine live off-base.

“Out of a population of 58,000 people that touches U.S. Forces Korea daily, that’s a pretty low number,” Abrams said.

USFK has succeeded, Abrams said, mostly due to the swift action leadership took as soon as the virus began picking up speed in China. That action included a partnership with the Korean government, which Abrams praised for being transparent and professional in working with the U.S. military.

One of the keys to success that Abrams mentioned has been treating USFK's efforts to combat the virus as a military operation.

“This is not an administrative task, this is not a medical task, and it’s not a routine event,” he said on Friday. “It’s an operation. We are conducting 24/7, around-the-clock operations, and have been since [January 27] … We’ve approached it similarly to how we operate in combat.”

That operation was kicked into high gear the moment it was confirmed that a 23-year-old male soldier in Korea had tested positive for the virus.

Immediately, travel off-post was limited to official business only; visitor access to the installations was made official business only; and off-post activities like dining out, going to movie theaters, going to bars or clubs, and large social gatherings were made off-limits, Abrams explained. At USFK HQ, personnel saw more space between seats, an increased use in video conferences and overflow rooms, and frequent cleaning of equipment like chairs, podiums, and microphones.

Transparency and timeliness? From the military? It seems almost too good to be true.

To get an idea of how Army leaders in Korea tackled this at a specific installation, Task & Purpose spoke with Maj. Gen. Patrick Donahoe, deputy commanding general of Eighth Army, based at Camp Humphreys just two hours from the city of Daegu, where the outbreak is “at its worst,” Donahoe said.

One of the first things Donahoe said leaders did was push the message that it was up to each individual to make changes, to help protect the installation, and limit interaction with people who may have traveled into a COVID-19 hot-spot. That included getting the message out to not only service members and their families, but the Korean civilians working on the installation.

The message was simple: Don’t unnecessarily expose yourself. If you need to do grocery shopping, try to do it on the installation, and then go straight home. If you’re going to work, go directly home afterwards.

Donahoe told Task & Purpose that at Camp Humphreys, officials stressed how important it was to stay home if you weren't feeling well, saying the “priority of protecting the force … completely outweighs” not coming into work.

At first, when the numbers started rising in Daegu, there was an understandable sense of panic. But Donahoe said that the Eighth Army community quickly came together and focused on fighting the virus, and that everyone — from leadership, to the military families, and beyond — has “risen to the challenge” in doing their part.

When asked what commanders in the U.S. should be wary of, Donahoe said not to procrastinate — start acting immediately.

“Don't think this isn't going to be a problem,” he said. “Do things out of an abundance of caution. … We have got to be absolutely transparent with the population.”

“If you're a commander somewhere in the U.S.,” he said. “You've got to lean into this.”