"Regardless of perspective, one thing is clear: it has the power to inflame feelings of racial division. We cannot have that division among us." 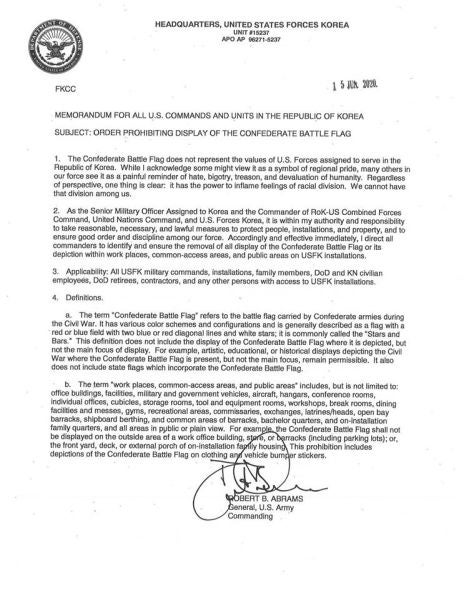 The head of U.S. Forces Korea, Army Gen. Robert Abrams, has banned the Confederate flag on all USFK installations.

In a memo released on Sunday night (Monday morning in Korea), Abrams said that the “Confederate Battle Flag does not represent the values of U.S. Forces assigned to serve in the Republic of Korea.”

“While I acknowledge some might view it as a symbol of regional pride, many others in our force see it as a painful reminder of hate, bigotry, treason, and devaluation of humanity,” Abrams wrote in the June 15 memo.

“Regardless of perspective, one thing is clear: it has the power to inflame feelings of racial division. We cannot have that division among us.”

Abrams directed commanders to identify and remove all displays of the flag.

The move comes amid a reckoning in the military — and the Army, specifically — over racism, and the display of the Confederate flag. While the Marine Corps and Navy have announced that they will no longer allow the display of the flag, the Army is still considering it.

And calls for the service to rename 10 installations which were named after Confederate leaders has become a more contentious issue; while Army Secretary Ryan McCarthy was open to the idea, President Donald Trump quickly shut it down.

“The United States of America trained and deployed our HEROES on these Hallowed Grounds, and won two World Wars,” Trump tweeted last week. “Therefore, my Administration will not even consider the renaming of these Magnificent and Fabled Military Installations.”