Just in case you were wondering 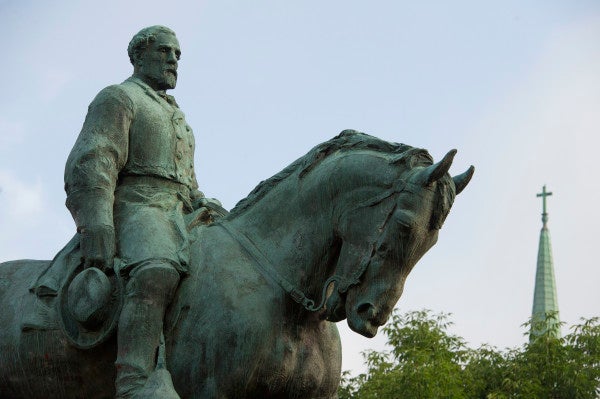 In the wake of news that the Marine Corps is banning Confederate paraphernalia from its installations, the Army says it does not plan to rename its bases and facilities that were long ago named after Confederate leaders.

“We have no plans to rename any street or installation, including those named for Confederate generals,” an Army spokesperson told Task & Purpose

“It is important to note that the naming of installations and streets was done in a spirit of reconciliation, not to demonstrate support for any particular cause or ideology,” the spokesperson added. “The Army has a tradition of naming installations and streets after historical figures of military significance, including former Union and Confederate general officers.”

The Confederate history of several Army installations was brought back into the news following the publication of a new order from Marine Commandant Gen. David Berger which directed any and all Confederate-related paraphernalia be removed from Corps installations.

As military historian Army Maj. Mark Herbert wrote in 2017, the first wave of new installations named after Confederate leaders emerged after the U.S. entered World War I. Those bases were originally named after “war heroes or prominent figures in American history,” Herbert wrote, but in several instances the naming decisions “were left up to local commanders.”

Here's a run-down on who these installations were named after:

To name a military installation after Gen. Braxton Bragg is a particularly interesting choice considering how much everyone apparently hated him.

According to Ohio State University, Bragg often quarreled with his subordinates, so much so  that he missed an opportunity to move on weakening Union forces in Chattanooga, giving Gen. Ulysses Grant a chance to launch an attack which “unexpectedly broke Bragg's line” and eventually cost Bragg his command.

A New York Times article from 2013 written by Terry L. Jones — a history professor at the University of Louisiana Monroe who wrote six books on the Civil War — said Bragg was court-martialed “for being disrespectful to his superiors,” and his long tenure as a general was “plagued by internal bickering, missed opportunities, and controversial decisions.”

“None of General Bragg’s soldiers ever loved him,” one private wrote in his memoirs, according to Jones. “He was looked upon as a merciless tyrant.”

Lt. Gen. John Brown Gordon was a slave owner who rose quickly through the ranks during the Civil War, entering the Confederate army as a captain and serving under Gen. Robert E. Lee. He was wounded five times at the battle of Antietam in 1862, including being shot in the face.

After the war, he was elected to the Senate and then became Georgia’s governor. He may also have been a member of the Ku Klux Klan, according to the National Governors Association.

Fort Benning was named after Brig. Gen. Henry Benning, a Georgia native who, according to the New Georgia Encyclopedia — a state encyclopedia maintained by Georgia Humanities alongside the Office of the Governor, University of Georgia Press and the University System of Georgia  — was a “vocal advocate for secession” that “strongly defended slavery.”

After the war, NGE says, Benning returned to financial ruin as “his wealth had been invested in slaves and land, but the slaves were now gone and much of his land was ruined.”

Maj. General George E. Pickett is best known for leading the disastrous charge on the third day of the Battle of Gettysburg, a turning point of the Civil War. The following year, Pickett ordered that 22 Union prisoners be hanged because they had previously served in the Confederate army.

He was later defeated at the Battle of Five Forks in April 1865, shortly before Robert E. Lee surrendered. Pickett had been known as a hero from the Mexican-American War, during which he planted the American flag at the Mexican castle of Chapultepec during the climactic battle.

Fort A.P Hill is named after Lt. Gen. A.P Hill, who was killed in April 1865 shortly before the Civil War ended. Hill is best known for contracting gonorrhea as a West Point cadet, a disease which left him in pain for the rest of his life.

Hill’s role in the Battle of Gettysburg remains a contentious issue. On July 1, 1863, Hill gave one of his commanders permission to advance on Gettysburg. The ensuing engagement with Union troops led to both sides being sucked into the battle. After the Civil War, some historians blamed Hill for stumbling into the battle.

The general who least needs an introduction, Gen. Robert E. Lee, is the namesake for Fort Lee in Virginia.

According to the New York Times, Lee’s stance on slavery isn’t a clear-cut issue for historians. One Civil War historian, Eric Finer, told the Times that Lee was not “a pro-slavery ideologue,” but that what’s “equally important is that, unlike some white southerners, he never spoke out against slavery.”

But, the Times reports, even Lee didn’t think the U.S. should memorialize the Civil War, believing it would be in the nation’s interest “not to keep open the sores of war but to follow the examples of those nations who endeavored to obliterate the marks of civil strife.”

Arlington National Cemetery now sits on land previously owned by Lee's father-in-law, which was left to Lee's wife upon her father's death. The couple abandoned the land at the start of the war, and it was seized by the U.S. Army.

Fort Polk is named after Lt. Gen. Leonidas Polk, another West Point graduate, though he resigned his commission to go into the Episcopal priesthood. He then went on to buy a sugarcane plantation and “worked it with several hundred slaves owned by his wife,” according to the University Press of Kansas.

When the Civil War started, Polk got in touch with former West Point pal Jefferson Davis, who made him a major general in the Confederate army. Polk “wasn’t a very good general,” according to the Ohio State University’s History Department, and Bragg “wanted him sacked for his actions” during the battle of Chickamauga in 1863.

Camp Beauregard is named after Gen. Pierre Gustave Toutant-Beauregard, who ordered the bombardment on Fort Sumter that started the Civil War.

Beauregard distinguished himself at the First Battle of Bull Run but didn't get along well with Confederate President Jefferson Davis, who relieved him of command in June 1862 for taking sick leave without permission. Beauregard went on to lead defenses of the South Carolina and Georgia coast when the Confederate submarine H.L. Hunley made its first and only attack on a Union ship before sinking. Later that year, he stopped the Union advance on Richmond by halting a much larger force at Petersburg.

After the war, he advocated for full integration, voting rights, and civil rights for African-Americans in New Orleans.

For many of these generals, there is at least the connection that they were from the states which the military installations are situated in. No such argument exists for Gen. John Bell Hood, which Texas’ Fort Hood is named after. Hood was from Kentucky, which is, in fact, not Texas.

Hood graduated from West Point and then “served on the Texas frontier,” according to the Kentucky Historical Society’s website. He left the U.S. Army to join the Confederate army when the war started and “quickly moved up the ranks.”

Rucker was wounded several times during the Civil War, ultimately losing his left arm. He was captured in Tennessee in December 1864 and later released under a prisoner exchange. The base was named after him in 1942.