How Did The US Military Get All Those Confederate-Named Bases, Anyway?

There’s been a lot of anxiety and emotion surrounding the Confederate monuments issue, especially now after the events in Charlottesville,... 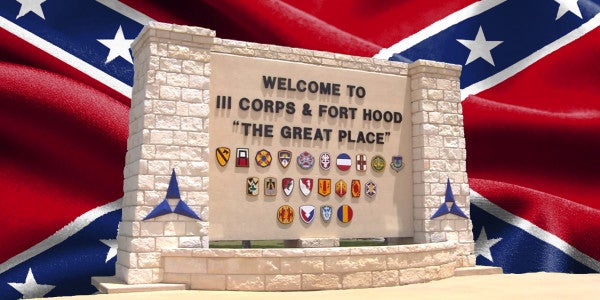 There’s been a lot of anxiety and emotion surrounding the Confederate monuments issue, especially now after the events in Charlottesville, Virginia. City mayors have begun to take steps to remove the controversial statues. But statues in cities aren’t the only tangible monuments to these sometimes-revered, sometimes-reviled rebels. We know that U.S. Army installations across the Southern United States are named for Confederate generals; the question no one seems to answer is why.

Originally, U.S. forts or posts were named primarily for war heroes or prominent figures in American history, as determined by the War Department and the headquarters of the Army. But on many occasions, naming decisions were left up to local commanders; as a result, most installations prior to World War I were named innocuously for whoever the Army district C.O. or neighborhood leaders wanted.

The current crop of 10 installations with Confederate names grew out of the Army’s expansion during the world wars.

The first wave: World War I and II

As the Army looked to grow exponentially after America’s entry into World War I, the War Department sought out land to build new training posts. Installations to train hundreds of thousands of new recruits sprang up all across the country. And the Army — with input from local communities, depending upon location — named each post. (Sidenote: My great grandfather worked as a carpenter and helped build Camp Grant, named after Gen. Ulysses S. Grant, outside Rockford, Illinois, in 1917 before he was drafted.)

Installations in the South tended to be named after local rebel heroes — either by the community that still took their Confederate heritage seriously, or by the Army, which believed that Confederate history was a part of its own. The Army still believes that on some level, given how they require current Army National Guard units in Southern states to display Confederate battle streamers.

Brig. Gen. Edmund Rucker was saved from Union captivity by his friend, Gen. Nathan Bedford Forrest. After the war, they went into business together, and Forrest went on to run the Ku Klux Klan.Photoillustration

Not all of the South’s new posts were named after Southern generals, however. In Georgia, for an example, Camp Benning, named after Confederate Gen. Henry Benning in 1918, was erected the same time as Camp Hancock, named for American Union Gen. Winfield Scott Hancock. (Hancock has since closed, but Fort Benning lives on.)

After World War I, most of these camps closed, but a few — including Camp Bragg in North Carolina and Georgia’s Camp Gordon — were selected to become permanent posts. The names became permanent, too.

With America’s entrance into World War II looming on the horizon, the War Department again began to expand the Army, and with it more training posts. Some old camps were reinvigorated and new ones built, like Camp Hood, Texas, in 1942. The naming conventions had remained more or less the same between the wars, so local communities in consultation with the Army got to help name those installations growing up around them.

After the war, the Army formalized how it named posts, forts, and installations through a board called the Army Memorialization Board. Governed by Army regulations, this board was charged with ensuring all Army post names met at least one of five criteria. Someone who was so honored would need to be:

The Army, evidently, concluded each C.S.A. name met at least one of these criteria.

Today, as monuments to Confederate leaders and generals come down, the question is: Will the Army do the same with these 10 installations and rename them? The issue has been raised before, with then-Brig. Gen. Malcolm Frost, the Army’s chief spokesman saying in 2015 that the names were a part of American history and represent national reconciliation.

Recent events in Charlottesville may change the Department of the Army’s thinking. Responses to the violence from military senior leaders, including the Chief of Staff of the Army Gen. Mark Milley, have been unanimous in denouncing hatred and racism as against the military’s values.

Ultimately, the Army does have the power to change these bases’ names. Whether they have the motivation to is another matter. Flipping the script on some of the biggest, best-known military installations in the world will take time and money. It also will undoubtedly cause friction inside the Army and beyond. Only a concerted effort on the part of those who wish to see Confederate base names go away will actually make it happen.

Major Mark Herbert is an Army officer, strategist, and military historian. Any personal thoughts or opinions are his alone and do not represent the Department of the Army, Department of Defense, or the U.S. government.