I have to preface the following harangue with the fact that I’m a few weeks behind the material I’ll be... 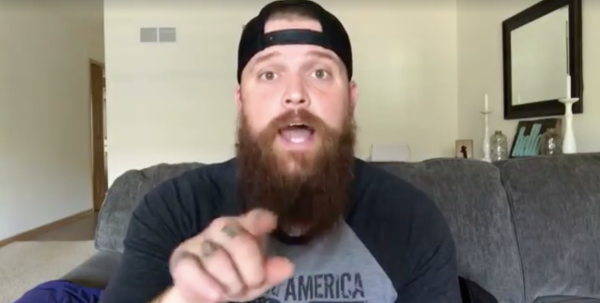 I have to preface the following harangue with the fact that I’m a few weeks behind the material I’ll be commenting on. That’s okay, though, considering my subject’s incoherent rant is late by about a decade.

Allow me to introduce a would-be internet sage, Adam Calhoun. Calhoun has made a name for himself by boldly doing what so many before him already have: growing a beard, getting covered in tats, wearing military-inspired t-shirts, and unintelligibly yelling at people watching his videos with poorly constructed and spite-filled rhetoric.

One of Calhoun’s more recent videos stems from a decade-old photograph taken by Ed Freeman, an image that parodies the famous Iwo Jima photo, only with four men raising the Pride Flag, the insignia of the LGBTQ community. Why Calhoun decided to create a stink about this so belatedly is beyond me, but his tardiness certainly didn’t stop him from proselytizing about the atrociousness of Freeman’s gall in imitating the original picture. Launching into his tirade, Calhoun conveniently forgets to mention the hundreds of other parodies of the famous picture — images of everything from soldiers raising the Confederate flag to a version that stars the cast of the My Little Pony animated series. Go ahead and google “Iwo Jima flag parody” and you’ll see example after example of artistic interpretations of the original photo.

As with his other videos, Calhoun proceeds to hone in on a seemingly insignificant concept — the raising of the Pride Flag — and blow it out of proportion to the point of viscerally rambling on about vague platitudes that describe how messed up modern America is.

In honor of the inherent democracy of the internet, which has enabled a clown like Calhoun to broadcast no-nothing diatribes to the masses, please allow me a short rejoinder. I’ll produce just a few of his incoherent sound bites, then provide my own retort in a bid to highlight just how facile his approach truly is.

“All I know is this: that was World War II, the battle of Iwo Jima, where almost 7,000 Americans died and 19,000 were wounded. I’m pretty sure that day had nothing to do with being gay or straight. It had everything to do with having courage, honor, the shit that most people don’t have anymore.”

You’re right, Adam, the battle of Iwo Jima — which lasted over a month, not one day — had nothing to do with sexual orientation. But you’re grossly incorrect in your assessment that it had anything to do with courage and honor. In reality, its prime objective was to capture key Japanese airfields so that Allied forces would have a valuable staging area to launch an attack against the Japanese mainland. Moreover, on a very unfortunate but real side note, there were very few actual advantages to holding the island once it was captured; the hard-fought battle came at great cost with little reward. Also, your last statement about most modern people not having courage or honor is quite possibly one of the most inane, blanketed accusations I’ve ever heard. I can introduce you to hundreds of military veterans whom I personally know who still exemplify those concepts — veterans of a military force that you, yourself, never joined. NEXT!

“We live in a world now where it’s cool to hate your country, it’s in style for guys to dress like girls, ISIS is treated better than our own veterans, and for some people the American flag symbolizes racism and oppression—not freedom.”

Oh boy, that’s a lot of nonsense that I could spend hours addressing, but for the reader’s sake let me focus on one particularly idiotic point, your assertion that “ISIS is treated better than our own veterans.” That’s a pretty bold statement, considering the Department of Veterans Affairs’ budget is slated to reach $186.5 billion in 2018. Meanwhile, the budget of the Department of Defense — which is pouring considerable efforts into annihilating ISIS — is more than $500 billion. And that’s not to mention the countless private charitable organizations dedicated to taking care of American veterans, organizations you can’t benefit from because you never served, though your Grunt Style shirt implies otherwise. But yeah, Adam, Americans just love ISIS. Supporting jihad has totally been the rage in post-9/11 America. NEXT!

“Instead of ruining iconic American photos and monuments, why don’t you make your own shit that signifies honor, courage, and sacrifice? Something that people can look up to.”

I believe the gay community did make something that signifies honor, courage and sacrifice, something that people can and do look up to: It’s called the Pride Flag, a banner that Army veteran Gilbert Baker designed in the 1970s. Unlike Calhoun, not only did Baker honorably serve his country, he also dedicated himself to a historically peaceful movement — one filled with thousands of other gay military veterans — that flew courageously in the face of years of discrimination. No, Adam, what the gay community has endured is not the same as what you’re going through as a bearded angry guy with a penchant for banal internet outbursts. NEXT!

“Quit burning flags, laying in the middle of the road protesting, and turning into terrorists against your own country.”

Dude, I’ve literally never heard of any members of mainstream LGBTQ organizations ever doing any of those things in the name of equality. Like, I’m pretty sure I’m having a mild stroke after hearing you imply that gay people are terrorists. Seriously, the left side of my body is beginning to go into paralysis and — ah shit w9sdvu2otnpngj0vjaiwiwiiwnCALL911……

Honestly, this level of insanity wouldn’t bother me so much if it wasn’t for the fact that Calhoun is pulling in some pretty decent views during his brave quest to be the lord regent of the lowest common denominator. The war didn’t kill me, but this guy and his loyal horde of online strawmen might be able do it.

The last thing the United States Marine Corps (of which I’m a veteran), World War II veterans of the Pacific Theater (where my grandfather lost his life), and the gay community (filled with thousands of men and women who are military veterans, unlike Calhoun) need is a white knight riding in on his e-horse to speak for them and their sacrifices to score points on the internet through thinly veiled homophobic outbursts. His content isn’t about patriotism or preserving masculinity — it’s simply a way to cling to an America that only exists in his mind.

Art often parodies and imitates other art. A reinterpretation of the Iwo Jima image depicting gay men raising the Pride Flag is not offensive. If you do find it insulting, I challenge you to track down and expend the same amount of effort commenting on the hundreds of other Iwo Jima parodies.

Now, in a bid to wrap this up and (at least temporarily) wash my hands of this unintelligible goon, I’m going to respond to one more of Calhoun’s quotes.

“My name is Adam Calhoun and I’m a regular American. I just love my country and I don’t want to see it all go down the shitter.”

My name is Jack Mandaville and I don’t have an absolute definition of what being a regular American is. I understand that being an American is a concept filled with nuance, a large part of what makes Americans great. I just love my country and I understand that it’s not going down the shitter because, in the years since that iconic Iwo Jima photo was taken, civil rights in this country have increased exponentially for ALL Americans — not just dad-bod bearded dudes who sport military-inspired t-shirts and incessantly borrow valor.