NFL To Players: Stand For The National Anthem Or Get Off The Football Field

All professional football players must stand for the national anthem ahead of National Football League games to “show respect” for... 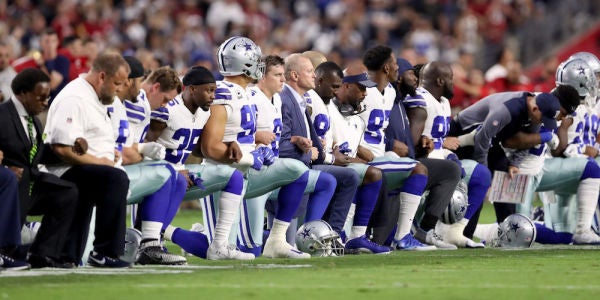 All professional football players must stand for the national anthem ahead of National Football League games to “show respect” for the American flag, NFL commissioner Roger Goodell announced on Wednesday.

Players and other NFL personnel who would prefer to remain seated or kneel during the anthem as part of ongoing protests against racial inequality and police brutality spearheaded by San Francisco 49ers quarterback Colin Kaepernick in 2016 “may stay in the locker room or in a similar location off the field,” until the anthem's conclusion, the NFL said.

“The 23 members of the [NFL] have affirmed their strong commitment to work alongside our players to strengthen our communities and advance social justice,” Goodell said in a statement. “The unique platform that we have created is unprecedented in its scope, and will provide extraordinary resources in support of programs to promote positive social change in our communities.”

It's several months since President Donald Trump put the NFL kneeling controversy in the national spotlight by pivoting from threatening North Korea to threatening pro athletes, so here's some of our essential items on the matter in case you need a refresher.

Do you have thoughts on NFL's new policy change? Let us know in the comments.