Throughout the history of the National Football League, there have been athletes who both play football and served their country.... 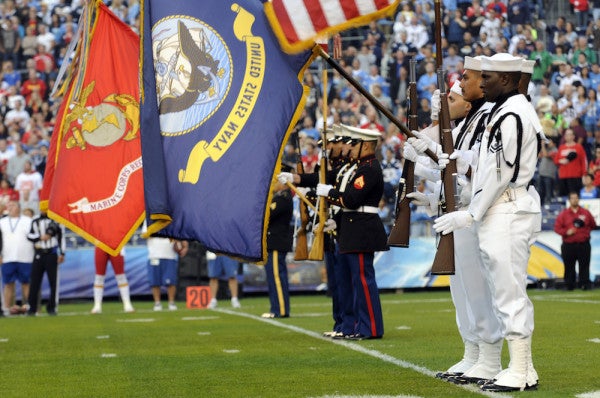 Throughout the history of the National Football League, there have been athletes who both play football and served their country. In fact, some of these World War II and Vietnam veterans were even named to the Pro Football Hall of Fame. The current generation of Iraq and Afghanistan service member-athletes are no exception.

In honor of Super Bowl 50 on Feb. 7, here are seven NFL players who served in Iraq and Afghanistan.

In this Dec. 20, 1998, file photo, Arizona Cardinals safety Pat Tillman celebrates after tackling New Orleans Saints running back Lamar Smith for a loss in the third quarter of an NFL football game in Tempe, Ariz.AP Photo by Roy Dabner

In 1998, Tillman was drafted to the Arizona Cardinals after playing linebacker at Arizona State University. Out of loyalty to the Cardinals, he turned down a $9 million offer from the St. Louis Rams. But in May 2002, Tillman gave up a multi-million dollar contract to enlist in the Army after 9/11. He was assigned to the 2nd Ranger Battalion and deployed to Afghanistan. On April 22, 2004, he was reported to have been killed by enemy combatants, but an investigation later revealed it to have been friendly fire. After his death, the Pat Tillman Foundation was established, which helps veterans and their spouses through academic scholarships.

A 2015 rookie with the New England Patriots, Joe Cardona is the only current NFL member who serves. He attended the U.S. Naval Academy, starting as a long snapper there all four years. He was a fifth-round draft pick for the Patriots, and became the fourth player ever drafted specifically as a long snapper. During the season, he works one day a week at the Naval Academy Preparatory School. When his season ended in January 2016, he set off for Norfolk, Virginia, to train before reporting to his station in Bath, Maine, with the USS Zumwalt.

Boyer enlisted in March 2005 and served as a Green Beret. After a number of tours, he switched from active duty to the reserves, and enrolled at the University of Texas. He walked on to the football team and became the starting long snapper. Boyer went undrafted, but spent the 2015 preseason with the Seattle Seahawks. Though they had to release him for the regular season and he is currently a free agent, he has found other pursuits to fill his time in the form of his “Conquering Kili” project.

Hall enlisted in the Marine Corps in 1998, serving as a field radio operator. During a tour in Afghanistan, he earned the rank of sergeant. After leaving the military in 2002, he walked onto the University of Texas football team, where he played for three years as a fullback. The Tennessee TItans signed him as a free agent in 2006. In his rookie season, Hall played in 14 games. He would fill the role of lead blocker in the Titans backfield for six seasons.

Jeremy Staat greets a veteran inside the Base Exchange March 1, 2012 at Nellis Air Force Base, Nev.Air Force photo by Senior Airman Brett Clashman

Staat attended Arizona State University alongside Pat Tillman, where he played as a defensive end. He was drafted in 1998 to the Pittsburgh Steelers and started 11 games in 1999. He then joined the Seahawks, but was cut in 2001 and began contemplating joining Tillman in the military. Tillman, however, talked Staat into staying with the NFL long enough to garner a pension with the St. Louis Rams in 2003. He left football shortly after, and in 2006, joined the Marine Corps and served with the 1st Battalion, 3rd Marines for seven months in Iraq.

Alejandro Villanueva was offensive captain for the Army Black Knights as a senior while playing Wide Receiver.U.S. Military Academy photo

Villanueva originally played for West Point as a wide receiver, offensive lineman, and defensive end. He went undrafted through 2010, but had an unsuccessful tryout with the Cincinnati Bengals. In the meantime, Villanueva spent four years as an active member of the Army Rangers, serving three tours in Afghanistan. He reached the rank of captain and received a Bronze Star award. After a brief stint with the Philadelphia Eagles, he was signed to the Pittsburgh Steelers practice team. After the team’s starting tackle was injured, Villanueva started 10 games in 2015.

In this Aug. 14, 2015, file photo, St. Louis Rams wide receiver Daniel Rodriguez runs the ball against the Oakland Raiders during the second half of an NFL preseason football game in Oakland, Calif. AP Photo by Tony Avelar

Former Army Sgt. Rodriguez served tours in both Iraq and Afghanistan. While serving, he earned a Bronze Star and a Purple Heart during the Battle of Kamdesh in Afghanistan, which left him wounded with bullet fragments in his shoulder and shrapnel in his legs and neck. He recovered, and after promising a fallen comrade that he would play football, Rodriguez enrolled at Clemson University in 2010 and play 37 games with them. Rodriguez earned a tryout in 2015 with the St. Louis Rams, and despite ultimately getting cut, he was thankful to coach Jeff Fischer for the opportunity, according to ESPN.