2 USMA Combat Vets. 2 Sides Of The NFL Kneeling Debate. This Is America’s Strength

How should a veteran think about the Colin Kaepernick-police brutality-national anthem-NFL-Trump-NASCAR shitshow that has transpired, first slowly over the past... 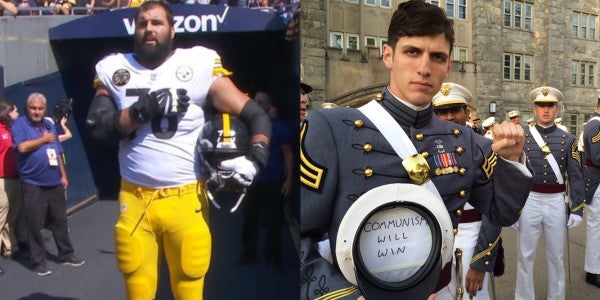 How should a veteran think about the Colin Kaepernick-police brutality-national anthem-NFL-Trump-NASCAR shitshow that has transpired, first slowly over the past few years, then really fast this past weekend, like a C-RAM farting rounds into the air over a FOB? Is there a right way to be an American, a vet, and an NFL fan? Aren’t you all just as frigging tired as I am — of being shocked, of being appalled, of being mad and disappointed and a little uncertain of where the hell this mass of humanity is careening to next?

I thought about all these questions and a truckload more as I — a brief, undistinguished vet charged with writing for a big, raucous, disagreement-laden audience of service members and their friends — puzzled over how to write a column that doesn’t make half my readers reach for pitchforks and mutter profanities at their smartphone screens. I puzzle over that a lot lately.

As a writer, I’m loath to admit that most words, most of the time, can only do so much to bring people together. We’re all getting so used to describing different realities, dear reader, that I fear we won’t recognize each other’s speech at all soon, even though we’re all ostensibly speaking the same language.

But on some level, images can impact us in a way that words can’t. They can reach out of their frames, grab us by the short hairs, and thrash us enough to maybe come to terms with a few of our shared realities. Here are two images that shook me this weekend, in a good way.

One image, on its face, seems ready-made to be a conservative meme for God, country, President Trump, and shutting the hell up about your sad feelings.

The Steelers remained inside, but LT and army vet Alejandro Villanueva stood alone outside of the tunnel. pic.twitter.com/vMyElAajCp

The other looks, at a surface glance, like a clear — and to many, terrifying — clarion call to rouse America’s leftist enemies… and the call is coming from inside the house.

Before you form your conclusions about how to feel after seeing these images, take a minute to think about what they have in common. One of those concepts we all learn as kids in school is that of the “greatest common factor”: Given two numbers, can you quickly figure out what whole number factors they have in common, and what’s the biggest among those shared factors? It’s an exercise I run back to often. I wish more people did.

The common factor here is obvious: Army. Not just Army, but West Point. The man pictured at the top, Alejandro Villanueva, offensive tackle for the Pittsburgh Steelers, graduated from the U.S. Military Academy in 2010, became an Army Ranger, and deployed three times to Afghanistan before taking a journeyman’s route to his NFL starting job. He has a Combat Infantryman Badge and a Bronze Star with “V”.

The rest of Villanueva’s teammates agreed collectively to stay off the field during the national anthem of their game Sunday in Chicago, out of respect for those in the league who have knelt to protest police violence against minorities. Villanueva chose to stand outside, hand over his heart, for the song. He’s been critical of quarterback Colin Kaepernick, who started the kneeling trend (with constructive criticism and support from Green Beret and NFL vet Nate Boyer), and his teammates didn’t expect him to break ranks with them. Many aren’t pleased about it, but they see where he’s coming from. “We support our guy Al,” Steelers defensive end Cam Heyward said after the game. “He feels he had to do it. This guy served our country, and we thank him for it.”

Imagine that: Feeling very strongly about the right thing to do, but accepting a teammate who feels differently, because the team — Steelers, Army, America, any, all — is the thing. Villanueva understands that, too. While he personally thinks he has no choice but to stand for the anthem under any circumstance, he’s still down to make America a more perfect union when the music stops. “I will be the first one to hold hands with Colin Kaepernick and do something about the way minorities are being treated in the United States, the injustice that is happening with police brutality, the justice system, inequalities in pay,” he has said. Imagine that.

Now look at the man in the picture below him, holding his West Point dress cover to reveal a short but jarring statement: “Communism will win.” Spenser Rapone graduated from West Point in 2016 and is currently in infantry training. But he’s not new to the Army or to enemy fire, as evidenced by his Combat Infantryman Badge, GWOT service medal, and Afghanistan campaign medal. He tweeted the photograph in solidarity with Kaepernick, other NFL kneelers, and left-leaning veterans, whose point is that there’s something weirdly off about the idea that you’re required to stand and hum the national anthem (most of us don’t know the words, after all) because vets fought and died to make America free. Do free speech on our own time? they say. That’s not how fighting for justice works.

Rapone’s no mere troll. He’s a real socialist, who believes American society should be radically reconceived to make citizens more equal. He’s written passionately about “white supremacist iconography” and “profoundly racist culture” at West Point, which he shares as an alma mater with most of the Confederate army’s officer ranks. But it is his alma mater nonetheless. While he renounces private property ownership as the United States practices it, he owns a little piece of the Great Chain and the Point, and its history is now a part of him. He didn’t destroy USMA; he joined it, and seeks to change America from within. As much as he can, as a serving Army infantry officer, anyway. “Symbolic victories are important,” he writes. For all the radical flair, you could imagine him agreeing with the guarded patriotism of that old classical British conservative, Edmund Burke: “To make us love our country, our country ought to be lovely.”

Remember the common denominator in these seemingly disparate images. Villanueva and Rapone are forever joined in the long gray line, in Afghanistan service, in combat experience. I bring this up not to push the tired cliche that vets, by virtue of their life experiences, deserve “casual ribbons,” free meals, or extra deference for their opinions. No, it’s about a shared love of country — and a shared responsibility to do what you think is best for that country. Neither of them acted out of resentment to others, screamed “fuck you!” or did anything to suggest they don’t take police brutality, or American patriotism, seriously. We may feel that way, looking at one or another of these images, bringing to them our own fears, suspicions, and expectations — but that’s something we’re doing to ourselves.

These are just two guys who ate the same load of service academy crap for four years; lived by an exacting honor code that keeps cadets up in cold sweats at night, hoping that offhand incorrect report to an upperclassman about the noontime menu didn’t sound like an intentional lie; deployed to Asia’s graveyard of empires because their country asked them to; and came back from war in one piece. They agreed to go to Afghanistan and fight real men with real weapons for a centuries-old idea. I am certain they both render appropriate honors to the flag when in uniform. I am pretty sure they both would avoid colors on post if they could; the rest of us definitely did.

“You got a right to burn the flag,” my military mentor in high school — a veteran of Vietnam with the Seabees — used to say. “And you better not do it around me, ’cause I will break you.” I understand the sentiment. That mentor also showed me how to duck into a base building before evening colors to avoid the five-minute salute. I understand that sentiment, too.

Marines & corpsmen vanishing from sight ahead of the 2x-daily colors ceremony, or loitering at hatches so as not to be outside, was SOP.

All of which is to say that, even in the mind of a war-wearied vet who’ll go HAM on flag-desecrators, this patriotism thing is complicated. We don’t always agree on the symbols and what they mean, because we all want to see ourselves and our best in them. It’s time we looked for each other in them.

If you want to know how to do that, all you really need to do is look hard at Lts. Villanueva and Rapone, the photographs of these two vets shuttling around the internet in the service of this or that political meme on an autumn Sunday. Look hard, not for the differences between them, but for what they hold in common. For my part, I see everything I love about being American, everything I loved about taking an oath to serve my country. I see the potential for us to agree on the Big Important Stuff — namely, that there’s still something worth fighting for, and improving, in America — while tussling over our symbols of Americanness and how to achieve our country.

For once in a loud, tumultuous, and at times scary American era, I see something that makes me hopeful we can still be whole in some meaningful way, even when we’re disagreeing vehemently about how we make our meanings. Maybe I’m wrong; empathy is hard, among the hardest frontier journeys humans can still attempt. But I never knew an America that shied away from hard work.