In 1898, on a sweltering summer day in mid August, Army Pvt. James Neely of the all-black 25th Infantry Regiment... 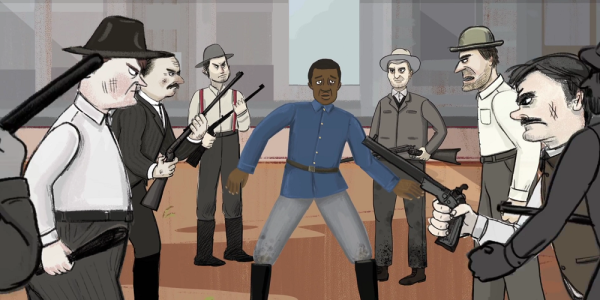 In 1898, on a sweltering summer day in mid August, Army Pvt. James Neely of the all-black 25th Infantry Regiment was on leave in the small town of Hampton, Georgia, on a day pass from his post at Fort Hobson.

Neely had just returned home from Cuba where he and his regiment had served in the Spanish-American War with distinction. Like any soldier back in the states after serving abroad, he was was proudly wearing his uniform when he stepped into a local drugstore to escape the heat.

But this was the Jim Crow-era South, and the white drugstore owner told Neely he had to go around back. An argument broke out between the two men, and Neely was thrown out of the store. The altercation drew an armed and angry crowd that chased Neely down the road and shot him he was still wearing his uniform. He died of his wounds that day.

Neely’s murder is the subject of an animated short film produced by the Equal Justice Initiative and former Storycorps animator and director Julie Zammarchi.

Visually, the animation places a strong emphasis on bold and blunt emotional content. The narrative and its tragic outcome drives the story forward and keeps your focus to the end, which sees Neely’s name set against a backdrop of countless others who suffered the same fate for speaking out against Jim-Crow era laws.

The Equal Justice Initiative, an Alabama-based civil rights advocacy group, detailed Neely’s murder in a comprehensive report on the lynching of black veterans. The most recent report is the follow-up to a larger investigation by EJI, that was published in 2015  and documented more than 4,000 lynchings of African-Americans between 1877 and 1950.

The video is narrated by actor Chris Chalk, who appears in “The Newsroom,” “Homeland,” Law & Order,” and the film “12 Years A Slave.”

Watch the animation below.