A 38-second video that appears to show a vehicle-borne IED chasing down a pair of Humvees in a desert somewhere... 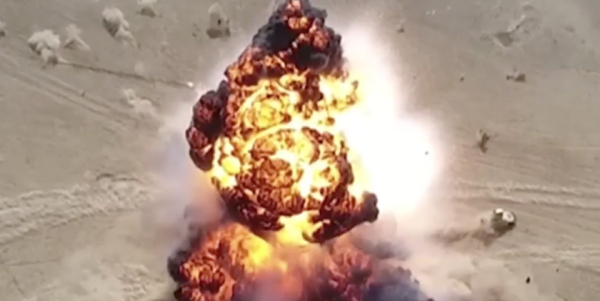 A 38-second video that appears to show a vehicle-borne IED chasing down a pair of Humvees in a desert somewhere — presumably, the Middle East — is making rounds on social media.

The footage, which is watermarked with the ISIS black flag, appears to have been recorded by a surveillance drone. According to Laith Alkhouri, an NBC News counterterrorism analyst, the video was officially released today by ISIS’s media arm. What the footage captures, however, is open to interpretation.

One could safely assume that this is a video of an ISIS militant executing one of the jihadist group’s favorite battlefield tactics: roving car bombs.

But the explosion is spectacular enough to warrant suspicion. “I notice we don’t see the aftermath,” Stars & Stripes reporter and Marine vet Chad Garland tweeted after watching the slickly produced video. “I’m just doubtful given the video doesn’t cut to it,” he added.

Are there some serious Adobe After Effects at work here? You be the judge.