Kurdish Sniper Nearly Gets Shot In Face By ISIS, Laughs, And It’s On Video

A video of a Kurdish YPJ (Women’s Protection Unit) sniper almost getting shot in the face while fighting in the... 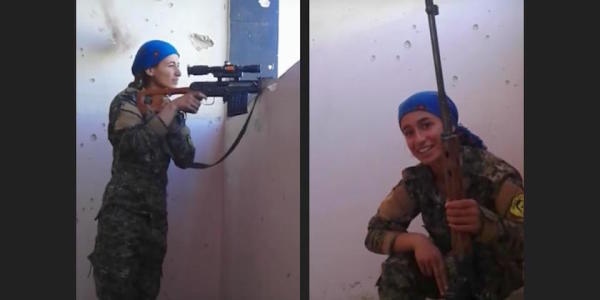 A video of a Kurdish YPJ (Women’s Protection Unit) sniper almost getting shot in the face while fighting in the ISIS stronghold of Raqqa is going viral and not because it’s like two centimeters away from being featured in Faces of Death Vol. 2, but because of her reaction, which is basically: “Oh, hey, so this funny thing just happened.”

This is probably not the first time this young woman has nearly been shot in the head.

The YPJ is the all-female wing of the Kurdish YPG (People’s Protection Unit), a guerrilla army based in northern Syria that has been fighting ISIS since the terrorist group’s formation, while also occasionally duking it out with Turkey. The group is backed by the U.S.-led coalition and is currently taking part in the bloody campaign to wrest Raqqa from ISIS control.

In the video, the YPJ sniper takes aim at a target — human, presumably — and pulls the trigger. Less than a second later, a round cracks into the wall right over her head, appearing to have come from right outside her sector of fire. And that’s when we see that million watt smile. According to BBC, the sniper then tells whoever is filming her to stop, saying: “Enough, enough filming.”

Of course, people are already calling the legitimacy of the video into question, and rightfully so. The battlefields of Iraq and Syria have yielded no shortage of doctored footage. Propaganda from both sides has played a big role in this war. But Maximilian Uriarte, better known as Terminal Lance, whipped up a quick illustrated diagram to show how this totally could have happened:

Keyboard warriors calling the sniper video fake, here is a very easy diagram of how this could have went down. pic.twitter.com/d1Pr52NXDu

Seems legit. Now we just need to find out who this sniper is so we can send her a camouflage headscarf. Or maybe a helmet.