VICE has obtained helmet cam footage recovered from an ISIS fighter after an intense battle with Kurdish forces in northern... 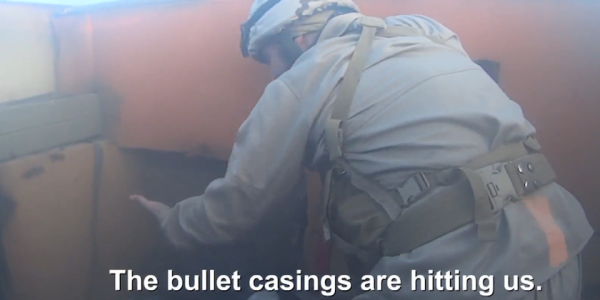 VICE has obtained helmet cam footage recovered from an ISIS fighter after an intense battle with Kurdish forces in northern Iraq, 30 miles outside of Mosul. The video, which offers a visceral, first-person view of heavy combat, ends with the man who filmed it being shot and, according to VICE, killed.

As VICE rightly points out, the ISIS propaganda wing, comprised of a growing collective of sympathetic media outlets, is prudent in how it represents the group’s battlefield prowess on the internet. Official videos, of which there are hundreds — maybe thousands — typically, if not always, depict ISIS in a state of triumph.

That said, one could reasonably assume that this particular video, which was purportedly filmed in March 2016 and begins with a series of farewells to an ISIS suicide bomber, was not intended for public consumption.

What begins as an ISIS-initiated assault on Peshmerga forces quickly devolves into a turkey shoot, with the jihadists being pinned down in a DIY up-armored vehicle, taking blow after blow until they’re forced to make a desperate retreat. There’s no glory on this side of the fight. Only gruesome defeat.

In April, the Pentagon pledged $415 million to the Kurds to aid their fight against the Islamic State, which has been bolstered by American ground troops and airstrikes since the terrorist group swept through northern Iraq in the summer of 2014. The military campaign to retake Mosul, the Islamic State’s de facto headquarters outside Syria, is widely expected to start before the year’s end.

Watch the footage below.