This Norwegian Mercenary Is Instagramming His Fight Against ISIS

A millennial soldier of fortune who goes by the name ‘Mike’ is waging an independently funded war against the Islamic... 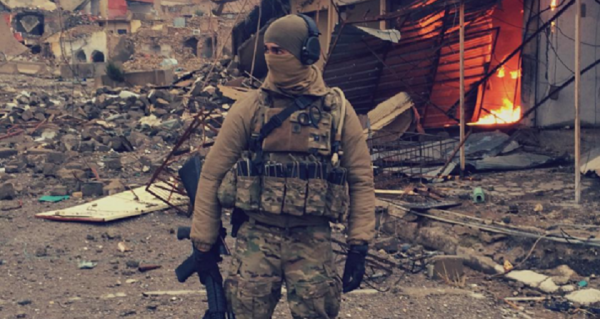 A photo of "Mike," a Norwegian war veteran who is fighting ISIS and goes by the handle Peshmerganor on Instagram.
SHARE

A millennial soldier of fortune who goes by the name ‘Mike’ is waging an independently funded war against the Islamic State.

While his real identity remains anonymous, the Norwegian fighter came to Norway as an Iraqi Kurdish refugee at a young age in the 1980s and after serving with Norwegian forces in Afghanistan, he decided to return home to his native Iraq, according to the Daily Caller.

“When we’ve run Islamic State out of Mosul, it will mark the death of Islamic terrorists in Iraq,” he told Dagbladet, a Norwegian news site, reports the Daily Caller. The city of Mosul in northern Iraq is currently under siege by anti-ISIS forces, as they try to route the militant group.

Fighting alongside the Peshmerga as a volunteer, the Afghanistan war veteran uses social media sites like Liveleak and Instagram to help raise money through his website to pay for equipment, travel, and living costs as he fights independently against the extremist group.

Mike is part of a growing number of military veterans who have travelled to Iraq and Syria to join the fight against ISIS.

The implications of an actual war being waged simultaneously online are far reaching. It is troubling to think that combat, and really, life and death, are now spectator sports for anyone with a smartphone and good cell reception. One Instagram page even claims to allow viewers to vote on whether or not captured ISIS fighters should be executed.

More than anything else, social media has come to define the ongoing war against the Islamic State. The terror group has used it to recruit foreign fighters, sow fear and misinformation, and spread its ideology.

As the war against ISIS spreads from battlefields in Iraq and Syria, to a host of social media platforms, from Instagram, Twitter, to YouTube and Facebook, it’s no surprise that opponents of the extremist group have taken their fight online as well.