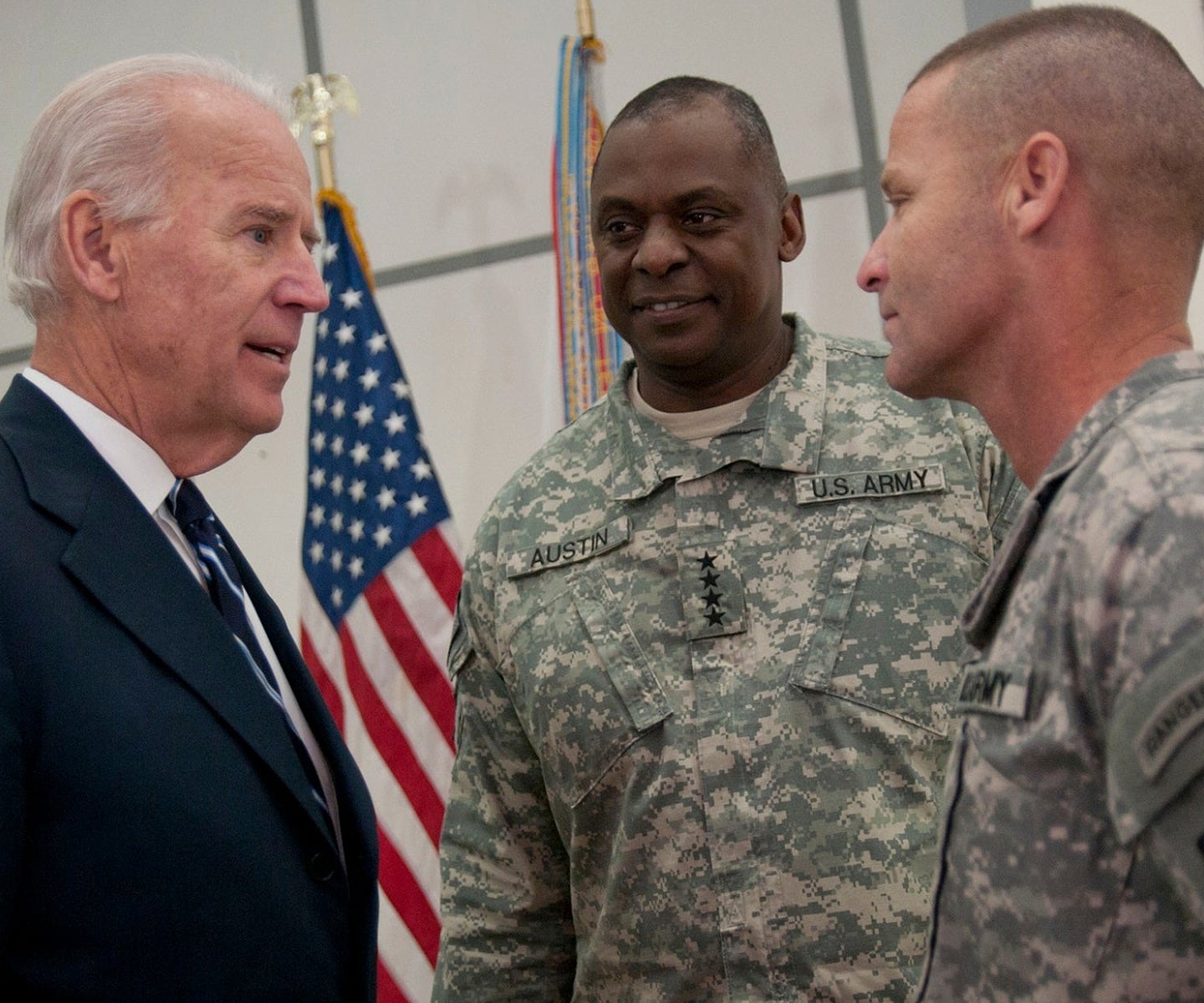 Vice President Joe Biden talks with United States Forces Iraq commander, Gen. Lloyd J. Austin III, and Command Sgt. Maj. Earl Rice of the 18th Airborne Corps, after unveiling the Medal of Commitment. Dec. 1, 2011, marks Iraq's Day of Commitment. The ceremony hosted by the Iraqi government at Al Faw Palace, in Baghdad, Iraq would be the last of it's kind as U.S. forces continue to draw out of Iraq. U.S. Vice President Joe Biden, took the opportunity to thank U.S. and Iraqi service members for all of their sacrifices that led to the end of an almost decade long war.
SHARE

If confirmed by the Senate, Austin would be the first Black man to serve as defense secretary. He would also require a waiver from Congress to take the job because he has been retired for less than seven years.

Task & Purpose has confirmed that Austin will be Biden’s nominee to serve as defense secretary. Politico was first to report on Monday that Biden had selected the retired general to run the Pentagon.

Austin served as the assistant division commander of the 3rd Infantry Division during the invasion of Iraq and was awarded the Silver Star for his role during the battle for Baghdad in April 2003.

“Brigadier General Austin’s heroic leadership and dedicated devotion to duty, without regard for his own life, were in keeping with the highest traditions of military service and reflect great credit upon himself, the 3d Infantry Division, and the United States Army,” according to his award citation, which is posted on the Military Times Hall of Valor.

Rep. Anthony Brown (D-Md.) has tweeted that Austin would be a “historic and significant” nominee as defense secretary.

“Lloyd Austin is top flight and he’s the right choice to lead our civilian & military personnel at the Pentagon,” tweeted Brown, who is vice chair of the House Armed Services Committee.

Austin served as the commander of Multi-National Corps Iraq, which oversaw day-to-day operations there, from Feb. 2008 until April 2009. He then led all U.S. forces in Iraq when President Barack Obama failed to reach an agreement with the Iraqi government to keep troops in the country past the end of 2011.

During his tenure at CENTCOM, ISIS overran much of northern Iraq in the summer of 2014, prompting the U.S. military to first launch airstrikes and then send troops to the region again.

As part of efforts to defeat ISIS, the U.S. government spent more than $500 million as part of a plan to train more than 5,000 moderate Syrian fighters, but the program was a total failure. In Sept. 2015, Austin was forced to acknowledge at a contentious Senate hearing that only four or five Syrian fighters had actually graduated from the train and equip effort.

A visibly angry Sen. John McCain (R-Ariz.), who was chair of the Senate Armed Services Committee at the time, called Austin’s comments about Syria “divorced from reality.”

“Basically, general, what you’re telling us is that everything is fine as we see hundreds of thousands of refugees leave and flood Europe; as we’re seeing now 250,000 Syrians slaughtered; as you see more and more Iranian control of the Shia militia that are the only ones really doing the fighting besides the Peshmerga.”

Also during Austin’s tenure, the Pentagon looked into whether CENTCOM’s senior leadership pressured intelligence analysts to give overly optimistic assessments of the fight against ISIS, as National Public Radio reported in September 2015.

“It became pretty clear if they wrote something bad, it was likely to be changed,” an unnamed military source told NPR at the time. “Knowing that bad news on ISIS wasn’t welcome meant that, over time, the picture of the fight began being rosier.”

Ultimately, the investigation determined that senior leaders at CENTCOM did not distort intelligence reports about the Islamic State group, according to the New York Times.

Rep. Adam Smith (D-Wash.), chair of the House Armed Services Committee, has been notified of Austin’s pending nomination, but he has not yet had a conversation yet with Biden’s team about the process of granting Austin a waiver, a senior House aide told Task & Purpose.

The fact that Biden has picked Austin to serve as defense secretary has prompted some civil-military experts to voice their concerns because Congress would have to issue a second waiver within four years for a retired general to lead the Pentagon. Former Defense Secretary James Mattis also required a waiver when he was nominated in 2017 because he had been retired for less than seven years.

At the time, Sen. Jack Reed (D-R.I.), reportedly said that such waivers should only be issued “once in a generation” and he would not support similar moves for future nominees, according to the Washington Post.

Jim Golby, an adviser to Biden, recently wrote a commentary in the New York Times arguing that neither Austin nor any other retired generals should serve as defense secretary.

Both Mattis and retired Army Gen. George Marshall, who was granted a waiver to serve as defense secretary in 1950, proved to be too close to general and flag officers while leading the Pentagon, Golby wrote. Marshall in particular, who is revered for his time as secretary of state, initially sided with Army Gen. Douglas MacArthur, who was openly insubordinate to President Harry Truman.

After a turbulent four years, the Pentagon needs to get back to normality, wrote Golby, a senior fellow at the Clements Center for National Security at University of Texas, Austin.

“But appointing another retired general to lead the Pentagon will not help return things to normal,” Golby wrote. “Even if a retired general like Mr. Mattis was the right person for the Trump era, that era is over. A legislative exception granted at an exceptional moment should not become the new rule.”