In 2016, California lawmakers made it significantly more difficult for citizens to possess their very own AR-15 assault rifle. Now,... 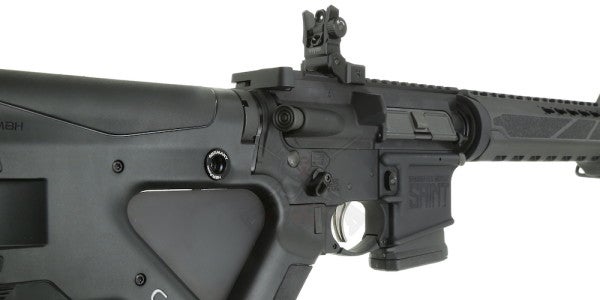 In 2016, California lawmakers made it significantly more difficult for citizens to possess their very own AR-15 assault rifle. Now, one firearms manufacturer wants to make it easier for Second Amendment devotees to flex their semi-automatic muscles.

SB 880, which went into effect on Jan. 1, 2017, mandates unregistered AR-15s come equipped with a fixed magazine system that forces owners to effectively take apart their rifle to remove and replace — a supposed curb on detachable magazines in response to the deadly San Bernardino mass shooting in December 2015.

In response, weapons maker Springfield Armory announced last week that the company’s signature AR platform, the Saint, will go featureless, offering California residents a chance to own what’s effectively a fully functional AR-15 while avoiding the new registration requirements established by the state.

The company has developed custom Saint AR platforms for California gun enthusiasts in the past, but the new line is a big deal. Instead of resorting to modifying existing AR models with innovative upgrades like the Mean Arms MA Loader, California consumers now have a manufacturer on their side when it comes to dealing with the new law.

“I think it’s also important for our customers to know that we are developing a California compliant version of our Saint rifle,” Springfield sales and marketing chief Jeremy Rosenberg told Guns.com. “We are working with a couple of other partners and some other manufacturers to put together a very, very nice rifle that will still be California compliant as well.”

The original Saint, Springfield’s first attempt at building a better AR-15, was unveiled in early November 2016 and currently retails for around $899. The company showed off the California-compliant version of the rifle at January’s SHOT Show in Las Vegas, Nevada:

It’s unclear how much the featureless version of the platform will cost; the Stag Arms featureless AR, announced at the end of 2016, starts at just over $1,000. But California residents are likely hoping it’ll be cheaper — or at least less hassle — than shelling out a few hundred bucks to modify their existing arsenal.