A new bill, the Hearing Protection Act, introduced on Capitol Hill last week could make purchasing a suppressor as easy... 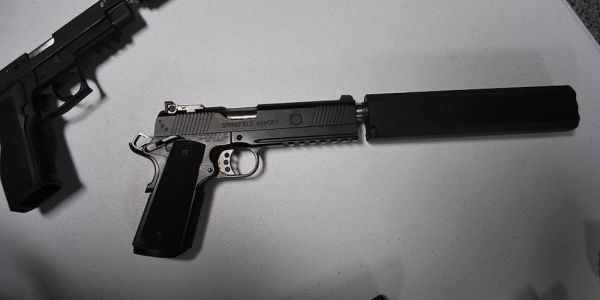 A new bill, the Hearing Protection Act, introduced on Capitol Hill last week could make purchasing a suppressor as easy as buying a rifle, depending on the state you live in, at least.

The Hearing Protection Act of 2017, introduced in the House of Representatives on Jan. 9 by Republican representatives Jeff Duncan of South Carolina and John Carter of Texas, would remove suppressors from the National Firearms Act, replacing the required paperwork approvals and background check — which often takes months to complete — with the instantaneous National Instant Criminal Background Check run by the FBI. The bill also does away with the $200 tax stamp.

“Suppressors do not make guns silent or dangerous,” Carter said in a statement. “They are simply a form of hearing protection, both for the shooter and their hunting dogs.”

Not everyone is on board with making suppressors easier to buy. “There’s no evidence of a public health issue associated with hearing loss from gunfire,” a spokesperson for the Brady Campaign to Reduce Gun Violence told the Los Angeles Times. The Times also states that silencers could make mass shootings even more dangerous, as first responders would have a difficult time locating the source of gunshots.

If the bill passes the House, the next step is to pass the Senate. With Republican majorities in both houses, the bill has a better chance of succeeding than it did in 2015, when it died in Congress. Then it’s off to the president’s desk — and with Donald Trump Jr. telling suppressor manufacturer SilencerCo the Trumps are “big fans of suppressors”, it’s probably got a pretty good chance of passing.

Guns are damn loud, as anyone who has fired a rifle can tell you. M16s, M4 carbines, and AR-15s are particularly noisy, especially when many shots are fired in a short period of time. An M4 carbine or M249 squad automatic weapon is between 159 to 164 decibels. Up close, the noise is downright painful, and exposure over an extended period of time can cause long-term hearing loss.

Hiram Percy Maxim, whose father invented the Maxim machine gun, invented the first commercially successful suppressor in the early 20th century. The “Maxim Silencer” worked on the same principle used in all suppressors: by slowing down the escape of hot propellant gasses leaving the barrel. It retailed for $7 and was available for over-the-counter sale.

Of course, “silencer” was a misnomer and pure marketing on Maxim’s part — rather, the sound is suppressed but still very much there. If a regular rifle is a big boom, a rifle equipped with a suppressor is a smaller boom — but still a boom nonetheless. Depictions of “silencers” in television, movies, and videogames as dealers of death with just a faint clicking sound are way, way off the mark. Yeah, thank Maxim for that. A silencer made by Advanced Armament Company, a defense contractor and purveyor of suppressors to civilians can drop the M4’s loudness down to 130 decibels — about the same as a jackhammer.

The 1934 National Firearms Act heavily regulated suppressors. Today, anyone who wants a suppressor has to go through an application process that includes a $200 federal tax and a background check. Furthermore, in many states including California, Illinois, Massachusetts, New Jersey, and New York, suppressors are illegal, period — and likely still would be even if the Hearing Protection Aact becomes law.

The U.S. Marine Corps agrees. The Marines are equipping an entire battalion’s worth of infantrymen with suppressors, from M4s to M2 heavy machine guns, and claim that running suppressors makes it easier for troops to communicate with one another in a firefight. While squads might be spread out over the equivalent of a football field, it’s difficult for a sergeant giving orders to make himself heard over the din of combat. “It increases (the infantry’s) ability to command and control, to coordinate with each other,” the 2nd Marine Division’s infantry weapons officer told Military.com.

Civilians with suppressors on their AR-15s report they’re actually comfortable to shoot without ear pro. Ear pro reduces your situational awareness, which is not such a great thing when handling dangerous firearms. Finally, as communities grow and spread out, housing is built near established shooting ranges resulting in noise complaints. Requiring suppressors at rifle range would reduce complaints while making range officers easier to hear.

Nobody likes excessive gun noise — wearing ear pro is something that shooters have just learned to live with to get through training or enjoy their sport. But if the Hearing Protection Act is signed into law, suppressors in many states could become as common as guns themselves. 2017 might be remembered as the year that America’s guns got a little quieter, but not too quiet.