At the beginning of July, Republicans lawmakers introduced the cleverly acronymed Silencers Help Us Save Hearing (SHUSH) Actto both the... 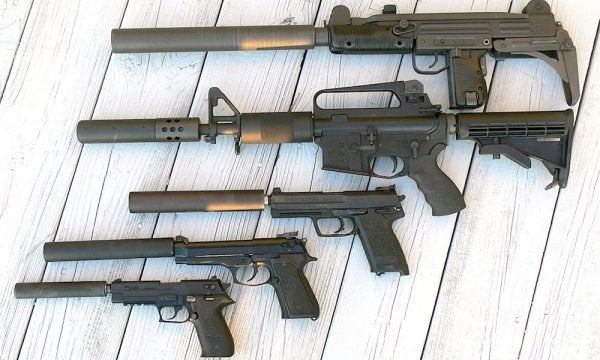 At the beginning of July, Republicans lawmakers introduced the cleverly acronymed Silencers Help Us Save Hearing (SHUSH) Actto both the House and Senate. Backed by Sens. Mike Lee of Utah and Mike Crapo of Idaho and Congressman Steve King from Iowa, the legislation has a simple objective: to ensure that suppressors are “treated the same as firearms accessories.”

SHUSH aims to remove suppressors from the National Firearms Act, a goal also shared by the Hearing Protection Act, whose campaign to remove the devices from government regulation Task & Purpose has reported on previously. The legislation also seeks to reclassify suppressors as firearms accessories, like scopes or stock furniture, rather than a Title II item under federal law. This would allow suppressors to be sold over the counter in a manner similar to other advanced countries.

In a joint statement issued on June 29, Senators Lee and Crapo asserted that more access to suppressors “can make shooting safer for the millions of hunters and sportsmen that exercise their constitutional right to use firearms every year,” arguing that the current system is too expensive and complicated. The senators believe that “by properly classifying suppressors as a firearm accessory, our bill would allow sportsmen to have better access to hearing protection.”

Of course, gun control groups such as the Everytown for Gun Safety Support Fund quickly condemned the SHUSH Act,arguing that “silencers pose a significant danger in the wrong hands” and that the legislation would end up equipping “convicted felons, domestic abusers, and the dangerously mentally ill.” It should be noted, of course, that those persons would actually need to purchase a firearm to use a suppressor and would end up subject to the standard federal background checks (And course, if they acquired a firearm illegally, they could also just as easily acquire a suppressor by the same means)

You might expect that the American Suppressor Association, a key suppressor lobbying group, might support any new legislation that might free suppressors from the NFA. ASA president Knox Williams signaled to Task & Purpose that the group would continue to focus on the Hearing Protection Act rather than back new legislation. While the HPA essentially seeks to treat suppressors as firearms, requiring only a standard background check, SHUSH seeks to go further, a push Williams fears could imperil any potential legislative victory.

“When we developed the language for HPA in 2015, we did so with the intention of giving the bill the best possible chance of passing,” Williams told Task & Purpose.” We've worked for years to get the HPA to where it is now, building co-sponsorship, and working towards moving the bill through the legislative process.”

In a perfect world, where no compromise is needed, the SHUSH Act would be great,” he added.” However, we don't live in a perfect world. As such, we will continue to focus our efforts on the Hearing Protection Act.”

For those expecting the firearms advocacy groups to throw their weight behind SHUSH may end up disappointed. Back in June, ASA announced that some of the key components of the HPA had been included in a larger piece of legislation known as the Sportsmen’s Heritage and Recreational Enhancement (SHARE) Act. Under Title XVII of SHARE, some of the HPA’s important measures to legalize general ownership of suppressors will get a fair hearing by various lawmakers.

SHARE is currently progressing through the subcommittee stage, and SHUSH has been referred to committees in both the Senate and House for further discussion. Task & Purpose continue to bring you the latest with both the HPA and SHUSH.