It will soon be legal for non-National Firearms Act, short-barreled firearms with pistol grips to be sold in Texas, which,... 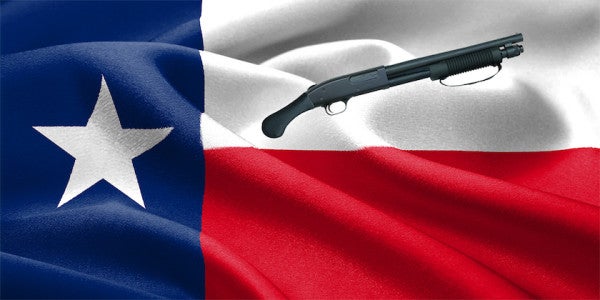 It will soon be legal for non-National Firearms Act, short-barreled firearms with pistol grips to be sold in Texas, which, according to theNational Rifle Association, was one of only two states where the sale of such guns was prohibited.

Thanks to a modification to Texas’ firearms laws,HB 1819, firearms such as the Mossberg 590 Shockwave and the Remington Tac-14 will be legal to transfer in the state beginning Sept. 1. The bill, signed into law by Texas Governor Greg Abbott in late May, also tweaked the state’s suppressor regulations.

The Shockwave, which is manufactured at a Mossberg facility in Eagle Pass, Texas, and debuted at SHOT show earlier this year, is one of several guns recently unveiled that circumvent a provision in theNational Firearms Act requiring a tax stamp (and lots of other personal information, money, and red tape) for shotguns that are shorter than 26 inches and/or have a barrel less than 16 inches in length.

By mounting 14-inch barrels on shotgun-based systems just over 26 inches in length, Mossberg and other manufacturers are producing pistol-grip “firearms” in 12 gauge that function like short-barreled shotguns. But because the weapon’s receiver started with a pistol grip and not a shoulder stock, it was “born a ‘firearm’ and not a shotgun,” asGuns.com puts it, and it clears the NFA regulations.

However, even though federal law treats the Shockwave as a conventional firearm, certain state laws still treat it as a short-barreled shotgun and bar its possession. Hence the push for a legislative change in Texas.

HB 1819 passed the Senate 28-2 in May and was approved unanimously in the House. According toGuns.com, Mossberg played a role in helping shepherd the bill through, joined in its efforts by the NRA and Texas State Rifle Association.

“All of us at Mossberg recognize that this bill would not have passed without the efforts of many,” Joe Bartozzi, Mossberg’s executive vice president,told Guns.com.

Senate Bill 16, which reduces the state-issued license-to-carry fee in Texas to one of the lowest in the country, also goes into effect Sept. 1. “No law abiding Texan should be priced out of the ability to exercise their Second Amendment rights,” Abbott said after signing the bill on May 26.

The governor promptly celebrated the bill’s signing by hitting the gun range.