The Marine Corps is on track to graduate its first female Marine infantry officer from its notoriously intense 13-week course,... 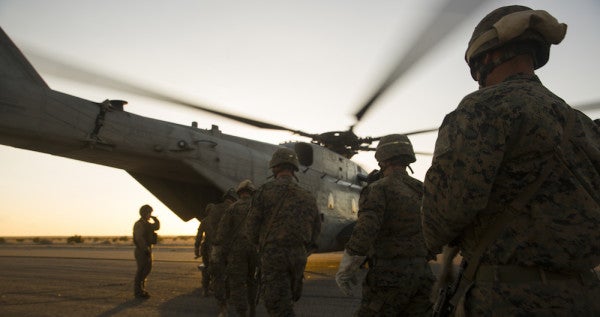 The news was first reported by the Washington Post.

The unidentified Marine lieutenant, the 31st female candidate for the branch’s grueling Infantry Officer Course, has officially completed PALMFEX, the three-week live-fire exercise conducted at Twentynine Palms in California that marks a “culminating event” for all aspiring infantry officers, alongside her male colleagues. She is expected to graduate on Sept. 25.

As of early September, the candidate overcame the obstacles that had weeded out her predecessors, including the course's six graded tactical-movement exercises that, as Task & Purpose previously reported, include brutal slogs of between 6.4 and 9.3 miles with weight loads of up to 152 pounds — significantly more intense requirements than other officer candidate schools throughout the armed forces.

As the Washington Post notes, the 86-day IOC is considered one of the most grueling training course in the Corps and among the most challenging for U.S. infantry troops, boasting a 25% washout rate.

“It’s essentially [The Basic School], but on steroids,” an active-duty Marine and recent IOC graduate who declined to be identified told Task & Purpose in early September. “It’s the varsity level for a lot of skill sets, techniques and procedures that are refined through the most mentally, physically, psychologically and emotionally challenging situations you’ll ever experience.”

This is a developing story. Check back for new updates.