Lt. Col. Jennifer Grieves, the first woman to command the presidential helicopter Marine One in 2009, has been fired from... 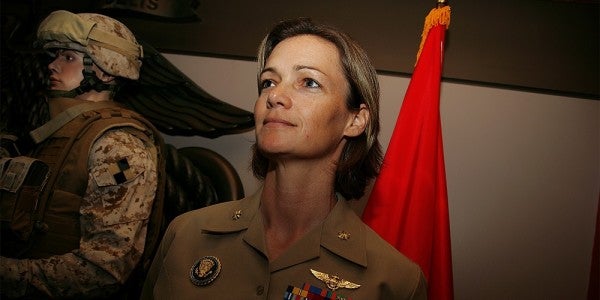 Lt. Col. Jennifer Grieves, the first woman to command the presidential helicopter Marine One in 2009, has been fired from her post as a squadron C.O. after failing to report her off-duty arrest for assault to her superiors.

Glavy removed Grieves “due to a loss of trust and confidence in her ability to continue to lead,” the statement said, after an “off-duty incident that was not properly reported.”

In December, Grieves was arrested at her home in Sneads Ferry, North Carolina, on a charge of “simple assault,” and was released on $500 bail. The arrest was related to a domestic dispute and the charge is still pending, according to an Onslow County Sheriff’s Department arrest report obtained by Military.com's Hope Hodge Seck.

In 2009, Grieves was spotlighted by ABC News’ as a “person of the week” when she finished her year-long tour as the first female officer to command Marine One.

Grieves, who enlisted in the 1990s before earning a commission in 1998, has deployed to the Horn of Africa, as well as Afghanistan, and her awards include two Air Medals-Individual Action, three Meritorious Service Medals, five Air Medals-Strike/Flight, and a Combat Action Ribbon, according to her official Marine Corps bio.She took command of HMH-464 in May 2016.

Command of the squadron has passed to Lt. Col. Troy Callahan, who previously served in Marine Operational Test and Evaluation Squadron One (VMX-1), according to II MEF’s statement.

Grieves “will be reassigned within II Marine Expeditionary Force,” the statement said.

CORRECTION: An earlier version of this article incorrectly stated Hope Hodge Seck's name. It has been corrected. (Updated 6/8/17, 7:48 pm EST).