Army Gen. Martin Dempsey may have retired in 2015, but the skeletons in his footlocker aren’t done with him just... 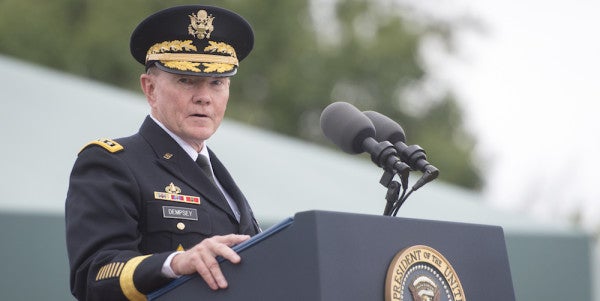 Army Gen. Martin Dempsey may have retired in 2015, but the skeletons in his footlocker aren’t done with him just yet.

Shortly before his ascension to chairman of the Joint Chiefs of Staff, Dempsey intervened to protect a high-ranking Army officer from punishment for, among other things, inappropriate sexual behavior with female subordinates, according to a March 9 report in USA Today. While Dempsey used his JCS post to decry sexual assault pervading the armed forces, his reported favoritism remained “largely a dirty secret within the military” — until now.

According to a September 2010 Army inspector general report the newspaper obtained through the Freedom of Information Act, Dempsey intervened in the case of then-Maj. Gen. John Custer, who faced demotion for lying about an “inappropriate” relationship with a woman, in which he “made his staff buy sexy clothing for her, subjected his underlings to racist and sexist emails and allowed himself to be photographed with another woman licking the medals on his formal dress uniform.” As USA Today’s investigation found, Dempsey personally prevented inspecting officers from punishing Custer for allegations the inspectors said were proven true:

At the beginning of the executive summary, the report says “SUBSTANTIATED ALLEGATION AND CONCLUSION: MG Custer engaged in an inappropriate relationship.”

The report was signed by Lt. Gen. R. Steven Whitcomb, the Army inspector general, and Gen. Peter Chiarelli, the Army's No. 2 officer.

But the substantiated allegation of the inappropriate relationship, prohibited by military law, never reached the board considering whether he should lose rank in retirement. Dempsey had it stricken from the report.

While Dempsey was vocal about officer misconduct during his time as JCS chief (he sent four-star officers a memo in 2012 in the aftermath of a chain of incidents that garnered national news coverage), his protection of Custer — who remained eligible for a $162,000-a-year O-8 retirement pension — “shows how the top brass’ public pronouncements of zero tolerance for sexual misconduct don't match the private, preferential treatment they offer to one of their own,” as USA Today put it. “The Army inspector general’s report, not released until this year and obtained by the paper through the Freedom of Information Act, showed Custer’s cavalier regard for investigators’ questions. At times, he dismissed their concerns with laughs, and, at others, offered answers about his relationship with women and denials of having sex that investigators deemed 'not credible.'”

The USA Today report comes in the wake of the “Marines United” nude photo-sharing scandal that’s rocked the Marine Corps, casting a pall of misogyny and sexism over the armed forces in the eyes of many civilians and vets. Marine Corps Commandant Gen. Robert Neller, in a recorded video message this week, delivered a harsh condemnation of the Marines involved in the MU saga, but the Dempsey report leaves us asking: When is talk just talk, and when will senior brass actually walk the walk?