Investigation: CNO Was Too Slow Firing ‘Bad Santa’ But Did Not Commit Misconduct

Chief of Naval Operations Adm. John Richardson should have moved faster to remove his spokesman, who was accused of sexually... 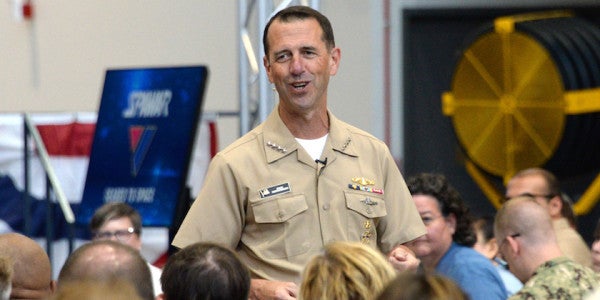 Chief of Naval Operations Adm. John Richardson should have moved faster to remove his spokesman, who was accused of sexually harassing three female sailors at a December 2016 Christmas party, the Defense Department Inspector General’s Office has found.

“We believe that Adm. Richardson’s failure to ensure that the PAO was removed from his personal staff in a sufficiently expeditious manner – for 4 months after he decided to reassign the PAO and take administrative action against him – sent the wrong message about how seriously Adm. Richardson took the allegations of sexual harassment,” according to the inspector general’s investigation, which was released on Friday.

“Adm. Richardson acknowledged that he should have acted more expeditiously. We agree,” the report added. “We concluded that the reassignment could have, and should have, been done closer in time to ADM Richardson’s decision to take administrative action to address the allegations against the PAO.”

However, inspector general’s office also cleared Richardson of misconduct, finding that the admiral did not violate any Navy or Defense Department standards by taking so long to get rid of his spokesman, according to the investigation, which was conducted at the request of Sen. Kirsten Gillibrand, D-N.Y.

In what has come to be known as the “Bad Santa” incident, Cmdr. Christopher Servello was accused of making unwanted advances toward three women around the time of the Dec. 14, 2016 Christmas party, including slapping a woman on her buttocks, giving another woman two “uncomfortably long hugs,” and calling and texting another woman several times shortly after the party – all while he was dressed as Santa Claus, the investigation says. Servello’s name was redacted from the inspector general’s report, but multiple media reports have identified him as the Santa in question.

Although Richardson decided to punish Servello administratively in April 2017, Servello was not reassigned until that August. Richardson gave investigators a long list of excuses why the process of finding Servello a new job got “dorked up,” including high turnover in his office at the time.

“I decided that we would write him an adverse FITREP , essentially ending his career as an upwardly mobile public affairs officer, and that he would have to be removed from the staff. . . . then started down the road executing those actions, and this is where it kind of got, you know, bogged down I guess is the best way to put it,” Richardson told the inspector general’s office. “And so I think that, for lack of any better way, the mechanics just got really screwed up in terms of executing the decision made in April briskly, and so that took far longer than it should have.”

Servello was initially supposed to take a job as spokesman for U.S. Naval Air Systems Command, but Richardson did not want him to be the person talking to the media about Navy pilots suffering from hypoxia, the admiral told investigators.

Eventually, Richardson realized that he had become the de facto action officer on the Servello matter and it was up to him to pull the trigger, he said. On Aug. 18, 2017, he told investigators, he said at the morning meeting: “Hey, this guy's got to be gone. It's been too long and the thing is not coming together. I still do not have a freaking relief here. We still haven't found a good place for him, but this is the end. It's done.”

On Friday, Richardson sent Task & Purpose a statement saying he appreciated the level of scrutiny with which the inspector general’s office investigated his actions.

“I learned a great deal from the experience,” Richardson said. “In particular, I should have moved more quickly to bring matters to a close and to avoid any unintended messaging to the Navy and especially to survivors. I've made changes to Navy policy so that in the future, senior leaders will benefit from these lessons.”

Navy Secretary Richard Spencer gave Richardson his full support on Friday, telling Task & Purpose: “Adm. Richardson has done an outstanding job as the Chief of Naval Operations building a stronger and more ready to fight Navy. I'm completely confident in his abilities and know that he will continue to fight every day for a more lethal force. We have reviewed and discussed his actions in this chain of events. What he has learned from this experience he will pass on to the next generation of leaders, making the Navy even stronger.”

Reached for comment on Friday, Servello said he had nothing to add to the investigation because the inspector general’s office did not interview him, but he noted that he was never charged in connection with the allegations against him.

“Hopefully, now finally that this report is done, this can finally be the end of the matter for all involved,” he told Task & Purpose.