"Due to the ongoing nature of investigations, it would be inappropriate to speculate on any charges at this time." 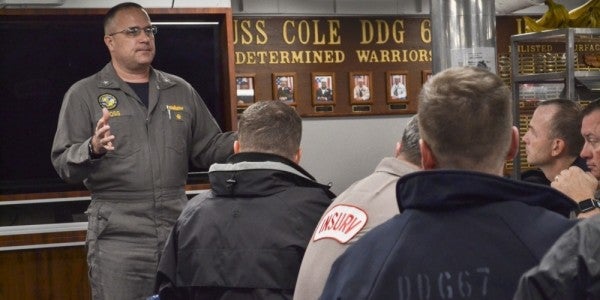 Navy Rear Adm. Erik Ross was fired as commander of Expeditionary Strike Group 2 on Friday as 2nd Fleet plans to launch an investigation into “an alleged off-duty incident calling into question his judgment,” a fleet spokeswoman said.

A 1988 graduate of Cornell University, Ross is a surface warfare officer who commanded the dock landing ship USS Whidbey Island from February 2006 to August 2007, and the amphibious assault ship USS Bataan from August 2011 to February 2013, according to his Navy biography.

His first assignment as a flag officer was serving as president of the Board of Inspection and Survey from June 2017 to May 2019. Ships are required to pass INSURV inspections to make sure they meet Navy standards.

Ross has been temporarily reassigned to 2nd Fleet pending the completion of the investigation, a fleet news release says. Capt. Darren Nelson has temporarily assumed command of Expeditionary Strike Group 2 until a permanent replacement can be found.