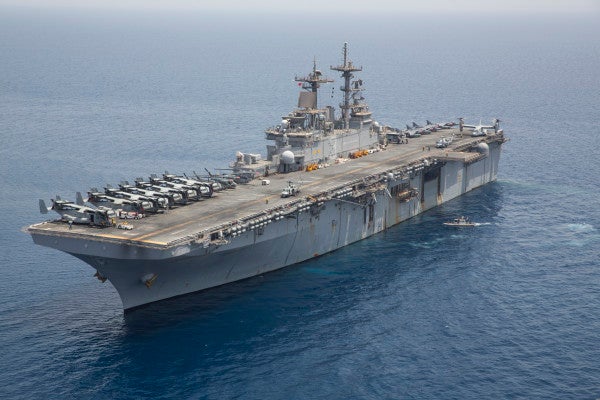 The inferno that engulfed the amphibious assault ship USS Bonhomme Richard isn't the only fire to strike a Navy capital ship in recent weeks.

“In response to this incident, the Navy has issued a stop-work order for all ships in maintenance availabilities at GD NASSCO Norfolk to ensure compliance with all established fire protocols and procedures,” Naval Sea Systems Command spokesman Rory O’Connor told Task & Purpose.

Defense News was first to report news of the fire aboard the Kearsarge.

Work on the warship resumed on Tuesday after NASSCO employees and subcontractors were required to complete fire and general safety training, an official said

“Compliance with these actions is necessary to ensure established procedures and protocols are adhered to in order to prevent any unforeseen incidents or fires,” O'Rourke said. “Navy officials verified that these actions are complete, and as such, have lifted the stop work order.”

As NASSCO personnel worked to address the Kearsarge fire, Navy and Huntington Ingalls Industries personnel responded on Monday to what a spokesman characterized as a “minor” fire aboard the aircraft carrier John F. Kennedy (CVN 79) at Newport News Shipbuilding in Newport News, Virginia,

Emergency crews quickly extinguished the fire, and the ship was evacuated while it was being ventilated due to smoke, HII spokesman Duane Bourne told Task & Purpose.

“Although the fire was put out quickly, we did experience heavy smoke and immediately evacuated the entire ship,” HII president Jennifer Boykin said in a Facebook post addressing the incident. “The damage was contained to the compartment where the fire occurred, and we are investigating the cause.”

No injuries were reported, and Newport News Shipbuilding is investigating the cause of this incident, Bourne told Task & Purpose.

“I want to thank everyone who responded this morning,” Boykin told HII personnel in her Facebook post. “Your quick thinking and prompt actions kept people safe, prevented injuries, and minimized damage to the ship. You have my commitment that we will learn from this, and we will share our lessons learned – not just at NNS – but across all Navy shipyards.”

While Navy and HII spokesman characterized the fires as “small” and “minor,” respectively, both incidents came in the immediate aftermath of the four-day fire aboard the USS Bonhomme Richard in San Diego that saw hundreds of firefighters battle temperatures of up to 1,000 degrees to bring the inferno under control.

Navy personnel finally managed to extinguish the blaze on Thursday, but Chief of Naval Operations Adm. Mike Gilday wouldn't say for sure if the decades-old warship was salvageable.

“I am 100% confident that our defense industry can put the ship back to sea,” Gilday told reporters on Friday. “Having said that, the question is, should we make that investment in a 22-year-old ship? And I'm not going to make any predictions until we take a look at all the facts and … we can make reasoned recommendations up the chain of command.”

In the wake of the Bonhomme Richard fire, the Navy is taking extra measures to ensure that other vessels avoid an inferno the engulfed the warship.

Speaking at an event hosted by the United States Navy Memorial on Monday, Assistant Secretary of the Navy for Research, Development and Acquisition James Geurts stated that the Kearsarge fire is “a constant reminder the threat is there, big and small,” according to USNI News.

“While a minor incident, we want to make sure that we’ve got all the procedures there,” Geurts said, per USNI News. “So we’re redoubling across the force.”

Indeed, a letter sent from the heads of Naval Forces Europe and Africa, U.S. Fleet Forces Command, and U.S. Pacific Fleet and published by USNI News on Monday urged ship commanders to strengthen and enhance their efforts to prevent and combat shipboard fires before they spiral out of control.

Among the measures recommended for ship commanders to immediately implement: conducting zone inspections to remove combustible material and assess avenues for emergency egress; review of damage control manning and qualifications in each duty section; conducting all-hands training on fire reporting procedures; and “assess[ing] the proficiency of each duty section to combat shipboard fires,” among others.

“The tragic events onboard USS Bonhomme Richard illustrate the catastrophic effects of a shipboard fire,” the letter reads. “We need to take this time to ensure our equipment is ready, our people are trained, and our procedures are rehearsed so that we are able to fight and win.”

Related: The Bonhomme Richard fire raises questions about whether the Navy learned anything from its last ship fire