“I feel absolutely hopeful [the ship] will sail again" 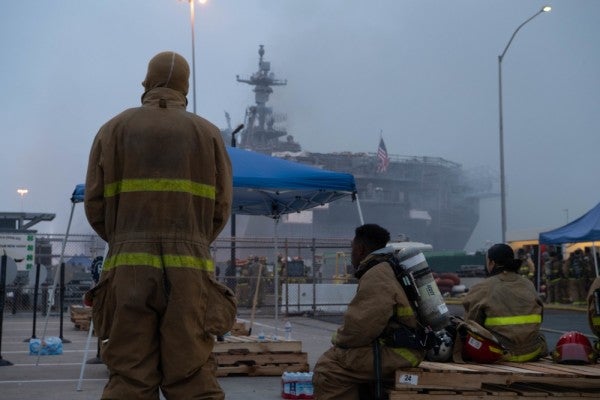 More than 400 sailors continued to do battle with the raging fire aboard the amphibious assault ship USS Bonhomme Richard docked pierside in San Diego on Monday.

The fire, which began Sunday morning, has collapsed the ship’s forward masts, damaged the ship’s superstructure and upper decks, and appears to have spread to points closer to the bow, Rear Adm. Philip Sobeck, commander of Expeditionary Strike Group 3, told reporters on Monday.

The warship is also listing on its side from all the water dumped from helicopters in an effort to quench the inferno, Sobeck explained.

Despite the damage, the admiral was confident the ship could be saved and repaired for future operations.

“I feel absolutely hopeful [the ship] will sail again,” said Sobeck, who placed his faith in the sailors fighting the fire. “Every single one of them is trained and ready.”

So far, 34 sailors and 23 civilians have been treated for minor injuries, including heat exhaustion and smoke inhalation, the Navy said.

Sobeck didn’t have an estimate as to how long it would take to extinguish the fire, and doing so will be a complex and difficult challenge.

The admiral listed a range of obstacles that firefighters must weigh at every turn: the stability of the compartment they’re fighting through; the rocking of the ship in the water; scaffolding and debris left in the way from the maintenance work being done on the ship; the temperature, which in some places has reached as high as 1,000 degrees Fahrenheit; and over-pressurization from all the hot air building up in the ship’s innards.

When asked if he knew of any similar fires in modern U.S. naval history, Sobeck referred to the 2012 fire aboard the nuclear submarine USS Miami, which caused $700 million in damage and forced the Navy to scrap the sub.

Still, the admiral cautioned that he can’t know how bad things are until the fire’s out.

“Right now the priority is to fight the fire, get it out so we can make a complete assessment,” Sobeck said.

So far, officials are unclear on how the inferno started in the first place, and Sobeck said it will be impossible to know exactly until an investigation is conducted once the blaze is extinguished

However, Sobeck said that the fire appears to have broken out in the vehicle storage area, known as the deep V storage area, which was holding large triwall boxes as the vessel was undergoing repairs.

The ship’s Halon system, which emits a gas that starves a fire of oxygen, was also inactivated because of the repairs, the San Diego Union-Tribune reported.

Sobeck also stated he was aware of the environmental concerns from the fire and he advised residents to follow public healthy agency precautions, such as keeping windows shut.

California residents up to 40 miles away from the blaze said they could smell smoke, The San Diego Union-Tribune reported. One Navy veteran said on Twitter that the smell was “familiar to anyone who’s ever been around a burn pit. For those who can, don’t go outside.”

Sobeck had said on Sunday that the fire was a Class A, nontoxic fire, but on Monday he indicated that plastics, cabling, and rags used to clean and maintain the ship were also likely consumed in the flames.

For now, Sobeck said one of the top priorities is to keep the fire away from the million or so gallons of fuel sitting two decks below the flames.

“We’re going to make sure” the fire doesn’t reach the fuel, he said.

Black smoke rose from the ship Monday morning, but by early Monday afternoon the smoke had changed to a lighter grey color.

Helicopters from Helicopter Sea Combat Squadron Three could be seen continuing to drop buckets of water on the ship.

Helos from HSC-3 continue to drop water on the forward and aft sections of the island superstructure, which has suffered extensive fire damage. #BonhommeRichard @sdut pic.twitter.com/MdQVqHc375