Several commanders, including a vice admiral, were disciplined for failing to properly prepare the crew for such a fire, which destroyed the ship. 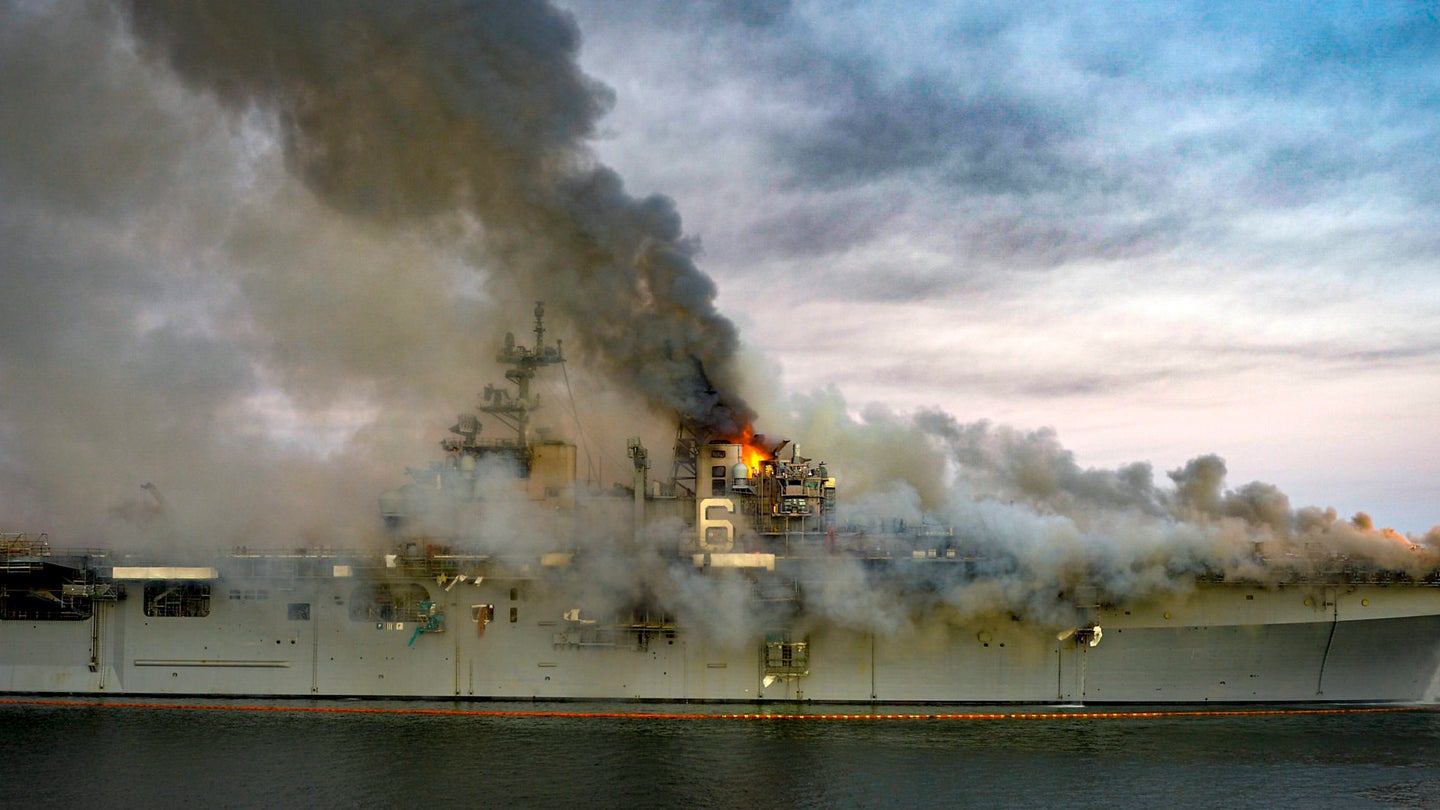 The Navy laid out a series of punishments for more than two dozen sailors, including a vice admiral, for their handling of the fire onboard the USS Bonhomme Richard in 2020. The four-day fire off the coast of San Diego left the amphibious assault ship doomed to be scrapped. The Navy announced the set of disciplinary actions on Friday, the first public move since an earlier investigation found the fire preparedness for the USS Bonhomme Richard to be substandard.

U.S. Pacific Fleet head Admiral Samuel Paparo gave out letters of reprimand and forfeited pay for Capt. Gregory Thoroman and Capt. Michael Ray, who were respectively the commanding and executive officers of the USS Bonhomme Richard at the time of the fire. The ship’s command master chief Jose Hernandez also received a letter of reprimand. Letters of instruction were sent out to base and maintenance commanders as well. The punishments were sent out for failing to take action soon after the fire started, over disputes and confusion over who had operational command over the ship while it was in port.

At the highest level of those disciplined is retired Vice Admiral Rich Brown, who at the time of the blaze was commander of Navy Surface Forces, U.S. Pacific Fleet. Secretary of the Navy Carlos Del Toro issued a letter of censure to the now-retired Brown, who told Defense News earlier this month that he had been cleared of culpability in the response to the blaze.

The four-day fire in July 2020 started with arson, but continued while commanders tried to untangle who was in charge and would coordinate firefighting operations. The ship had gone to port for upgrades to let it carry F-35B fighter planes on it. The fire caused more than $3 billion in damage and the Navy decided it was better to scrap the ship entirely rather than attempt repairs on the heavily damaged vessel.

The alleged arsonist, Seaman Apprentice Ryan Mays, was already charged prior to this announcement. His case is ongoing.

An earlier investigation into the blaze found that the ship’s crew was ill-equipped and not properly trained for such a fire at the time of the incident. 87 percent of fire stations were not maintained. Sailors took improper risks and without the right equipment in some moments, resulting in cases of smoke inhalation. The investigation also zeroed in on the confusion at the time of the fire, noting there wasn’t clarity over who was in charge and what the chain of command was in the event of a fire such as the one that hit the ship. In a June memo, Del Toro said that the fire could have been prevented with proper oversight of the fire prevention equipment and preparedness.

The punishments are some of the most sweeping the Navy has handed out in recent months, and for the clearest reasons. Since May, the Navy has been relieving multiple commanding officers from ships, in almost every case for unspecified losses of confidence in their ability to lead. Most recently on July 8 the Navy removed the commander of the USS Scranton after only eight months in command of the nuclear submarine.