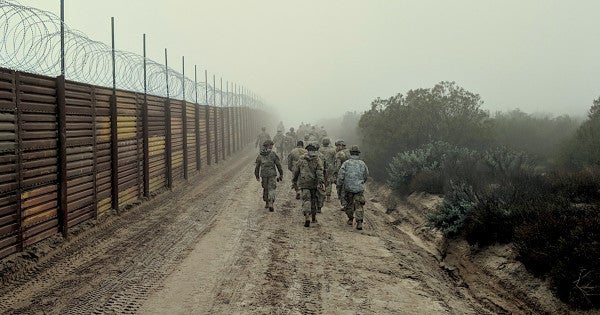 The Navy will discharge two San Diego-based sailors found guilty last month of smuggling immigrants who had illegally crossed the southern U.S. border with Mexico in exchange for cash.

Petty Officer 3rd Class Jaiale J. Alvarado, an information systems technician assigned to the USS Bonhomme Richard, pleaded guilty on June 9 to charges that he transported “aliens within the United States” for private financial gain on two separate occasions near Jacumba Springs, Calif. in Sept. 2019, according to a copy of the charge sheet provided by the Navy.

He was sentenced to 45 days confinement, demotion to seaman recruit, and a bad-conduct discharge.

On June 30, Petty Officer 3rd Class Ralph Joseph T. Carolino pleaded guilty to one charge of conspiracy and was sentenced to 45 days confinement, demotion to seaman apprentice, and a bad conduct discharge.

Carolino, a boatswain's mate assigned to Naval Base San Diego, had conspired with a person he knew as “Ryan” to pick up and transport “individuals traveling on foot” near the border town of Tecate, Calif. on two separate occasions in June and July 2019 for private financial gain, according to the charge sheet, which was also provided by the Navy.

The military in southern California has seen a number of human smuggling incidents in recent years.

In July 2019, two U.S. Marines were pulled over in Jacumba and arrested by U.S Customs and Border Protection for shuttling people from Mexico further into the United States. Two of the three immigrants found in the car with the Marines told officers they had agreed to pay $8,000, about three times more than the service members' monthly pay.

The investigation dramatically expanded weeks later, after the Marine Corps announced human trafficking and drug charges against two dozen Marines at Camp Pendleton. Many of the cases later fell apart after a video surfaced showing they were arrested and called a “cancer” by their commanding officer in front of an 800-person battalion, which a military judge ruled was an unlawful violation of their rights.

Most of the Marines were later dealt with through administrative separation, outside the military court system, according to the San Diego Union-Tribune.

In 2018, a California National Guard soldier was arrested for allegedly smuggling three Mexican nationals in exchange for at least $6,000, according to USA Today.

Border patrol agents have apprehended nearly 260,000 people who attempted to cross the southwestern border since Oct. 2019, according to statistics from Customs and Border Protection. The agency arrested more than 851,000 immigrants during the previous fiscal year.

A Navy spokesman could not immediately answer questions regarding the services' efforts to discourage human smuggling or whether there had been an increase in such incidents.