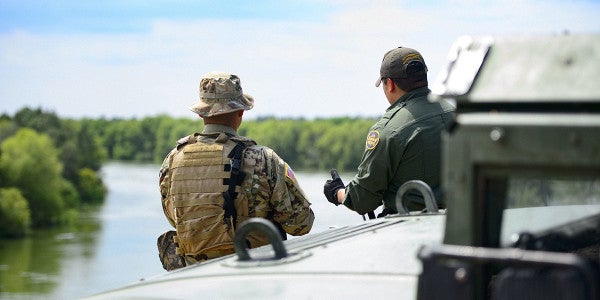 Lance Cpl. Byron Darnell Law II and Lance Cpl. David Javier Salazar-Quintero, who were both arrested on July 3, 2019 with three undocumented immigrants in the back seat of their car by U.S. Border Patrol agents, pleaded guilty on smuggling charges in recent months.

Law pleaded guilty on Jan. 14 to unlawfully transporting, for private financial gain, aliens who entered the United States illegally, and wrongful use and distribution of a controlled substance. He was sentenced to 18 months confinement, forfeiture of all pay and allowances, reduction to E-1, and a dishonorable discharge.

Both Law and Salazar-Quintero joined the Corps in 2017 and were trained as infantry riflemen. Neither have been deployed.

According to a federal criminal complaint, Law told Border Patrol agents that he was an active-duty Marine and dimed out Salazar-Quintero as the organizer of the smuggling operation. “Law stated that last night, Salazar called and asked him if he was willing to make $1000.00 USD picking up an illegal alien,” the complaint said.

On July 2, the pair of infantrymen traveled to Jacumba, California while being guided “via cell phone instructions from an unknown Mexico number,” according to Law, who said they then picked up a single immigrant and brought him to a McDonald's parking lot in Del Mar.

The next day, Law told agents Salazar called him for another job. This time, with Law in the driver's seat, they both went to the same area and picked up “three illegal aliens” off the I-8 freeway.

The three immigrants who were arrested identified Law as the driver of the car that picked them up. Two of them said they were going to pay $8,000 to be smuggled into the U.S. with destinations in Los Angeles and New Jersey.

In the aftermath of the arrest of Law and Salazar-Quintero, investigators with the Naval Criminal Investigative Service found there were others involved in the smuggling operation, with more than two dozen more Marines being punished for alleged smuggling or drug offenses.

All told, 24 Marines faced administrative or judicial action, with 22 having been discharged, according to Lt. Cameron Edinburgh, a spokesman for 1st Marine Division. (The two remaining Marines are Law and Salazar-Quintero, who will be discharged after their prison time is served).

“All cases were handled at the appropriate level and with respect to the rule of law,” Edinburgh said. “We have a duty to the American people to be the most ready when the nation is least ready, and we will continue to enforce the standards of honor, courage and commitment that serve as the great hallmarks of our Corps.”

According to Edinburgh, one Marine received a general discharge under honorable conditions, two received bad conduct discharges, and 19 received other than honorable discharges.