Motz declined to comment on what specific unit was involved (Law and Salazar-Quintero were both assigned to 1st Battalion, 5th Marine Regiment). 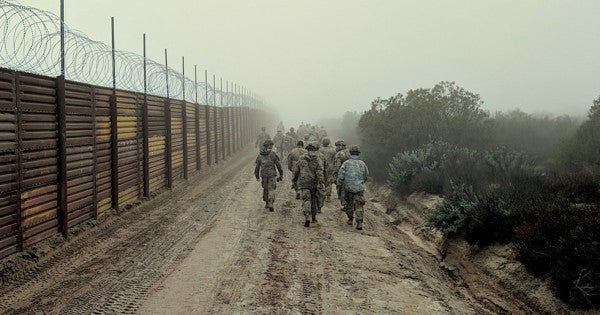 Sixteen Marines with 1st Marine Division were arrested on Thursday at a battalion formation for “alleged involvement in various illegal activities ranging from human smuggling to drug-related offenses,” the Corps said in a press release.

Another eight Marines were questioned about their involvement in alleged drug offenses, the release said, which added that “information gained from a previous human smuggling investigation precipitated the arrests.”

The arrest of the 16 can be traced back to the case of two Marine infantrymen, Lance Cpl. Byron Law and Lance Cpl. David Javier Salazar-Quintero, who were pulled over and arrested by Border Patrol on July 3 — along with three undocumented immigrants in the backseat — as they were allegedly trying to make a quick buck shuttling people from Mexico into the United States, according to a federal court complaint first reported by Quartz.

A source familiar with the matter told Task & Purpose the mass arrest of additional Marines came after the Naval Criminal Investigative Service pulled information from the phones of Law and Salazar-Quintero.

Maj. Kendra Motz, a spokeswoman for 1st Marine Division, told Task & Purpose the unit involved was 1st Battalion, 5th Marine Regiment, the same unit where Law and Salazar-Quintero were assigned. She added that all the Marines arrested or detained were between the ranks of Private First Class and Corporal.

“1st Marine Division is committed to justice and the rule of law, and we will continue to fully cooperate with NCIS on this matter,” the release said. “Any Marines found to be in connection with these alleged activities will be questioned and handled accordingly with respect to due process.”

The Marines arrested on Thursday were not assigned to the southwest border mission, the release said.

“We are aware of the charges facing Lance Cpl. Law and Lance Cpl. Salazar-Quintero, and we continue to cooperate fully with the investigative efforts into this matter,” Marine spokesman 1st Lt. Cameron Edinburgh previously told Task & Purpose.