The gunshot wound that killed Lance Cpl. Riley S. Kuznia was not self-inflicted. 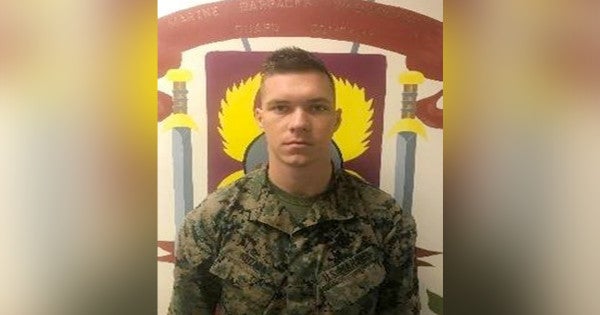 The Marine who was shot and killed at Marine Barracks Washington on Tuesday has been identified as Lance Cpl. Riley S. Kuznia, 20, of Karlstad, Minnesota, Corps officials have announced.

The gunshot wound that killed Kuznia was not self-inflicted, said Gunnery Sgt. John Jackson, a spokesman for Marine Barracks Washington, who offered no further information about how the shooting happened.

“The incident itself is still under investigation, so at this point that's really all the details that I can confirm, but I can confirm it was not a self-inflicted gunshot wound,” said Jackson, who declined to say if another Marine has been arrested in connection with Kuznia's death.

His mother Markelle Kuznia told the Associated Press on Wednesday that the Marine Corps has not explained to her how her son died.

She said her son joined the Marine Corps in 2017 and planned to marry his high school girlfriend.

“He just wanted to serve. Ever since he was little, he talked about being a solider,” she told the AP.

Kuznia served as a team leader for the Guard Company at Marine Barracks Washington, a base news release said. His military awards include Global War on Terrorism Service Medal and the National Defense Service Medal.

“We are truly saddened by this terrible loss,” Col. Don Tomich, commander of the Marine installation, said in a news release. “Riley was a highly driven and goal-oriented Marine whose positive attitude set the example here at the barracks. Our thoughts and prayers are with Riley's family and friends, and our priority continues to be taking care of them during this tragic time.”

SEE ALSO: A Marine Has Been Shot Near Commandant's House In Washington, Is In Stable Condition