The Marine Corps has identified the five Marines who died in a KC-130J Hercules crash off the coast of Japan... 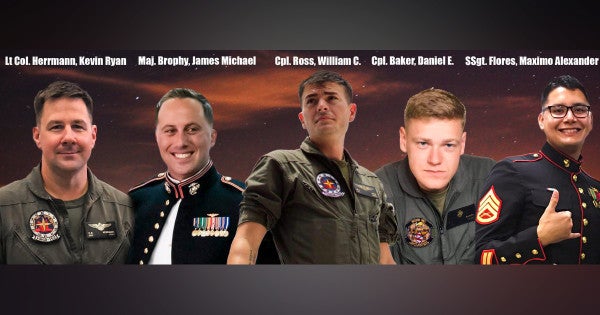 The Marine Corps has identified the five Marines who died in a KC-130J Hercules crash off the coast of Japan on Dec. 6.

The fallen Marines were assigned to Marine Aerial Refueler Transport Squadron 152 (VMGR-152) and onboard a KC-130 refueling aircraft when a mishap occurred with a Marine F/A-18 Hornet.

“They were exceptional aviators, Marines, and friends whom will be eternally missed,” Lt. Col. Mitchell T. Maury, commanding officer of VMGR-152, said in a statement. “Our thoughts and prayers remain with their families and loved ones at this extremely difficult time.”

The crash remains under investigation. A previous news release said both planes were flying a training exercise about 200 miles off the Japanese coast when the accident happened.

A search and rescue effort for the missing Marines was called off on Dec. 11.