The investigation cited inadequate oversight of training and operation by squadron leaders, an unprofessional command climate within the squadron, and the Hornet pilot's lack of proficiency at flying mid-air refueling missions at night 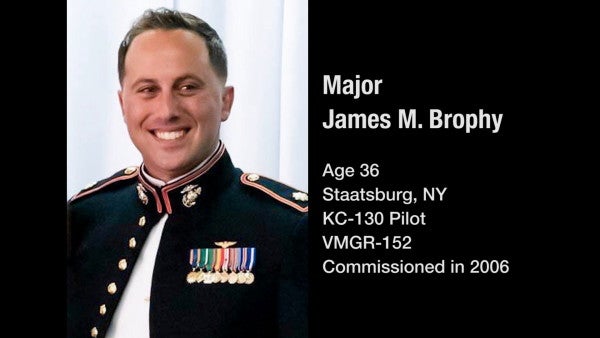 The top leaders of a Japan-based Marine Corps F/A-18D Hornet squadron were fired after an investigation into a deadly mid-air collision last December found that poor training and an “unprofessional command climate” contributed to the crash that left six Marines dead, officials announced on Monday.

Five Marines aboard a KC-130J Super Hercules and one Marine onboard an F/A-18D Hornet were killed in the Dec. 6, 2018 collision that took place about 200 miles off the Japanese coast. Another Marine aviator who was in the Hornet survived.

The results of a command investigation into the incident found that the F/A-18D pilot “lost situational awareness, unintentionally crossed over the top of the KC-130J from left to right, and collided with the rear of the tanker,” according to a Marine Corps news release.

The investigation found the F/A-18D pilot was not experienced in conducting mid-air refueling missions at night and that the attempted move to the left side of the KC-130J was “a non-standard maneuver.”

Both the F/A-18D Hornet and KC-130J Super Hercules had been properly maintained and there was no evidence that either aircraft malfunctioned prior to the crash, the news release says.

However, investigators found several human factors within Marine All Weather Fighter Attack Squadron 242, to which the Hornet pilot was assigned, did play a role in the deadly collision, including inadequate oversight of training and operation by squadron leaders, an unprofessional command climate within the squadron, and the Hornet pilot's lack of proficiency at flying mid-air refueling missions at night.

As a result, the squadron's commanding officer, executive officer, operations officer, and aviation safety officer were all fired after the commander of the 1st Marine Aircraft Wing lost confidence in their ability to lead, the news release says.

Lt. Col. James Compton, who was relived as the squadron's commanding officer, told Task & Purpose that he accepts responsibility for the crash, but other factors were involved in what happened. He also called the other squadron leaders who were relieved, “Some of the finest officers that I've ever served with.”

“The main thing here is we had a tragic loss of life,” Compton said on Monday. “The role that I played in not being able to mitigate that or stop that is something that I will carry with me for the rest of my life. I don't know that it's any comfort to the families, but I wish deep in my heart of hearts that there was something I could have done to have seen this coming and to have ultimately prevented it.”

Compton submitted 37 reports during his time in command that made the squadron's readiness challenges clear, said Compton, who has not read the investigation. Shortly before the crash, the Defense Department had cancelled a joint exercise between U.S. military aviation units and the South Korean Air Force amid a major push for peace with North Korea.

That led Compton to believe the squadron's operations tempo would slacken, but the 1st Marine Aircraft Wing did not reduce operational requirements, said Compton, who questions why the mission had to take place at 1:45 a.m., which was not his idea.

“In my heart of hearts, I wish I could have been stronger about standing up to the tasking,” Compton said. “Ultimately, I don't hide from my responsibility as a commander. When you have something like this that occurs, ultimately the commander is responsible, and I understand that.”

“I have taken responsibility,” he continued. “Other commanders – and by that, I mean more senior ones – did not seem to feel that same weight of responsibility. I'm not sure why.”

UPDATE: This story was updated on Sept. 23 to include that Assistant Marine Corps Commandant Gen. Gen. Gary Thomas has appointed a consolidated disposition authority to look whether any members of the squadron should face disciplinary or administrative actions.