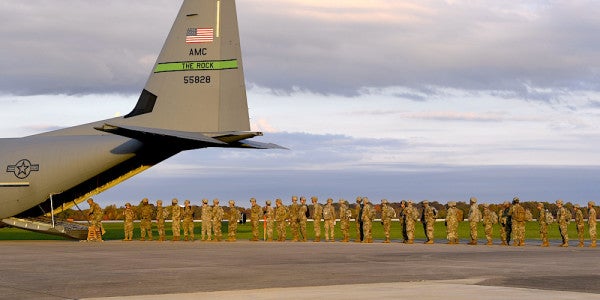 Tom note: Here is the first entry in our 10 Long March posts for 2018, the 10th most-read item of the year, which originally ran on October 31, 2o18. These posts are selected based on what's called 'total engaged minutes' (the total number of time spent reading and commenting on an article) rather than page views, which the T&P; editors see as a better reflection of Long March reader interest and community. Thanks to all of you for reading, and for commenting–which is an important part of this column.

We do not live in normal times, but rather in an age of morally compromised leadership. The Trump administration is preparing to send 5,000 U.S. military personnel to the United States’ southern border. There is no legitimate military purpose for this operation. Border crossings are near historical lows, and the so-called “caravan” of hungry, frightened migrants poses no risk to U.S. national security.

Instead, this operation is a political stunt. The administration aims to leverage the military’s credibility in support of its hysterical anti-immigrant propaganda campaign, which is itself a component of a partisan mid-term electoral strategy.

Neither the Secretary of Defense nor any other senior military leader will whisper a word of objection to this political stunt.

Recall that Secretary of Defense James Mattis served as a prop when the president signed his Muslim ban at the Pentagon. Recall also that Mattis helpfully offered DoD facilities to support the president’s policy of separating migrant children from their parents when detained at the border.

To be sure, Mattis has a world-class press operation designed to leak selected postures of toughness which alight the internet. However, if you’ve bet your life that Jim Mattis will discover his spine in the face of presidential political exploitation, you’re already dead.

2. …and that includes the courts

Absent unambiguously criminal misconduct, the courts will not overrule senior military commanders. In the unlikely event that military dissenters prevail in court, such victories will be pyrrhic at best. These ‘triumphs’ will occur years after the fact, and dissenters’ careers and reputations will be ruined nonetheless. Protections against adverse administrative action are even scanter.

Corrupt commanders can punish dissenters via efficiency reports that document “quibbling,” “inefficiency” and other user-defined terms not subject to appeal.

3. Beware the bait and switch

Mattis and other senior leaders will cover their tracks with an elaborate bait and switch. The deployment orders will conform strictly to the letter of the law. Everything they say and write in public will be squeaky clean. As public and media attention fade, flag officers will pressure mid-level commanders to:

Your results may vary, but a valid planning assumption is that most of these mid-level commanders will adopt Mattis’ invertebrate posture.

4. Know the law, and know lawyers

U.S. law contains a thick web of prohibitions against the activities described above. To achieve the bait and switch, senior commanders will use sloppy, tough guy language and count on troops to fill in the blanks. Senior military officers aren’t dummies — they will never say, “Detain and question the people crossing the river.” It will be more like, “Those @$$h0les don’t get across the river – you got me?” When it goes south (pun intended), they’ll deny authorizing detention and interrogation.

To prevent this scenario, troops must know enough law to ask clarifying questions such as “Are you directing me to detain this person? To arrest them? To seize their property?” At a minimum, troops must have the sense of consult a JAG when senior commanders put them in these situations.

5. Put it in writing

The best you can do is to document every action in writing and transmit it to your commanders via email. When you get that order to “not let those @$$h0le$ cross the river,” your detailed operational report should follow. It should include your clarifying questions to the chain of command and the JAG, the guidance you received, the actions you took and the judgment you exercised.

Word documents aren’t enough — like true love, hard drives fade with time. Email is better — unlike true love, email lasts forever. Be sure to use SIPR or NIPR as appropriate, as the same commanders who issued unlawful orders will cover their tracks by jamming you up on classification violations.

“Senior commanders are smart enough to avoid putting unlawful and morally ambiguous orders in writing — that’s how they got to be senior commanders.”

Unlike the administration, Congress and the chain of command, the press has a vested interest in getting the truth out. Junior officers in morally hazardous positions should know at least two reporters who are dedicated to the defense beat. When I was on active duty walking the tightrope of advocating for COIN, I relied on Tom Ricks (then of the Washington Post) and Greg Jaffe (then of the Wall Street Journal), among others.

First and most importantly, both are people of good character who will keep their promises on the conditions of a discussion — off the record, on background, or on the record.

Second, beat reporters have an additional incentive to keep their word and cultivate relationships. They cover DoD full-time, and are exquisitely careful to get the facts right and protect their sources, lest they squander their credibility in the future.

Finally, the press is the only lever that has the slightest chance of causing movement in an otherwise supine U.S. Congress.

7. You’re screwed either way, but take care of your soul

Even (especially?) if you do everything right, morally corrupt leaders will do all they can to cover their tracks with your bones.

Intimidation is the preferred method for deterring pesky questions, and selective memory loss is the go-to technique when the scandal finally breaks. You may face the untenable choice of ending your career as a captain for asking hard questions or ending your career in Leavenworth for failing to do so. There is no easy way out of this dilemma, but you would do well to take the long view.

Perhaps you are part of a faith tradition in which you know that one day you and you alone will have to account for your choices. You are certainly part of a human family and a civic community that reject “just following orders” as a defense for criminal behavior. Maybe one day you will have grandchildren. If so, spare them the indignity of laying a coward’s bones in your grave.