National Guard Maj. Adam DeMarco explains why he chose to testify before Congress on the precarious position the U.S. military was put in during the June clearing of Lafayette Square — and what it means for civil-military relations 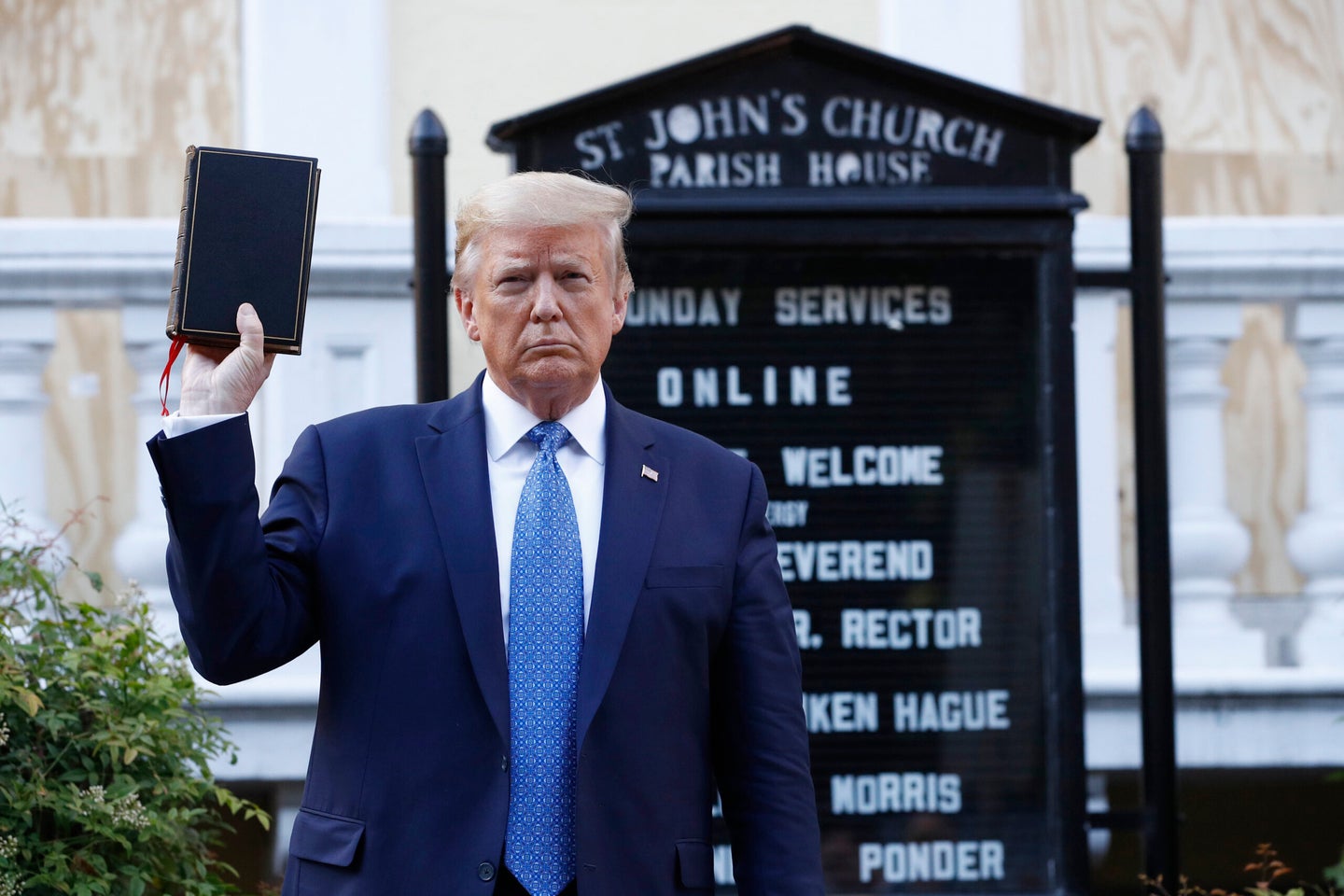 At West Point, cadets are inculcated in the ethics, values, and virtues of our time-honored profession of arms. From the Army Values to the Soldier’s Creed, and even Schofield’s Definition of Discipline, we spent hours reciting these mantras in rote memorization drills as we aspired to be selfless leaders who would abide by and follow them to become “a commissioned leader of character committed to the values of Duty, Honor, Country and prepared for a career of professional excellence and service to the Nation as an officer in the United States Army.”

However, one of the most important and foundational aspects of West Point — the quintessence of my Rockbound Highland home — is the Cadet Honor Code: a cadet “will not lie, cheat, steal, or tolerate those who do.” In an institution that is nearly as old as this nation, there is arguably no more important aspect of leadership than living honorably and holding those who commit ethical offenses accountable for their actions. Its purpose is to foster a commitment to moral-ethical excellence and is policed and enforced by the cadets themselves.

But ask any cadet and they will tell you that one of the most difficult aspects of living under this Honor Code isn’t just not lying, never cheating, or at no time stealing, but living up to the toleration clause. The Honor Code doesn’t just demand that we not engage in those behaviors — it also demands that we not tolerate them from others.

While you may know me as the whistleblower from Lafayette Square, and while my testimony has been subjected to scrutiny across the political spectrum, the reason why I came forward is simple: in the aftermath of the forceful clearing of peaceful protestors from Lafayette Square, numerous political leaders across the U.S. government began to abdicate responsibility for that day’s events and then began to lie to the American people. As I watched them reach for “alternative facts” and use those to justify their actions, I fell back on the simplest of principles: a cadet will not lie, cheat, steal, or tolerate those who do. It compelled me to act.

On June 1st, I was serving as a liaison between the United States Park Police and the District of Columbia National Guard, in response to the civil unrest and civil disturbances that occurred in the aftermath of George Floyd’s death. On May 30th and 31st, those protests out front of the White House were unequivocally violent and riotous, which resulted in six National Guard members injured along with countless federal law enforcement officers and culminated with the attempted burning of the historic St. John’s Church.

However, and as I stated under oath to the United States Congress, the next day, June 1st, was different: my testimony, coupled with countless other testimonies and archived media footage back up my account that the demonstrators that day were largely peaceful. There was no violence that day until the decision was made to clear protestors from the area of Lafayette Square by the United States Park Police so the president could have a photo-op in front of St. John’s.

As the subsequent actions after the clearing commenced are still subject of numerous lawsuits, investigations, and litigation, what I can say is that what transpired in the moments, hours, and days after were abhorrent and the continual political spin were reprehensible. From claims that the protestors were violent to claiming that tear gas wasn’t used, the misinformation that poured from our supported civilian agencies jeopardized the trust our community and country places in the National Guard and armed forces.

In stepping forward to hold those accountable by giving my fact-based account of that day to the United States Congress, I put both my personal and professional life in a precarious situation. However, understanding these risks, I believe the greater peril was in my toleration of the actions, complicity, and connivance of that day.

In coming forward, I am truly blessed to have earned the support of fellow service members and veterans from across this nation. Men and women from different branches of service, across different generations, all united in one common purpose. And while we don’t always share political beliefs and our policy views are as diverse as our backgrounds, we are committed to ensuring that the freedoms we exercise every day — paid for by the sacrifices of generations past — are protected for future generations.

In this difficult time for our nation, it seems expedient to eliminate moral guidance and allow ourselves to be released from moral responsibility. It feels convenient to keep saying honorable words without backing them with honorable actions. But the U.S. military can’t allow itself to fall prey to that. The values we protect are essential to the viability of our constitutional republic. The United States cannot survive if its military loses its moral principles, virtue ethics, and trust of the American people.

At Lafayette Square, our soldiers faced a difficult and complex mission: protecting the rights of American citizens and enabling the exercise of their First Amendment rights while protecting and defending key national infrastructure and historic monuments. With that simplified mission statement, as uniform service members who swore an oath to support and defend the Constitution of the United States, the actions to disperse peaceful demonstrators for what I later surmised was for a photo opp ran directly antithetical to the oath of office that I swore.

Thankfully, our forces were not ordered to and did not engage in any offensive actions that would violate the moral and legal rights of American citizens. However, we certainly were placed in a position that if an order, or “request for assistance,” had come from one of the many civil agencies to our soldiers on the line that day, we may have had a completely different, and darker scenario altogether. The potential images of uniformed American soldiers forcefully engaging American citizens with batons and riot shields outside of the “People’s House” would harken back images of the Kent State massacre and would forever change the course of American history.

While keeping good order and discipline is integral to the military establishment, and following lawful orders is legally required under the Uniform Code of Military Justice, the operations in Lafayette Square created moral confusion for a political stunt that our soldiers were used to promulgate. While there is always a “fog of war” in any operation, service members must always adhere to the rules for the use of force and escalation of force and are held accountable to those lawful orders. As a force of ethical and moral professionals, we need absolute clarity about the propriety and legality of our actions and those of our supported civil agencies. When we stood in Lafayette Square on that fateful day, we did not have that.

In the days after, I saw the moral clarity instilled by the ethics, values, and virtues that I have espoused since my days at West Point being challenged and countermanded by the moral confusion of our civilian leadership. The Uniform Code of Military Justice accounts for such confusion by requiring soldiers to refuse to follow unlawful orders; it is as important a rule as those that require soldiers to follow orders. It protects the military from the corruptive influence of unlawful behavior, and guards against immoral leadership using the military to advance corrupt agendas.

However, it is not always easy for soldiers to find guidance when they receive orders they know are unlawful or illegal especially in the context of civil-military operations. The moral courage needed to stand firm on your values, principles, and convictions — even when threatened — doesn’t arrive heralded and generally comes at great personal cost.

Furthermore, in standing up for and acting upon the very things that we know to be honorable, or illegal, there is little guidance or support for those service members who believe that they may be ordered to violate our military values and ethics in executing an unlawful order. For instance, the JAG Corps works for the institution — not the Soldier — and the hesitation that comes from the very notion of challenging orders can sometimes make it difficult for soldiers to meet their responsibilities, therefore further testing their personal courage and resolve and threatening their ability to uphold the values they affirm and oaths they swore.

That is why I’m supporting the Orders Project, which aims to provide pro bono resources to U.S. service members who need counsel, advice, and in extreme cases, legal representation when facing ethical dilemmas related to unlawful orders. This service will provide an important avenue for reflection in moments of moral crisis, allowing service members to understand how to best honor their commitments to our nation, and it will reinforce the primacy of our values, ethics, and virtues over the confused morality of modern society.

The trust that the American people have placed in our men and women in uniform is one that has been earned over the course of 245 years. As custodians of liberty and stewards of freedom, our Armed Forces continue to serve as the moral and ethical beacon of the United States to the world. However, we’d be remiss to recognize that as the political discourse in America continues to degrade and the divides between us widen, there is a clear and present danger to our institution where our service members may be thrust into unlawful or illegal actions or events for personal or political gains.

It is with these nearly certain situations and scenarios within civil-military operations that our service members need support in standing up for our shared common values and standing up against potentially unlawful and illegal orders. This is why the Orders Project was established: to support and defend those who support and defend, to ensure that all service members regardless of rank are empowered to uphold the highest commitment to ethical values, virtue, and honor — and, as the Honor Code states, to not tolerate those who fail to.

Related: At West Point, they swore an oath to serve the public interest. As high public officials, they’ve forsaken it