"From my observation, those demonstrators — our fellow American citizens — were engaged in the peaceful expression of their First Amendment rights." 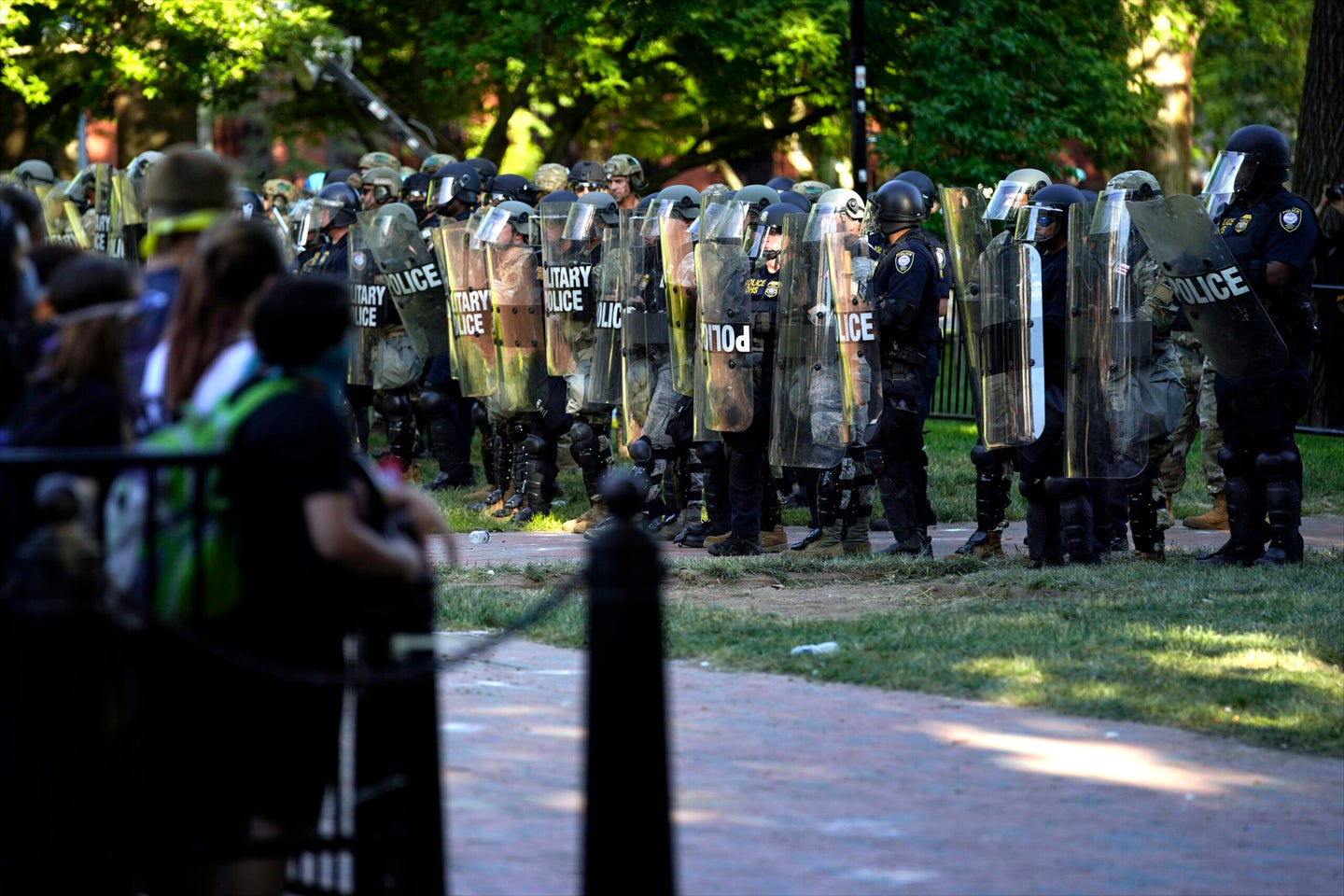 Protestors outside the White House were “engaged in the peaceful expression of their First Amendment Rights” in June when police aggressively cleared them from the area ahead of President Donald Trump's public appearance, an Army National Guard officer plans to tell lawmakers on Tuesday.

Maj. Adam DeMarco — a West Point graduate who deployed three times while in the active-duty Army, and joined the D.C. National Guard in 2014 — was “one of the senior DC National Guard officers” in the area on the evening of June 1, according to his submitted testimony to the House Committee on Natural Resources.

DeMarco said in his testimony that protestors were “subjected to an unprovoked escalation” by law enforcement who cleared them from the area before Trump arrived at St. John's Episcopal Church — just outside the White House — where he gave brief remarks and took photos holding up a bible.

The demonstrators were protesting the death of George Floyd, an unarmed Black man, at the hands of Minneapolis police officers in May.

There were around 250 members in the D.C. National Guard's “Task Force Civil Disturbance” at Lafayette Square on June 1, DeMarco said, tasked to “provide support for the Park Police.” He added no guardsmen were armed with lethal or non-lethal munitions.

When they arrived, DeMarco said he was informed their job would be to move behind Park Police while the police cleared an area outside the White House, establishing a new security perimeter. He said he “did not know” the rules of engagement issued to police in regard to their use of force with protestors.

Shortly after 6 p.m., Gen. Mark Milley, chairman of the joint chiefs of staff, walked towards the National Guard with Attorney General Bill Barr. After briefing Milley on their mission, according to DeMarco, Milley said that the guardsmen were to stay calm, reminding him they were there “to respect the demonstrators' First Amendment rights.”

It was only 6:20 p.m. — after Milley and Barr had left the area — when Park Police started telling protestors that they needed to leave the area. DeMarco said the announcements were “barely audible” as they were being delivered through a megaphone around 50 yards away from the demonstrators.

“I saw no indication that the demonstrators were cognizant of the warning to disperse,” DeMarco said. He added that he “did not expect” the announcements to come so soon, as the curfew “was not due to go into effect” for 40 more minutes.

But 10 minutes later, police started their clearing operation with the help of the Secret Service and “other law enforcement agencies” that DeMarco was unable to identify.

DeMarco said that he started hearing “explosions and saw smoke being used to disperse the protestors,” and while the police liaison told him that it was “stage smoke” and not tear gas, DeMarco said that he felt “irritation in my eyes and nose,” and recognized it as tear gas based on his exposure to it during Army training.

After relocating to the northeast corner of Lafayette Park, DeMarco said that he saw Park Police's Civil Disturbance Unit start pushing demonstrators further down the street.

“From my vantage point, I saw demonstrators scattering and feeling as the Civil Disturbance Unit charged toward them,” he said. “I observed people fall to the ground as some Civil Disturbance Unit members used their shields offensively as weapons. … I also observed unidentified law enforcement personnel behind our National Guardsman using 'paintball-like' weapons to discharge what I later learned to be 'pepper balls' into the crowd.”

Once the street was cleared of demonstrators, Trump arrived with his security detail; DeMarco said he hadn't been briefed on the president's arrival, calling it a “complete surprise.”

Trump has defended the events on June 1, tweeting the next day that people “liked my walk to this historic place of worship” and sharing an article that said tear gas was never used.

The same day, Acting Chief of U.S. Park Police, Gregory Monahan, said in a statement that the protestors were “violent” and became “combative” as they began the clearing operation.

But DeMarco saw something different.

In his testimony, DeMarco said what he observed that night was “deeply disturbing,” and that as someone who understands how to assess the environment in a combat zone, he never felt “threatened” by protestors or saw them be violent.

“From my observation, those demonstrators — our fellow American citizens — were engaged in the peaceful expression of their First Amendment rights,” he said, describing the police's actions as “an unprovoked escalation and excessive” force.

“The oath I swore as a military officer, to support and defend the Constitution of the United States, is a bedrock guiding principle and, for me, constitutes an individual moral commitment and ethical instruction,” DeMarco concludes. “It is the foundation of the trust safely placed in the Armed Forces by the American people.

“And it compels me to say something – and do something – about what I witnessed on June 1 at Lafayette Square.”