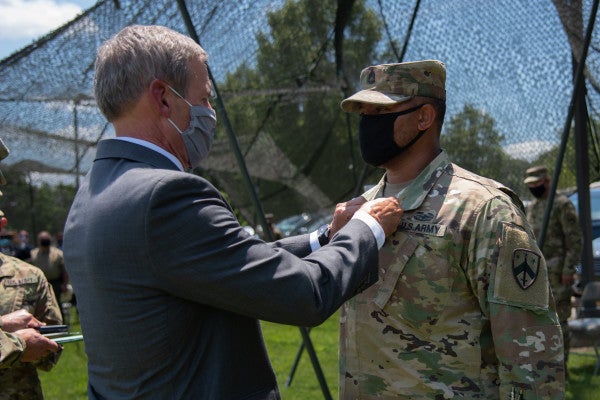 A soldier with the Tennessee National Guard was awarded the Soldier's Medal on Friday for heroically stopping a shooting after a high school football game in 2018.

Sgt. 1st Class Patrick Shields, who has served with the Tennessee Guard for 24 years, was cleaning up his tailgate with his brother after his son's homecoming football game in October 2018 when they “heard a bunch of kids hollering and yelling across the street” at a Walgreen's, Shields told USA Today at the time.

Shields said he looked over and saw one teenager with a pistol in his hand, and “a bunch of kids” running towards them. So he ran towards the parking lot and disarmed the 16-year-old shooter.

“I just grabbed his hand and fell to the ground with him,” Shields said in a Defense Department press release. “I didn't want anybody to take the gun, so I held him there until police arrived.”

Tennessee Gov. Bill Lee presented the Soldier's Medal to Shields on Friday. Maj. Gen. Jeff Holmes, Tennessee's Adjutant General said in the release that Shields' actions are “a validation of his character.”

But Shields said he was only doing “what I thought anybody else would've done in my situation.”

“He exhibited the courage that every Soldier is trained to exhibit and aspires to achieve. He fully encompasses all of the Army and is such a positive example to all of us,” Holmes said. “He acted with great instincts and his impressive act of courage and bravery saved countless lives that day.

“We are truly proud of him and his selfless service.”