“We are like the Swiss Army knife of the DoD." 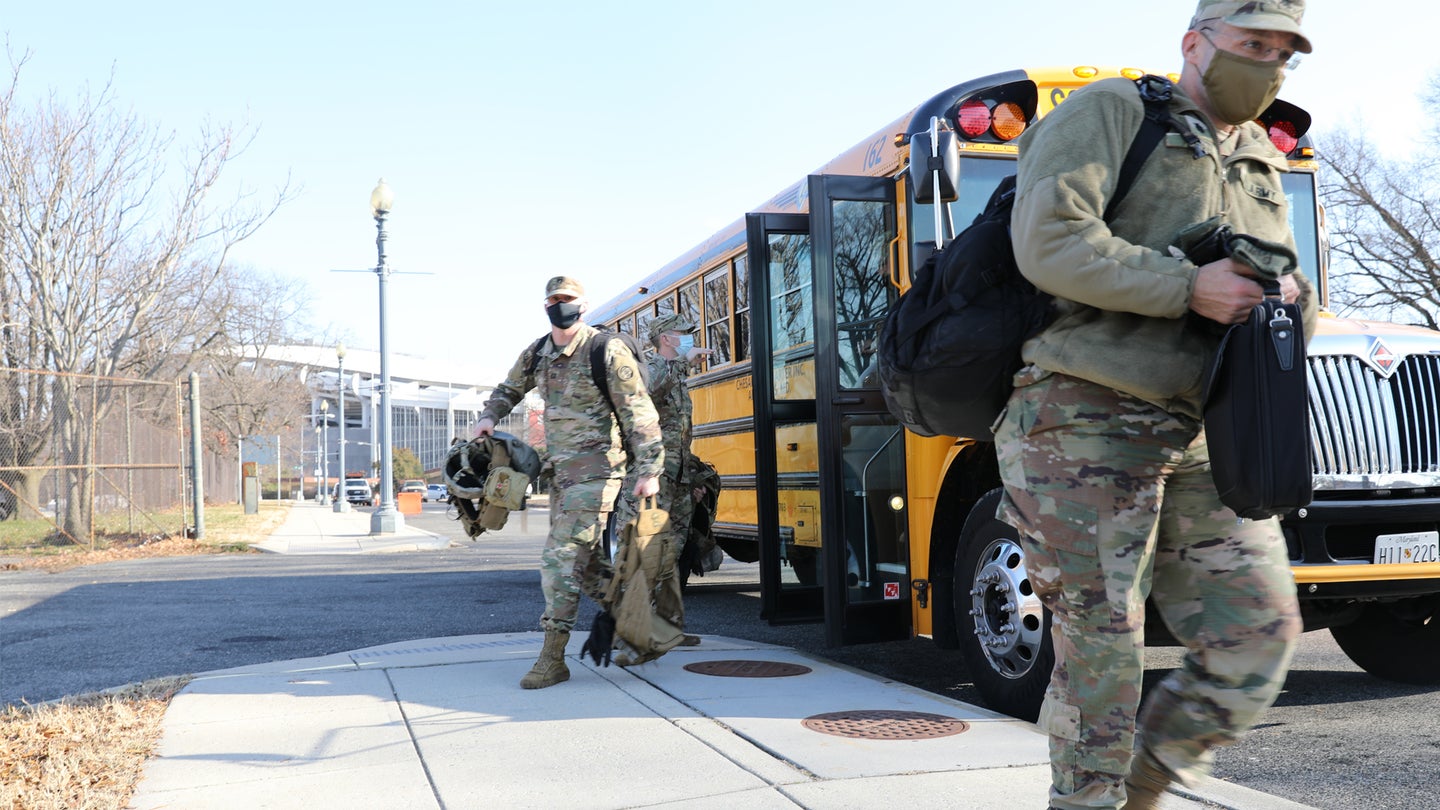 Whoever had “National Guard school bus drivers” on their 2021 bingo card should go buy a lottery ticket, because that’s the latest mission added to a growing list for National Guardsmen around the country.

Massachusetts Gov. Charlie Baker is mobilizing up to 250 Guardsmen to help with school transportation because of a school bus driver shortage. The vehicles the Guardsmen will be driving, 7D vehicles, carry a maximum of 10 passengers not including the driver. As of Tuesday, 90 Guardsmen had begun training to assist with transportation.

Boston Public School officials estimated that roughly 60 bus driver positions in Boston are open, according to NBC Boston. The Boston school bus drivers’ union said the school district gave them “more than 100 additional routes than they’ve had in prior years at the last minute.” Baker “suggested the program could expand” on Monday, according to NBC Boston, as more communities have expressed interest in having Guardsmen fill in empty bus driver positions.

“As with any school transportation worker, all activated Guard personnel will complete vehicle training to ensure the safety of children and families,” a press release says. “Drivers will meet all statutory requirements for 7D drivers. Throughout the mission, the Guard will comply with all health and safety measures.”

“School bus driver fill-in” is just the latest in a seemingly never-ending list of jobs the National Guard has taken on in the last year. In fact, deploying the National Guard as a duct-tape fix for any and every problem is fast becoming the norm.

Just days before Guardsmen were assigned to “pick up” and “drop off” duty, a councilman in Queens, New York, asked New York Gov. Kathy Hochul to send the National Guard to the Rikers Island Correctional Facility to fill the gaps of a staffing shortage. That’s on top of all different missions Guardsmen have been mobilized for over the last year.

Between responding to the novel coronavirus (COVID-19) pandemic — during which Guardsmen assisted at testing sites, vaccination sites, and hospitals — they also mobilized for wildfires, hurricanes, the southwest border mission, civil unrest throughout the country, and scheduled deployments around the world. As a result, the National Guard has been stretched to the limit.

As of Tuesday morning, more than 59,000 National Guardsmen of the force’s total 440,000 are activated for domestic and overseas missions, according to the National Guard Bureau. More than 12,450 of those soldiers and airmen are supporting COVID response operations. At one point in 2020, just over 120,000 Guardsmen were activated on a single day around the world.

“The events of 2020 required an unprecedented response to various unforeseen events within the homeland,” The National Guard Bureau said in a statement to Task & Purpose. “Most significantly, the men and women of the National Guard served more than 7.6 million days in support of the COVID-19 pandemic — a mission that continues today. They provided over 632 million meals to neighbors, distributed over 539 million pieces of personal protective equipment to essential workers, and tested or screened over 16.1 million people for the virus across the 50 states, 3 territories and the District of Columbia in 2020.”

Retired Army Col. Michael Linick, a defense researcher at the RAND Corporation, told Task & Purpose in March that mobilizations over the last year are “a wider, broader, deeper usage of the Guard over a longer period of time than what we’ve typically seen in the past.”

The strain on the National Guard was made clear this summer as officials warned that the Guard would soon go broke if Congress didn’t pass emergency funding to reimburse them for costs from the Capitol Hill response mission after Jan. 6. Lawmakers did eventually provide that funding, $521 million, in time to meet the National Guard’s deadline.

Before the funding was secured, however, National Guard leaders spoke to reporters about the work their soldiers and airmen had done over the last several months. Adjutant generals from Indiana, Illinois, and Massachusetts explained how their troops had been working to address need after need not only within their states but around the country.

“We are like the Swiss Army knife of the DoD [Department of Defense],” Brig. Gen. John Driscoll, the Army Guard commander of the Massachusetts Army National Guard, told reporters in July.

“The thing about the National Guard is we’re that one organization that not only has a federally-deployed, go-to-war, national security mission, but we also have that mission here at home,” Maj. Gen. Richard Neely, adjutant general of Illinois, added. “We support for our states during emergencies, which we’ve seen during COVID, we’re seeing right now in California as we’re flying missions in wildfires, we have hurricanes come on the coast in Florida as they did a few weeks ago. The National Guard is there.”

To help keep track of what the National Guard has been doing, we’re compiling a running list of missions. As of Sept. 14, 2021, here are the missions Guardsmen around the country have been tasked with: