"Here's the bottom line: This was a mistake," Milley said. 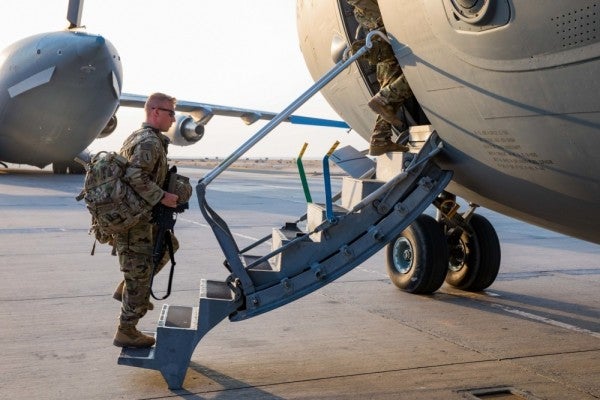 A letter sent to the Iraqi government and circulated on Monday that appeared to claim the U.S. was preparing to withdraw from Iraq was a draft that “should not have been released,” according to Joint Chiefs Chairman Gen. Mark Milley.

The letter, which posted on Twitter and confirmed as authentic by Task & Purpose, said Combined Joint Task Force – Operation Inherent Resolve would be “repositioning forces over the course of the coming days and weeks to prepare for onward movement.”

BREAKING: The US military sends a letter to the Iraqi military announcing the “onward movement” of US troops “in due deference to the sovereignty of Iraq & as requested by the Iraqi Parliament & the Iraqi PM”. It’s a withdrawal. pic.twitter.com/tQHSsHTtez

But soon after it had made the rounds, Defense Secretary Mark Esper briefed reporters alongside Milley on Monday afternoon, saying that there has been “no decision made to leave Iraq. Period.”

Moments after Esper and Milley left the briefing, Milley returned, having just gotten off the phone with Gen. Frank McKenzie, the commander of U.S. Central Command. He told reporters that McKenzie told him the letter, a draft, was sent to Iraqi military personnel “in order to get things coordinated for air movements,” and then was passed to another person, and mistakenly leaked.

“It was a mistake — an honest mistake, a draft, unsigned letter — because we are moving forces around and we have increased helicopter movement in Iraq between Baghdad, Taji, and other camps and stations,” Milley said. “We’re moving forces all over the place.”

On Sunday, Iraqi lawmakers voted to kick U.S. troops out of the country, though it isn’t official and would need to be signed off on by the Prime Minister. U.S. forces also paused training of Iraqi troops in the mission to defeat ISIS in order to focus on security of bases housing American troops.

This is the living embodiment of trying to recall an email that's already been opened. https://t.co/YLXQtfBbV3

General Milley has just said the letter regarding troop movements out of Iraq was a draft, and releasing it was a "mistake." It was however delivered to the Iraqi military. It seems the U.S. military is as confused as everyone else about what their intentions are.

Sorry for all the letters, but wanted to make sure you got letter re: withdrawal.

Read the full transcript of Gen. Milley’s second briefing with reporters below:

Here’s the bottom line: This was a mistake.
I just got off the phone, literally, seconds ago with [U.S. Central Command commander Marine Gen.] Frank McKenzie, who called directly into these guys; and it was a mistake – an honest mistake. A draft, unsigned letter because we are moving forces around and we have increased helicopter movement in Iraq between Baghdad and Taji and other camps and stations. And we’re bringing in people in from Kuwait. So we’re moving forces all over the place, right?

Q: In and out.
Well, we’re bringing guys in, remember. [Inaudible] We’ve moved forces, deployed forces. So there’s increased levels of U.S. troop movements – rotary wing helicopters and stuff like that. And he told me. He just told me. He used other words that were a little bit more colorful than ‘mistake.’ Something that the Army infantry and the Marine infantry might use.

So anyway, bottom line is he said: ‘Hey, it should never have happened. Draft.’ And he said: ‘We understand U.S. government policy. Nobody’s leaving. No onward movement. We got all that. Honest mistake. Draft.’ And it was sent over to some Iraqi military guys in order get things coordinated for air movement, etc. And it went from that guy’s hands into another guy’s hands and then it went into your hands and now it’s a kerfuffle. It’s all over the news.

Q: If it was just a draft, why was it given to the Iraqis?
Coordinate. Synchronize. Coordinate. I don’t know. Collaborate. We do this all …

Q: But it’s not a draft if you send it …
It’s a draft. It’s not signed. We coordinate drafts – I do. I coordinate drafts all the time. I send drafts all over Washington, D.C., that aren’t signed to get people’s input, feedback, and what do you think? And now they got the feedback, right? The long and the short of it is: It’s an honest mistake where people are trying to do the right things in highly dynamic situations, etc. And it should not have been sent. And Gen. McKenzie recognizes that and people in the chain recognize that.

So I’m here – I walked down here intentionally because I see it’s all over the place – breaking news, etc. – in order to get control of that because that can have second- and third-order effects in a lot of directions. We’re in a very dynamic situation and it can have a lot of consequences – a lot of directions. And I don’t want to be misunderstood: That letter is a draft. It was a mistake. It was unsigned. It should not have been released. And the first part of it, which says: ‘In due deference … as requested … repositioning forces over the coming days and weeks to prepare for onward movement;’ poorly worded; implies withdrawal. That’s not what’s happening.

Q: General, the last sentence is underlined in your notes. What does it mean when it says: We respect what the Iraqi government has done?
I think it says what it says …

Q: Gen. Milley …
‘We respect your sovereign decision to order our departure.’

Q: But, sir, the bottom line is nobody is leaving Iraq at this time.
Right …

Q: Separate question. Gen. Milley …
And linked to the previous question about non-binding I think that was in the previous one that the secretary answered. The long and short of it is: I get it. Very dynamic. The letter gets out. The words – I can read the English language. I knew what the words say as soon as I read it. And it’s incorrect.

Q: Gen. Milley, is it your view that U.S. forces should stay or attempt to persuade the Iraqis to keep U.S. forces in?
Whatever advice I give on strategic matters, I’ll give them to the president of the United States in the confines of a confidential conversation between he and I.