Are we staying in Syria? Are we pulling out? If you have no clue what the answer to this question is, trust me, you're not alone. 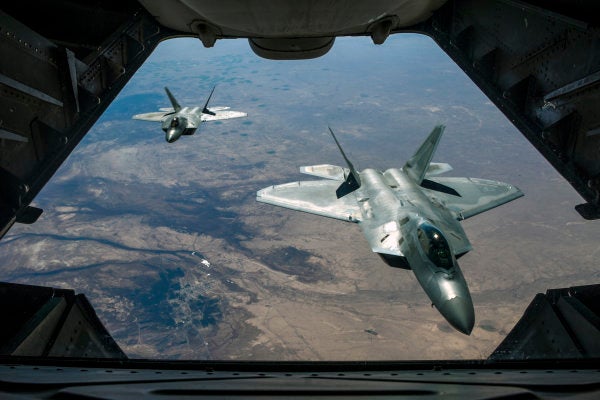 Is the United States staying in Syria? Is it pulling out? When? If you have no clue what the answers are, trust me, you're not alone.

In the latest version of this story which seems to change every five minutes, a State Department official said on Friday there was “no timeline” for the withdrawal of roughly 2,000 U.S. troops in Syria. Which is quite different from the “rapid withdrawal” everyone was hearing just 16 days ago.

So how did we get here? What is actually going to happen in Syria? This roundup of what's happened since the president first announced he was pulling out on Dec. 19 shows where we are at so far.

WATCH NEXT: Air Force A-10 Pilots Awarded For Saving 50 US Troops In 'Danger Close' Air Strike In Syria

​Dec. 19, 2018: President Trump tweets that “we have defeated ISIS in Syria, my only reason for being there during the Trump Presidency.”

We have defeated ISIS in Syria, my only reason for being there during the Trump Presidency.

On that same day, The Wall Street Journal and The Washington Post report that Trump ordered a “rapid withdrawal” of troops from Syria. “The U.S. immediately began moving a handful of personnel from Syria and will quickly extract about 2,000 forces over the next few weeks,” the Journal reported.

Dec. 19, 2018: Trump releases a video in which he declares we “have won” against ISIS and says our troops are coming home.

In a statement issued to reporters, Sarah Sanders said the U.S. had “defeated the territorial caliphate” and claimed that troops were already on their way home.

“Five years ago, ISIS was a very powerful and dangerous force in the Middle East, and now the United States has defeated the territorial caliphate,” Sanders said in the statement.

“These victories over ISIS in Syria do not signal the end of the Global Coalition or its campaign. We have started returning United States troops home as we transition to the next phase of this campaign. The United States and our allies stand ready to re-engage at all levels to defend American interests whenever necessary, and we will continue to work together to deny radical Islamist terrorists territory, funding, support, and any means of infiltrating our borders.”

Pentagon officials tell The New York Times that the withdrawal was ordered to be completed within 30 days.

Dec. 20, 2018: Defense Secretary Jim Mattis resigns in protest of Trump's decision to withdraw, which would leave Kurdish allies at the mercy of Turkey.

Defense officials tell me Mattis went to the White House to discuss Syria & that he was livid after reading reports that Turkey's Defense Minister threatened to kill US-backed Kurds & put them in ditches once the US withdrew. He was incensed at this notion of betrayal of an ally

Mattis' resignation letter, while critical of the president's views on foreign policy, did not mention Syria, but officials told The New York Times that Mattis traveled to the White House on Thursday “in a last attempt to convince Mr. Trump to keep American troops in Syria. He was rebuffed, and told the president that he was resigning as a result.”

Dec. 20, 2018: Trump, after proclaiming ISIS was defeated 24 hours prior, now says the U.S. is leaving so that other countries will go in and fight.

….Russia, Iran, Syria & many others are not happy about the U.S. leaving, despite what the Fake News says, because now they will have to fight ISIS and others, who they hate, without us. I am building by far the most powerful military in the world. ISIS hits us they are doomed!

“Getting out of Syria was no surprise. I've been campaigning on it for years, and six months ago, when I very publicly wanted to do it, I agreed to stay longer. Russia, Iran, Syria & others are the local enemy of ISIS. We were doing there work. Time to come home & rebuild,” Trump said in one tweet, before adding:

“Does the USA want to be the Policeman of the Middle East, getting NOTHING but spending precious lives and trillions of dollars protecting others who, in almost all cases, do not appreciate what we are doing? Do we want to be there forever? Time for others to finally fight…..”

Dec. 23, 2018: Gen. Robert Neller, the commandant of the Marine Corps, tells his Marines he has “no idea” on withdrawal specifics.

While visiting his troops in Afghanistan, Gen. Robert Neller was asked by a Marine about Trump's recent order to withdraw all troops from Syria and about half from Afghanistan, according to a report by The Wall Street Journal's Ben Kesling.

“That's a really good question. And the honest answer is I have no idea,” Neller answered. To another gathering of Marines, the four-star general said, “I don't think anybody really knows exactly what's going to happen. I've read the same stuff in the newspaper you did, I have a little more knowledge than that, but not a whole lot more.”

I just had a long and productive call with President @RT_Erdogan of Turkey. We discussed ISIS, our mutual involvement in Syria, & the slow & highly coordinated pullout of U.S. troops from the area. After many years they are coming home. We also discussed heavily expanded Trade.

President @RT_Erdogan of Turkey has very strongly informed me that he will eradicate whatever is left of ISIS in Syria….and he is a man who can do it plus, Turkey is right “next door.” Our troops are coming home!

“The execute order for Syria has been signed,” Cmdr. Sean Robertson, a Pentagon spokesman, told Task & Purpose in an email. “I am not going to provide more operational details at this time.”

If anybody but Donald Trump did what I did in Syria, which was an ISIS loaded mess when I became President, they would be a national hero. ISIS is mostly gone, we’re slowly sending our troops back home to be with their families, while at the same time fighting ISIS remnants……

“I think we're in a pause situation where we are re-evaluating what's the best way to achieve the president's objective of having people pay more and do more,” Graham told The New York Times.

“He promised to destroy ISIS. He's going to keep that promise,” Graham added. “We're not there yet, but as I said today, we're inside the 10-yard line and the president understands the need to finish the job.”

Jan. 2, 2019: Pentagon officials convince Trump that the order to withdraw from Syria within 30 days should be extended to at least four months.

As CNN reported, the new 120-day timeline is the minimum amount of time needed to execute Trump's order in a “safe and orderly manner.” The New York Times also reports the new four-month timeline for withdrawal.

Jan. 2, 2019: During a cabinet meeting, Trump tells reporters he disagrees with the four month timeline.

Per the White House transcript:

Q Mr. President, you used the word “slowly” when you were describing withdrawal from Syria.

THE PRESIDENT: Yeah, I never said fast or slow. Yeah, I just —

Q What's your timetable? When do you want troops to be out?

THE PRESIDENT: I don't know — somebody said four months, but I didn't say that either. I'm getting out — we're getting out of Syria.

Look, we don't want Syria. Obama gave up Syria years ago when he didn't violate the red line. I did, when I shot 59 missiles in, but that was a long time later. And when President Obama decided not to violate his statement that never crossed the red line, and then they did, and he didn't do anything about it — you know, making a threat is okay but you always have to follow through with the threat if you're going to make that threat. You can't make a threat and then do nothing.

Jan. 4, 2019: Meanwhile, the Pentagon's own data on air strikes show that ISIS is far from defeated.

Jan. 4, 2019: Senior State Department official says there is “no timeline” for a Syria withdrawal.

NEW: Sr State Dept official tells reporters: "We have no timeline for our military forces to withdraw from Syria… It will be done in deliberate, heavily coordinated way with allies and partners" to "maintain pressure on ISIS throughout" and prevent "any vacuum for terrorists."

“The next phase of U.S. support to the coalition's operation in Syria is a deliberate and coordinated withdrawal of forces while taking all measures possible to ensure our troops' safety and protection,” Navy Cmdr. Sean Robertson, a Pentagon spokesman, told Task & Purpose.

“Out of concern for operational security, we will not be discussing troop movement, timelines or progress of this deliberate withdrawal. The OIR mission has not changed. We will continue to fight to achieve an enduring defeat of ISIS.

We will continue to work with partners and allies to ensure the enduring defeat of ISIS through sustaining military gains and promoting regional security and stability. We thank every member of the coalition for their contributions to the fight against ISIS.”

Jan. 6, 2019: National Security Advisor John Bolton says U.S. withdrawal from Syria will only happen on the condition that Turkey ensure the safety of Kurds.

“The timetable flows from the policy decisions that we need to implement,” he said. “We don't think the Turks ought to undertake military action that's not fully coordinated with and agreed to by the United States,” Bolton said.

Jan. 7, 2019: Trump says “we will be leaving at a proper pace while at the same time continuing to fight ISIS,” a complete reversal from his claim in December that the troops were “coming back now” since “we won” against ISIS.

The Failing New York Times has knowingly written a very inaccurate story on my intentions on Syria. No different from my original statements, we will be leaving at a proper pace while at the same time continuing to fight ISIS and doing all else that is prudent and necessary!…..

Everyone who has read this far: