CENTCOM commander Gen. Votel: ‘I was not consulted’ on Trump’s decision to leave Syria

The commander of U.S. Central Command testified to the Senate Armed Services Committee on Tuesday that he was as surprised as anyone else when President Donald Trump tweeted in December that U.S. forces would be leaving Syria. 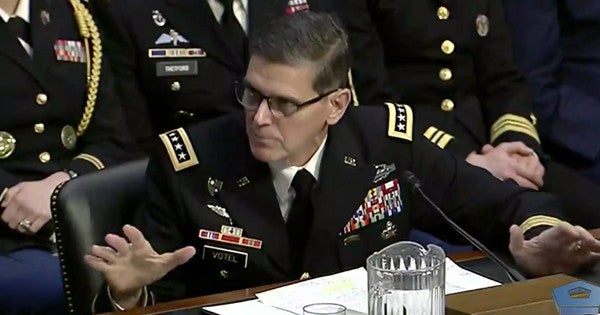 The commander of U.S. Central Command testified to the Senate Armed Services Committee on Tuesday that he was as surprised as anyone else when President Donald Trump tweeted in December that U.S. forces would be leaving Syria.

“I was not aware of the specific announcement,” Gen. Joseph Votel said in response to a question from Sen. Angus King (I-Maine). “Certainly we are aware that he expressed a desire and an intent in the past to depart.”

On Dec. 19, Trump tweeted that “we have defeated ISIS in Syria, my only reason for being there during the Trump Presidency,” before following up with a video claiming that the troops have “won” against ISIS and they were “coming home.” The New York Times and Washington Post reported that some 2,000 U.S. forces were ordered to conduct a rapid withdrawal.

But the senior commander of those troops, Votel, didn't even get a courtesy calI: “I was not consulted,” he said. The decision to rapidly withdraw from Syria was the catalyst for then-Defense Secretary Jim Mattis' resignation.

Besides Votel being left out of the loop at the time, the Commandant of the Marine Corps previously admitted to his Marines that he had “no idea” on specifics regarding the troop withdrawal. Since then, the decision to withdraw troops from Syria has been slowed down to a “deliberate and coordinated” departure, according to a Pentagon spokesman.