CENTCOM commander Gen. Votel: ISIS will be back 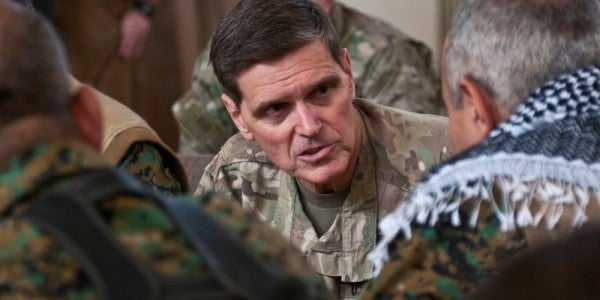 Syrian Kurdish and Arab fighters have cornered ISIS fighters in the village of Baghouz, the terrorist group plans to go underground and wage an insurgency long after it has been cleared from its last stronghold, the head of U.S. Central Command told lawmakers on Thursday.

“We should be clear that what we are seeing now is not the surrender of ISIS as an organization – but a calculated decision to preserve the safety of their families and preservation of their capabilities by taking their chances in camps for internally displaced persons and going to ground in remote areas and waiting for the right time to resurge,” Army Gen. Joseph Votel said at a House Armed Services Committee hearing.

“Recent observations by our men and women on the ground highlight that the ISIS population being evacuated from the remaining vestiges of the caliphate largely remain unrepentant, unbroken and radicalized,” Votel continued. “We will need to maintain a vigilant offensive against this now widely dispersed and disaggregated organization that includes leaders, fighters, facilitators, resources and – of course – their toxic ideology.”

It is now up to the international community to determine what to do with the thousands of ISIS fighters and their families now in the custody of the Syrian Democratic Forces, Votel said. These detainees can “sow the seeds of future violent extremism” if they are not correctly taken care of, he said.

For more than a year, U.S. military officials have claimed that only about 2,000 ISIS fighters remained in Syria, but the waves of ISIS fighters and their families who have surrendered during the Baghouz offensive suggests the Syrian Democratic Forces have been fighting an enemy much larger than that.

The SDF is holding more than 2,000 ISIS fighters in custody, the Wall Street Journal reported, and SDF spokesman Mustafa Bali tweeted on Tuesday that 3,500 had been evacuated from ISIS' last enclave, of which 500 were ISIS fighters who surrendered.

Army Col. Sean Ryan, a spokesman for the U.S.-led coalition fighting ISIS in Syria and Iraq, declined to provide an updated estimate of how many ISIS fighters have been killed or captured in Syria's Middle Euphrates River Valley.

“The number of fighters in the MERV was always based off intelligence estimates from the battlefield, and with full recognition the enemy works and hides within a complex tunnel system throughout the region and we will never fully know the exact number,” Ryan told Task & Purpose. “With that said, the mission was always to degrade ISIS capabilities to conduct military operations, while simultaneously destroying their logistical, media, and financial based systems.

“It was never about the number killed and the ultimate victory is based off an enduring defeat that will ensure ISIS cannot regenerate their capabilities and threaten the security of the region and our homelands.”

On Thursday, Rep. Elise Stefanik (R-N.Y.) asked Votel what the next phase of the war against ISIS will look like as fighters go underground.

“This will look very much like an insurgency,” Votel replied. “We will see low level attacks. We'll see assassinations. We'll see IED attacks. We'll see ambush-type things as they begin to emerge from this. Therefore, what our focus has to be is working with our partners on the ground as we're doing fairly effectively in Iraq right now. We are going to have to keep pressure on this.”

WATCH NEXT: Soldiers Pound ISIS Fighters in Syria From New Fire Base