Afghan Taliban insurgents are battling fighters loyal to Islamic State over control of territory in eastern Afghanistan in some of the heaviest clashes over the past year between the rival militants, officials said on Wednesday. 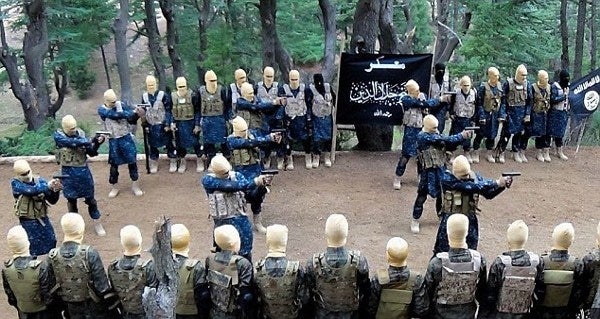 KABUL (Reuters) – Afghan Taliban insurgents are battling fighters loyal to Islamic State over control of territory in eastern Afghanistan in some of the heaviest clashes over the past year between the rival militants, officials said on Wednesday.

The fighting erupted on Monday in two districts of the eastern Afghan border province of Nangarhar, when Islamic State fighters attacked villages under Taliban control.

“Islamic State fighters have captured six villages in Khogyani and Shirzad districts but the fighting has not stopped,” said Sohrab Qaderi, a member Nangarhar's the provincial council.

About 500 families had fled from the fighting, he said.

Casualty figures were not available.

A spokesman for the Taliban, who control more territory than at any point since they were ousted from power nearly 18 years ago, was not available for comment.

Islamic State fighters first appeared in eastern Afghanistan in around 2014 and have battled the Talibanas well as government and foreign forces.

The Afghan affiliate of Islamic State, sometimes known as Islamic State Khorasan (ISIS-K), after an old name for the region that includes Afghanistan, has made some inroads into other areas, in the north in particular.

It has also established a reputation for unusual cruelty, even by the standards of the Afghan conflict, and has been behind some of the deadliest attacks in urban centers.

While Nangarhar, on the border with Pakistan, has been an Islamic State stronghold, some villages in Khogyani and Shirzad districts have been controlled by the Taliban.

Fleeing villagers said they had to run for their lives.

“I could only rescue my family. We had to leave everything,” said Shawkat, 36, a resident of Markikhel village in Shirzad district who sought safety in a neighboring village.

Attaullah Khogyani, a spokesman for the provincial governor said, authorities would help the displaced villagers with food and medicine.

In August, more than 150 Islamic State fighters surrendered to the Afghan security forces after they were defeated by the Taliban in the northwestern province of Jawzjan.

The U.S. military estimates there are about 2,000 Islamic State fighters in Afghanistan.

Many are former Taliban. There is scant evidence of direct links with Islamic State in the Middle East, where the group has lost territory it once held in Syria and Iraq to Western-backed forces.

(Reporting by Abdul Qadir Sediqi in Kabul and Ahmad Sultan in Nangarhar; Editing by Robert Birsel)

WATCH: This guy reportedly sent his resume to ISIS