Don’t Worry, The Taliban Is Totally Cool With Sharing Power In Afghanistan

An official of the Taliban militant group, which now reportedly controls nearly half of Afghanistan, says the militant group is not seeking to rule Afghanistan alone in any future government structure and wants to co-exist with current institutions 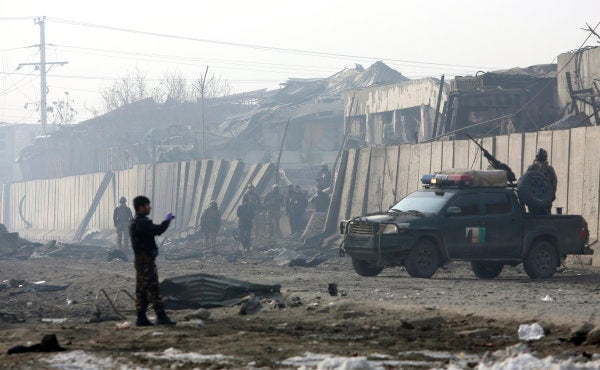 An official of the Taliban militant group, which now reportedly controls nearly half of Afghanistan, says the militant group is not seeking to rule Afghanistan alone in any future government structure and wants to co-exist with current institutions.

The statement by Taliban spokesman Suhail Shaheen on January 30 appears to be unusually conciliatory and apparently was aimed at easing concerns among Afghan leaders opposed to any peace deal that includes the insurgent group.

Shaheen, speaking in an audio message to the Associated Press, said the Taliban want to live alongside their countrymen “in an inclusive Afghan world.”

The Taliban controlled the Afghan government before being driven from power in 2001 by a U.S.-led invasion after it refused to end support for Al-Qaeda terrorists following the September 11 terror attacks in the United States.

Taliban leaders, who took control in 1996, imposed a harsh form of Islamic law that denied education and work to women and girls as they cracked down on other social activities. They were accused by international groups of human rights violations.

Taliban militants are currently involved in negotiations in Qatar with Zalmay Khalilzad, the U.S. special representative for Afghanistan reconciliation. The militant group has so far refused to deal with the government in Kabul and has insisted foreign troops must leave before it will agree to a peace settlement.

Both the Taliban and Khalilzad have said that progress has been made in the Qatar talks, and the U.S. envoy this week said that “agreements in principle” had been reached toward a framework for peace.

In his statement, Shaheen stated that the Taliban were not seeking a “monopoly on power” as part of their peace talks. Many observers said the remarks could provide Khalilzad greater leverage as he seeks to gain backing from Afghanistan's leadership for his peace efforts.

“After the end of the occupation, Afghans should forget their past and tolerate one another and start life like brothers. After the withdrawal , we are not seeking a monopoly on power,” said Shaheen, who is based in Qatar, site of a Taliban political office.

Shaheen told the AP that another round of talks with Khalilzad is scheduled for February 25 in Doha, the Qatari capital.

The developments come as a U.S. oversight agency reports that the Taliban expanded its territory in Afghanistan in 2018.

The Special Inspector General for Afghanistan Reconstruction (SIGAR) on January 30 said the Kabul government now controls or influences about 54 percent of Afghan districts, down from 64 percent a year earlier.

The Taliban itself has been beset by internal divisions. Afghan officials last year reported that clashes between separate Taliban factions killed dozens of militants in the country's west.

SEE ALSO: The Army Won't Say If Afghan Forces Can Handle A U.S. Withdrawal Yet