Almost every US metric for the war in Afghanistan ‘is now classified or nonexistent,’ so obviously things are going swimmingly

So, how goes the never-ending war in Afghanistan? According to United States's top government oversight authority there, well, we don't know and can't say 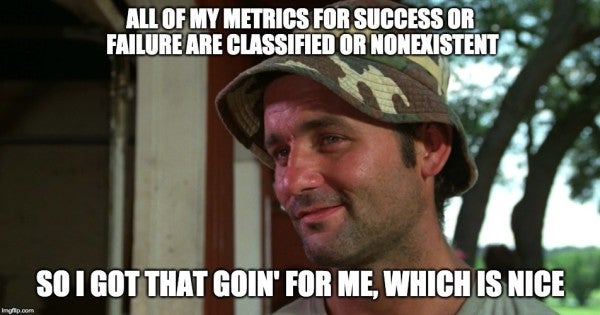 So, how goes the never-ending war in Afghanistan? According to the United States's top government oversight authority on it, well, we don't know and can't say.

“Almost every indicia, metric for success or failure is now classified or nonexistent,” John F. Sopko, the Special Inspector General for Afghanistan Reconstruction (SIGAR), told Wednesday. “Over time, it's been classified or it's no longer being collected … The classification in some areas is needless.”

To be clear, Sopko isn't just saying that the Pentagon has opted to keep more information on its progress in Afghanistan classified — he's saying that the Pentagon has outright ceased gathering critical data on whether the United States is actually succeeding or failing after sinking 17 years, 2,400 fallen service members, and $900 billion dollars into a seemingly endless conflict.

This isn't just alarming statement coming from a government watchdog, but a level of mind-numbing epistemic gymnastics on par with Donald Rumsfeld's “unknown unknowns.”

To be clear, there are lots of things we know about the progress of the geopolitical albatross known as the U.S. military campaign in Afghanistan — and they're all fucking dismal. Here's a depressingly non-comprehensive list:

However, it's worth noting that the separate issue of increasing over-classification of assessments of Afghan war effort has become well-worn territory for SIGAR. In 2017, Sopko explicitly noted that new restrictions on once-public information on the state of Afghan security forces — including “casualties, personnel strength, attrition, capability assessments, and operational readiness of equipment” — only ends up hurting the watchdog's ability to keep Americans informed of how their tax dollars are spent.

“More than 60% of the approximately $121 billion in U.S. funding for reconstruction in Afghanistan since 2002 has gone to build up the ANDSF,” Sopko said at the time in SIGAR's October 2017 quarterly report to Congress. “The increased classification of ANDSF data will hinder SIGAR's ability to publicly report on progress or failure in a key reconstruction sector.”

Part of the responsibility, Sopko said, lies with the Afghan government: Long mired by issues of corruption and ongoing spats over political legitimacy, the central government in Kabul in recent years has demanded that certain data on the state of Afghan security forces shared with the Pentagon not be made public.

“I don't think it makes sense,” Sopko said on Wednesday, per Defense One. “The Afghan people know which districts are controlled by the Taliban. The Taliban obviously know which districts they control. Our military knows it. Everybody in Afghanistan knows it. The only people who don't know what's going on is the people who are paying for all of this and that's the American taxpayer.”

But this allergic reaction to transparency doesn't just belong to Kabul. In January, President Donald Trump complained during a televised cabinet meeting that the public nature of Afghanistan progress reports were probably undermining U.S. reconstruction there.

“What kind of stuff is this?” he told Acting Secretary of Defense Patrick Shanahan on the latter's first full day on the job. “The enemy reads those reports; they study every line of it…. I don't want it to happen anymore, Mr. Secretary. You understand that.”

Speaking to reporters on Wednesday, Sopko stopped just short of calling bullshit on the commander-in-chief.

“I know this became a big deal at a press conference at the White House about why is this information being discussed publicly,” Sopko said. “Well, by law we have to.”