Casualties reported after US Special Forces team ambushed in Afghanistan

"A combined U.S. and Afghan force conducting an operation in Nangarhar Province was engaged by direct fire on Feb. 8." 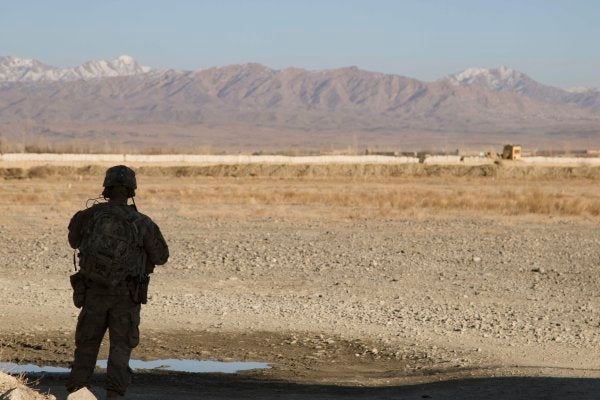 A U.S. Special Forces team partnered with its Afghan counterparts was ambushed in a possible “green-on-blue” attack on Saturday, resulting in at least two Americans killed and six others wounded, a source familiar with the matter told Task & Purpose.

The attack, first reported by NBC's Courtney Kube, happened while the team from 7th Special Forces Group was on a mission in Nangarhar Province. Col. Sonny Leggett, a spokesman for U.S. Forces-Afghanistan, confirmed the attack in a statement to Task & Purpose.

“Two U.S. service members were killed and six others were wounded in a firefight on Feb. 8 in Sherzad district, Nangarhar province,” Leggett said. “The wounded service members are receiving medical treatment at a U.S. facility. Upon completing a key-leader engagement at the district center, current reports indicate an individual in an Afghan uniform opened fire on the combined U.S. and Afghan force with a machine gun.”

The incident is under investigation, Leggett added.

The 7th Special Forces Group (Airborne) tweeted on Saturday that the families of the soldiers who were killed and wounded are being notified.

“Several 7th SFG(A) Soldiers were injured or killed during combat operations in Afghanistan on February 8, 2020. The families of the deceased and wounded are being notified. In accordance with DoD policy, the names of the causalities are being withheld until 24 hours. pic.twitter.com/R22ilulOcx

As The New York Times reports, the Taliban and the Islamic State's Afghanistan branch “have had a foothold in Nangarhar Province.”

Afghanistan's defense ministry issued a statement on Saturday confirming that the gunman who opened fire on U.S. and Afghan troops was wearing an Afghan uniform.

“A high level MoD delegation led by the Chief of the Army Staff Bismillah Waziri is investigating the incident together with the U.S. team in Nangarhar,” the statement says.

Insider attacks within the Afghan security forces are nothing new. A recent report from the Special Inspector General for Afghanistan Reconstruction put into perspective just how common they are — in the last quarter of 2019, there were 33 insider attacks from the Afghan National Defense and Security Forces, resulting in 90 casualties.