'General Miller carries the weapon which makes the most sense from a METT-T [Mission, Enemy, Terrain, Troops, and Time] perspective. General Miller, in Farah Province in 2019, was armed with a M1911.' 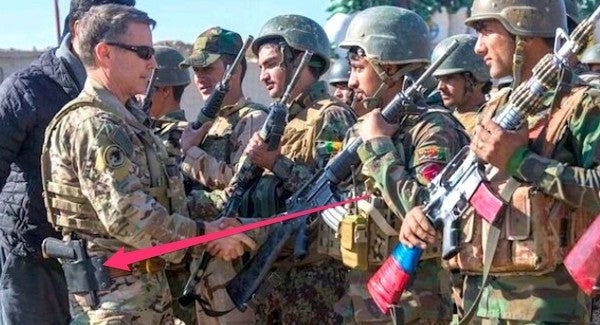 Rest assured, enthusiasts of the old and distinguished .45 caliber pistol: Army Gen. Austin Miller has not abandoned his M1911A1 for a newer, younger Glock 19.

Miller, who leads all U.S. troops in Afghanistan, has used the .45 as his general officer assigned weapon since 2009. A former Delta Force operator, Miller first used the M1911A1 in 1992.

Since the Army no longer issues .45 caliber pistols to soldiers, the fact that Miller still uses the older weapon has fascinated gun enthusiasts. (An easy way to start a fist fight is to ask pistol aficionados if the .45 caliber round has more “stopping power” than 9mm ammo.)

But eagle-eyed Ian D'Costa of Military Times first reported that a picture of Miller that was shared on Instagram appears to show the general equipped with a Glock 19 pistol, a common sidearm for Army Rangers in combat zones.

For a minute, it seemed as though the M1911A1 had lost its Chuck Norris. But Miller's spokesman confirmed to Task & Purpose that the general has not been forced to retire his trusty .45.

“General Miller carries the weapon which makes the most sense from a METT-T [Mission, Enemy, Terrain, Troops, and Time] perspective,” Leggett said. “General Miller, in Farah Province in 2019, was armed with a M1911.”

It was not immediately known if Miller has ever engaged targets by firing both pistols at the same time.